We Bought One of Everything at IKEA 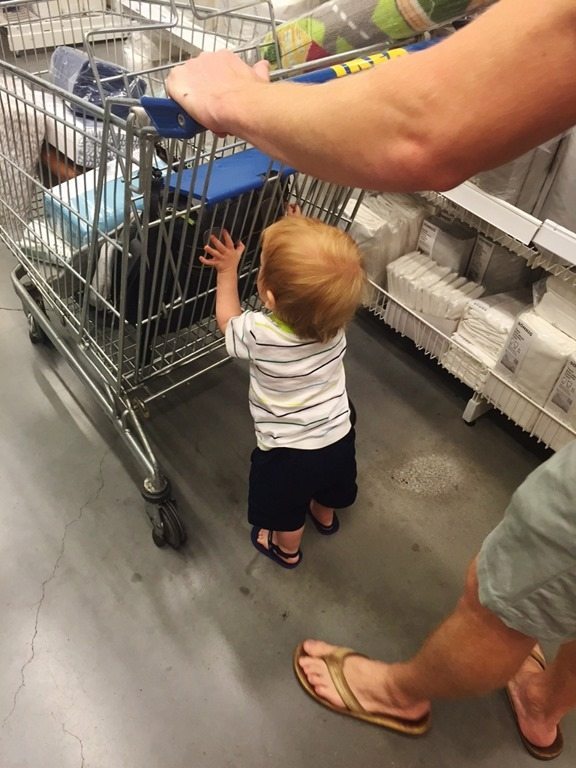 How’s your week going so far? Our little family has been quite busy with plenty of unpacking, organizing, and shopping. We took a trip to IKEA yesterday and it felt like we bought one of everything there. We also bought a new couch at the first place we looked, which we said we would never do again. Mal and I even reminded each other of this before we entered the store, but, hey, now we have a brand new sectional, right? Anyway, here’s a little recap from yesterday…

My morning didn’t start until almost 7:30 AM because my wonderful and amazing husband let me sleep in. Over the past few days, I developed some sort of weird irritation in my right eye, so he took early-morning baby duty, just in case it was “pink eye.” (We didn’t want to risk Quinn getting it since it’s so contagious.) I ate a quick breakfast before heading to the nearby Minute Clinic to get it checked out. I ended up having a stye in my eye (thank goodness it wasn’t pink eye!), so the NP on staff prescribed me some ointment and sent me on my way. I waited for the prescription in-store, so I used that time to stock up on all sorts of stuff. I rocked the coupons/sales and saved almost $30! Boom. Love that. After that, I ran a few errands and then returned home to Murphy just chilling in the back of Mal’s car. Heyyyy, Murph! Quinn was napping and Mal was wandering around the yard, trying to figure out how he’s going to manage so much yard work. He also told me that I need to learn how to mow the lawn. Ha! I helped Mal outside for a little while and then headed inside to make myself a smoothie. This one was mango, banana, SFH vanilla Recovery, Radiance Platinum Chocolate Superfood, soy milk, and ice. When Quinn woke up from his nap, we fed him lunch and then drove down to IKEA to do some serious shopping. Our first stop was the kids’ section to buy furniture for Quinn’s new playroom! He enjoyed checking out all of the different table + chair options. We ended up buying him this set for just $25. We also bought bar stools for the kitchen, a floor mirror for our bedroom, and a ton of textiles– everything from dishtowels and bathmats to rugs and sheets. We bought it all! We were en fuego at IKEA! After all of that hard work, we definitely needed some soft serve. After IKEA, we planned to quickly look at Jordan’s for a new couch. We had no intention of buying one, but then we did. Ok, we’ll never learn, but we ended up getting a great deal on an overstock couch. I can’t find the exact couch online, but it looks a lot like this one.

When we got home, Quinn and I went for a quick 2-mile run while Mal walked Murphy. Our new neighborhood is seriously awesome for running. The pavement is nice and smooth and if you run once all the way around, it’s just over 2 miles. Dinner was kind of random, but it worked. We ate sausage with peppers and onions for lunch, so I reheated it and then threw it on a bed of greens for a salad of sorts. It was pretty darn tasty! After that, Mal gave Quinn a bath and put him to bed while I worked late into the night. Around midnight, I ate a bowl of Rice Chex with banana slices, blueberries, and soy milk before I went to bed… and then I woke up 4:30 this morning to work some more. People, there aren’t enough hours in the day! Let’s play “Would You Rather!”

Shop at IKEA or Target?

Stay up late or wake up early?