So Many Celebrations on the Horizon 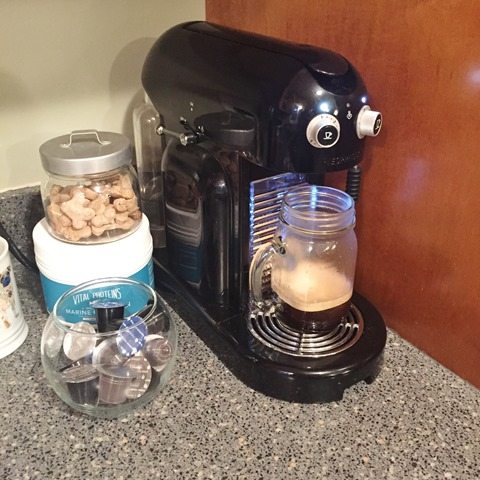 Yesterday started bright and early with a much-needed homemade almond milk iced latte made with our Nespresso machine. I received it at an event a few years ago (it was actually a few weeks before we told anyone I was pregnant) and we’ve loved it ever since. I drink decaf iced coffee most mornings, but every once in awhile, I need a little bit of caffeine to get going and espresso tends to be easier on my stomach than coffee, so my favorite go-to beverage is an iced latte. Pro tip for making iced lattes at home: After brewing your espresso, first add your milk (to cool it down) and then add your ice cubes. Don’t brew the espresso over ice because it will water it down. I recently discovered Gourmesso coffee capsules that are Nespresso machine-compatible, but cost quite a bit less compared to the Nespresso brand ($0.45-$0.55 per capsule versus $0.70 per capsule). Gourmesso sent me a few of their varieties to try, and they taste just like the Nespresso ones, but cost less. Love that. I drank my iced latte while folding laundry before dropping Q-Man off at daycare. When I got home, I immediately got to work, which included a certain someone desperately wanting to sit on my lap. Clearly, I can’t say no to that adorable pug face. A short while later, I took a quick break to whip up some breakfast, which was eggs with Breakfast Potatoes and ketchup. Mid-morning, I took another quick break to reheat a piece of Tomato, Basil & Goat Cheese Frittata. I spent the rest of morning glued to my laptop before switching gears to make lunch and some more Breakfast Potatoes since Mal and I already finished off the batch I made on Sunday.

While pre-heating the oven, I heard some strange noises coming from inside. Oh, crap! I forgot I hid a big bottle of bubbles from Quinn in there yesterday afternoon and it was starting to melt inside. GAH! Thankfully, it didn’t make a huge mess, but, OMG, I almost had a heart attack when I realized what was happening! After that, I made some Dirty Fried Rice, which included some chicken livers in its ingredients. Yep, that’s right… chicken livers. Nicole is trying to get me to eat liver on the regular, so she suggested this recipe, and I actually liked it quite a bit– even Mal was okay with it. Quinn wouldn’t touch it, but I’m not surprised. He won’t even eat regular rice! Ha! After lunch, it was back to work until the mailman rang our doorbell and Murphy went ballistic, barking and running around like a psycho. (He’s still freaked out by doorbells after all these years.) I opened the front door and was pleasantly surprised to see a special Mother’s Day package from my friends at General Mills. Inside was a box of Chocolate Chex and, of course, I dug right in! Speaking of Mother’s Day, it kicks off a bunch of celebrations for our family in the coming weeks. Check out what we have coming up:

Holy celebrations, right?! Anyone else have “cluster birthdays” like this in their family? June is definitely a popular month for us!

Anyway… total tangent there… back to my eats for the day…

In the afternoon, I shared a plum with Quinn and then dinner was more Dirty Fried Rice (2 servings) followed by a couple of Lindt chocolate truffles for dessert.

What celebration are you looking forward to most in the coming weeks?