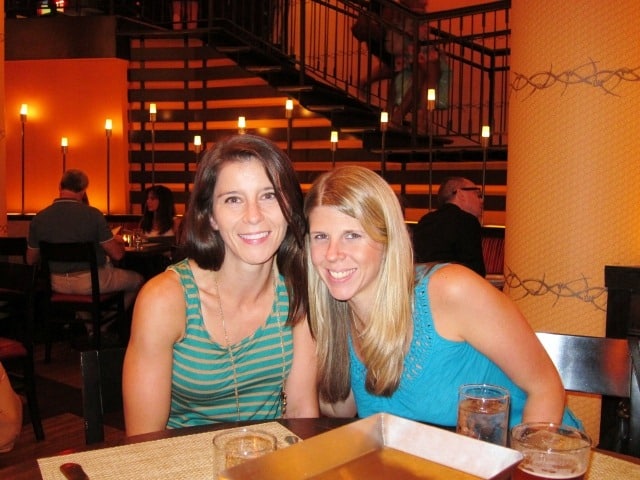 (FYI: Today’s Reebok event was awe-some. I have a ton of photos to organize and a couple of videos to upload to YouTube, so I’ll probably have my recap finished sometime tomorrow. It was such a great time””I can’t wait to tell you guys about it!)

After the Reebok event, Katelyn and I went back to Theodora‘s apartment to shower and get ready for the evening. On our walk, we popped into Starbucks. I thought once I walked in and got a whiff of coffee, I’d be dying to have one, but, surprisingly, it wasn’t that tough to resist. I guess the thought of iced coffee angering my colon turned me off. I ended up ordering a Passion iced tea and grabbing a banana for a snack. I have to admit, going cold turkey with my iced coffee addiction habit hasn’t been too bad. I figured I’d be miserable, but I’m doing much better than I thought. I got a couple of NoGii bars at the Reebok event, so I snacked on one of those when we got back to Theodora‘s apartment. It was good””kind of like a Larabar, but with more nuts. A few hours later, Theodora came home from work and then she, Katelyn, and I met Meredith at Rare Bar & Grill for dinner. (Jocelyn showed up a little while later to enjoy a drink with us.) Reunited at last! Theodora and I hadn’t seen each other in 3 whole months. I missed my friend! Our lovely dates, Katelyn and Meredith! At dinner, Theodora ordered a beer. I did not. For my dinner, I ordered a plain burger, which was just okay. With a restaurant name like Rare, I expected a really flavorful and juicy burger, but, sadly, this one was neither of those things. I ordered it medium, but it was pretty dry and bland inside. Boo. I still ate almost the entire thing.

On a more positive note, the coleslaw was (surprisingly) really good””probably the best I’ve ever had. I usually hate coleslaw and avoid it all costs, but this one looked really fresh, so I gave it a try””it was very lightly tossed in mayo, chopped, and made with fresh basil. Mmm! We also shared a French fry sampler among the table. I pretty much dominated the sweet potato fries. Theodora and I are back at her apartment now. We’re both pooped and need to get up early to grab the bus to Boston in the morning, so we’re heading to bed.