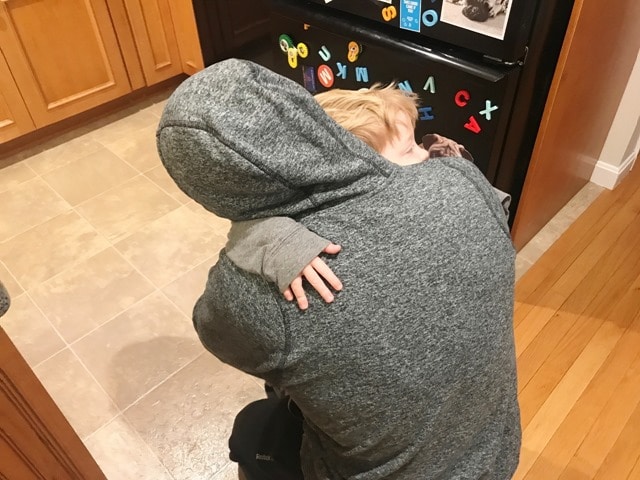 Mal said he had such a nice birthday this year. We had a small party at our house over the weekend and then continued the celebration on Tuesday, which was his actual birthday.

The morning started bright and early at 5:30 AM with Qman climbing into bed with me. Apparently, he was just too excited about Dada’s birthday to sleep! With presents in hand, we headed downstairs to wish Mal a happy birthday! Mal was already awake, drinking coffee in the kitchen, so our timing was perfect for helping him start his birthday on the right foot! 🙂 And presents! Look at Murphy… he thinks everything is for him! Even though Mal and I had said: no presents, I still felt like I should get him something, especially after he bought me such a thoughtful Mother’s Day gift. Mal and I are actually buying each other a very expensive home improvement project in the next couple of weeks, so we “supposedly” squashed the idea of getting each other presents for all of our upcoming celebrations. Long story short, I kept things simple and framed a really adorable photo that I took of Qman a few weeks ago. Mal loved it! 🙂 After that, I cooked Mal breakfast. He wanted cheesy scrambled eggs with toast, so I got to work! Meanwhile, the boys dug into Dada’s birthday croissant. Oh, yea, Dada also got a cat for his birthday. Meow! When Mal left for school, I got Qman ready for daycare. I dropped him off and then returned home to photograph one of the recipes that I’m developed for Muuna. Once I finished and cleaned up the kitchen, I grabbed my things and headed to Starbucks to work. While there, I ate my breakfast, which was Strawberry Cheesecake Overnight Oats – leftovers for my photo shoot. Mmm! So good! Around 11:00, I headed over to Orangetheory for a workout. It was my first of the week, so I was excited for a serious sweat session! And, my goodness, I was exhausted by the end! LOVE OTF!! After Orangetheory, I ran a couple of quick errands in the Shipyard before heading home for lunch. And, boy, was I hungry! I didn’t even bother with a shower. I walked in the front door and immediately reached into the fridge! Thanks to some Sunday prep, I threw together some shredded chicken with red cabbage, bacon, onion, and roasted parsnips. Delish! After that, I took a shower, got ready for the day, and dug into some dried baby bananas from Trader Joe’s. (Qman really likes these, too!) After that, I took Murphy for a walk and then headed back to Starbucks to work and wait for Mal to finish up at school. We made plans to go to an early dinner with Qman to celebrate his birthday, so I worked until he was on his way home.

Back at home, we grabbed a few toys and “the bus” to take to dinner with us and then hit the road to Rivershed. The start of dinner was a lot of fun. We cheered our drinks to Dada, used crayons to draw sharks, and played a couple of silly games at the table. But, then, I don’t know what happened. I guess maybe Qman was hangry, but he went into total tantrum monster mode. We eventually took him outside for a change of scenery. (Related: Rivershed has an awesome kid-friendly outdoor space!) Things got better after that, but dinner was definitely touch-and-go with a cranky kid. Even still, Mal enjoyed himself and we all had some good laughs on the way home! 🙂 How do you deal with your kid’s bad behavior at a restaurant?

Thankfully, there was a great outdoor space with lots of toys that ultimately changed Qman’s mood, but we seriously considered leaving a few times. It was a tough choice because Quinn was misbehaving, but it was Mal’s birthday and we didn’t want to ruin his special day either.