Your Happy Place In One Word 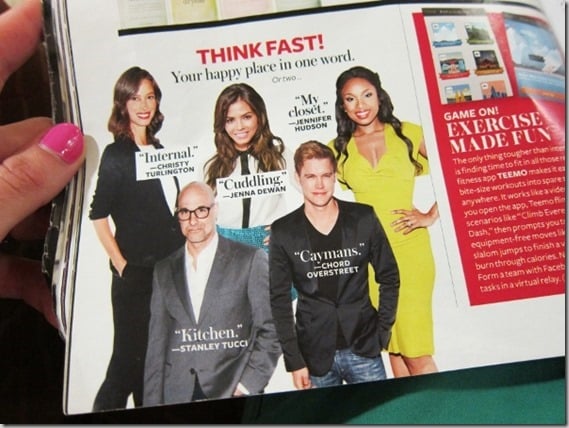 Hi, friends! Happy Tuesday! Let’s get right to it!

Yesterday started with a glass of freshly pressed juice. Oh, how I love green juice! In the mix: spinach, kale, carrots, apple, cucumber, celery, ginger, and watermelon. (Here are the approximate measurements, minus the lemon + watermelon.) Then, I whipped up a French Toast Breakfast Scramble, which I ate with some pineapple. It was a wonderfully delicious and nutritious breakfast! I spent the morning working and blogging (the morning flew by!), and then I broke for lunch around noon.

On the menu for lunch: zucchini and summer squash ribbons (I used a potato peeler to make them) tossed with olive oil, fresh basil, salt, and pepper. Then, I added some sliced chicken sausage for some protein. Delish! I still wanted something more to eat, so I sliced up a banana and added a big scoop of peanut butter. After lunch, I headed into the city for a doctor’s appointment. Things have taken a turn for the worse since I started the (super-expensive-my-credit-card-is-smoking) Uceris, so Mal offered to go to my appointment with me. Obviously, I could have gone by myself, but it was really nice to have him there with me for support. It also took some of the seriousness out of the appointment, especially when we starting cracking poop jokes. (We’re 5 years old. It’s fine.) While waiting for my appointment, I picked up an issue of In Style to read. Inside, I stumbled upon a short piece that asked celebrities to “think fast” and name their “happy place” in one word. I loved reading what each of them said and started to think about my one word. I came up with a bunch: home, pugs, cupcakes, CrossFit, summer. So my appointment went okay. I met with my doctor’s nurse practitioner (NP), who is amazing. I’ve blogged about her in the past””she’s such a wonderful person””so I was glad to meet with her again, especially on such short notice. I called my doctor’s office last Friday, panicked and upset, so they squeezed me in yesterday. MGH = best hospital ever.

I’ll spare you guys the unpleasant details of what’s happening, but I’ll sum up by saying things got worse on the Uceris, so we’re trying one more combination of drugs for the next two weeks. If they don’t work, it’s onto the immunosuppressers, which scare the crap out of me. I know they help tons of people with IBD, but all I see is the scary, awful side effects. The NP assured me the side effects happen in a small percentage of those using these drugs, but they still worry me a lot. Of course, if I can’t manage the disease using the drugs I’m currently trying, I’ll have to take an immunosuppresser. (My doctor is considering 6-MP and Imuran.) I’ve also been on Prednisone (steroids) for almost a year (minus a few weeks here and there), which has even worse side effects, so I need to get off them ASAP and an immunosuppresser will help with that. Obviously, I’m not psyched about going up to the next level of drugs, but, at the same time, I’m ready to feel well because this flare has been going on for too long. Hopefully, I will have good news to report in two weeks!

After my appointment, Mal and I were starving, so he suggested Anna’s Taqueria for dinner. He’s also a tad obsessed with it, so I had a feeling we’d end up there no matter what since it’s right across the street from MGH. I ordered a chicken quesadilla with veggies and guacamole, and it was fabulous””even better than I remembered! When we got home, I had a small serving of Ben & Jerry’s Chocolate Chip Cookie Dough ice cream, and Mal ate the rest. He literally ate 3/4 of the pint in one sitting. I actually think he was kind of proud of himself. Last weekend, I struggled though a 10K race. I have to admit, I wasn’t properly trained for it, but the hot, humid weather didn’t help either. I managed to make it through the first few miles without much trouble, but the final couple of miles really tested me. I knew if I wanted to finish the race, I needed to get my head in the game and mentally toughen up, so I used some motivational mantras to help pump me up. Here are a few that helped get me to the finish line!

Motivational Mantras To Get You Through Your Toughest Workouts

Think fast! Name your “happy place” in one word!