Mal and I arrived in Newport late on Friday afternoon and his parents arrived a little while later. We had a low-key evening at home in the condo””ate dinner, played at least an hour of Candy Crush (Mal and my mother-in-law got me hooked), and then went to bed early. On Saturday morning, I woke up bright and early. Ate a little something and then headed out to run 4 miles around Newport. After my run, I showered up and then joined the rest of the family for breakfast at the Ocean Breeze CafÃ©, which is a yearly tradition. On the way into the restaurant, I asked Mal to snap a photo of my outfit since the sweater (Kensie) and jeans (Just USA Black Label) are both from my second Stitch Fix. I ended up keeping 3 out of the 5 pieces that they sent this time. The third piece is a chunky, orange cardigan, which I would have never, ever picked for myself, but it’s really fun. I’ll post a pic on CNC soon. Here’s one of the reasons I love the Ocean Breeze CafÃ©””so many fun flavors of coffee! For breakfast, I ordered an egg white omelet with spinach, Swiss, and chorizo inside. It was epic. The homefries were also incredible””some of the best I have ever eaten. They were buttery, a little crispy on the outside, and soft on the inside. Perfect. After breakfast, we all headed out to walk around downtown Newport. We did some exploring and shopping. Mal bought a new suit coat and dress shirt from Banana Republic for a wedding we’re going to next weekend. FYI: Banana is having a ridiculous sale right now””take an extra 40% off! Then, Mal’s parents wanted to go for a bike ride, so the four of us split up for the later part of the afternoon.

Mal and I walked around Newport a little more and then popped into Midtown Oyster for some drinks and apps. We snagged some seats outside and enjoyed the beautiful fall weather. To share, we ordered the Pork Belly Cracklings and Grilled Vegetable Hummus Plate. The hummus plate was great. It was served with a variety of marinated and grilled veggies, olives, flatbread, and fresh, delicious hummus. The Pork Belly Cracklings were awful. I’m stilling having a WTF moment thinking about them. They were basically hard slabs of thick-cut bacon with a dry spice rub on them. Honestly, I thought they were one of the most disgusting things I have ever eaten. Mal thought they were gross, but edible, so he ate them. I dunno how. He is a big fan of bacon, so I guess he could tolerate them. 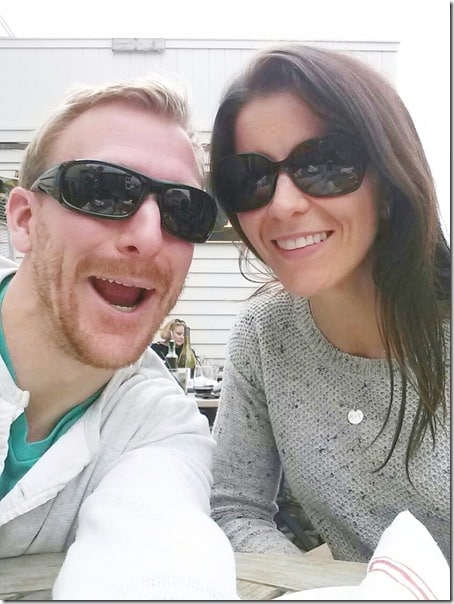 We spent the rest of the afternoon wandering around Newport and then relaxing at the condo. (I might have played a few more games of Candy Crush. I’m not sure if I love or hate Mal and my mother-in-law for introducing me to it.)

For dinner, the four of us headed to The Port Grill & Rawbar, which was a really cool place. I loved the vibe””laid-back, fun, and vacation-y. It reminded me of a restaurant in a tropical, touristy location. I ordered the Tropical Salad with chicken on top. It had pineapple, mandarin oranges, golden raisins, and shredded coconut in it””fun mix of ingredients! For dessert, the four of us shared a piece of key lime pie. Delish! After dinner, we all headed home and went to bed. It was a fun day!

Are you playing Candy Crush? Are you obsessed?

When dining out, do you send back bad food or just eat it?