We (Sort Of) Celebrated 7 Years of Marriage

So, Mal and I sort of celebrated 7 years of marriage yesterday. We didn’t have big plans because we just got back from Oregon and we have another vacation coming up in August, so we decided to keep things low-key this year. We did, however, agree to buy each other “traditional” wedding gifts just for the fun of it. Seven years is copper, so we planned to get each other something made from it. It was a last-minute decision, so neither of our presents arrived in time for our anniversary yesterday. We didn’t have anything to open, but we had a good laugh about our “copper” gifts for each other. Funny story…

Mal somehow mixed up copper and tin (he still has no idea how), so my gift from him is actually made of tin, not copper. When he realized the mix up, he wanted to get me something made of copper, but I told him I’m sure I’ll love whatever he got for me and not to bother with another gift. But, of course, I had to razz him a little by buying him a tin of Altoids. Haha! Our past anniversary celebrations:

The rest of our anniversary celebration was laid-back and relaxing, which was especially nice after such a busy few weeks. I’m telling ya, summer in New England is crazzzyyyyy! We planned to spend the day with Papi, so we drove out to Funny Farm, which included a stop for anniversary donuts. We also stopped for iced coffees at Gourmet Donuts, which has 65+ flavors. Oh, yes. I went with Macaroon. The temps were in the 90s yesterday, so we hopped in the pool as soon as we arrived. It was glorious. Even Murphy went for a dip in the pool. Related: Murphy enthusiastically “elephant butted” around Funny Farm like his old crazy pug self, which made me so happy to see. I’m glad he’s feeling better! After spending some time in the pool, we ate lunch with Papi… and Murphy. Hooray for a fun day at Funny Farm! (FYI: Quinn’s fedora is from Gymboree.) On the way home, we snacked on some caramel popcorn from Papi. He grew up in the same town as Harry & David, so he especially loves their products! We do too! Back at home, we did the usual Sunday night routine to get us ready for the upcoming week. I can’t believe it’s already Monday again!

How did you celebrate your most recent anniversary?

What is your hometown known for? 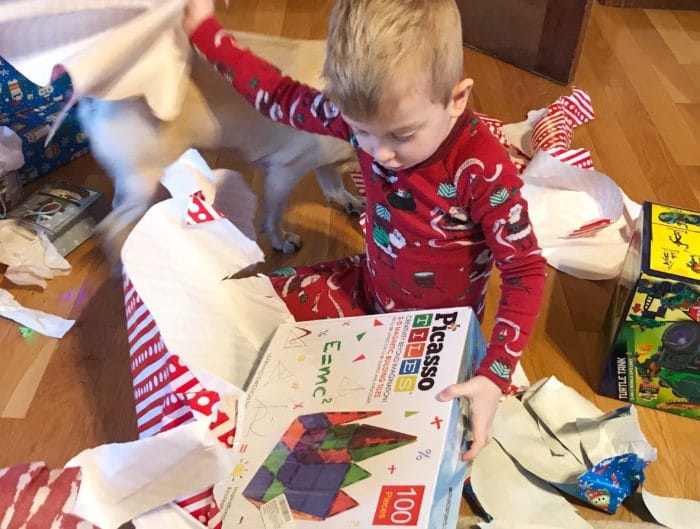 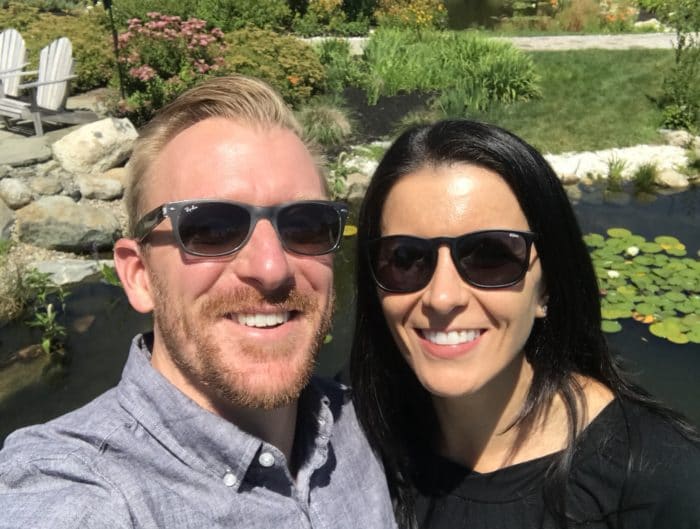 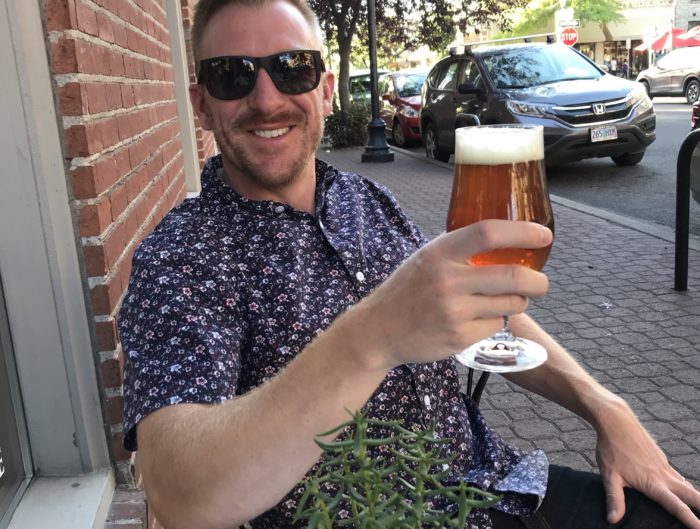 I grew up in Charlottesville, Virginia which is most known for the town where the Dave Matthews Band got their start! Related, my boyfriend and I celebrated our 4 year anniversary at a DMB concert this past weekend!

My boyfriend and I just celebrated 2 years dating….. I think maybe we ordered pizza? Maybe went on a hike… hahah nothing too exciting.

I am from Martha’s Vineyard, specifically Edgartown, so… a bunch of things. Jaws, president vacations, the bridge on chappy….. all the good stuff (minus the bridge) hahah

I haven’t had an anniversary yet but I love the more fun themes…and everything to do with Harry & David and Stonewall Kitchen. The best part of being a New Englander is getting to claim the chocolate covered berries, maple syrup, and jam as our own 🙂

OMG Quinn’s fedora is the cutest thing ever. I’ve always wanted one for myself!

My hometown – Cincinnati, OH – is known for Graeter’s Ice Cream, which is seriously so good. The chocolate “chips” in the chip flavors are not chips, they are chunks of the best chocolate. My favorite part!

I love low-key anniversaries and that’s how I always celebrate. Last year we did a ropes course at a nearby state park which was a ton of fun. Our 4th anniversary is coming up in a few weeks so I might have to plan something special!

Pittsburgh is known as a city of champions and bridges! We also have a regional dialect known as pittsburghese and we’re called yinzers!

Our anniversary was on Saturday (17 years!), we went to a local steak/pasta place and had the BEST meal ever! Then we came home and watched “This is 40” and laughed till I cried!

We did an easy celebration for our three year anniversary last month–dinner out and wine on our patio! It was lovely! Congrats on 7 years!

Our anniversary is actually on the 17th and I will be in LA for Blogfest. Whoops! My birthday is also on the 20th, so maybe we will just combine the two. Sometimes it’s the low key things that are the most fun 🙂

I love dong the traditional gifts. This year was leather, which was a good one! I can’t wait until 100 years because that is a 10 carat diamond! Haha. No one has ever made it that long.

I love the fedora – It’s adorable and much needed for all of that sun 🙂 We have never done the “traditional” anniversary gifts but my husband would totally give me a roll of pennies if we were on the copper year LOL!

I am from and live in Green Bay.. so Packers! 🙂

Saturday was 4 years with my boyfriend. We participated in free slurpees from 7-11 then had a nice, quiet dinner at home.

My hometown (county) is known for the Space program. Kennedy Space Center!

Sounds like a great day- happy anniversary! We celebrated three years a few weeks ago and went to a new restaurant to celebrate. My home town is Minneapolis and we are known for our lakes (“City of Lakes”). We were also recently recognized as the only U.S. city to rank among the worlds top cities for cycling! Great place to bike around lakes:)

My hometown is famous for beef and cider, can’t go wrong there 😉

Congrats! We celebrate by going to the same restaurant where we had our first date! It never gets old.

Hubby and I are celebrating our 4th anniversary this upcoming weekend with a spontaneous trip to Vegas. We couldn’t find any place to stay in Bend, OR for the weekend, and tickets to Vegas were cheap, so it just kind of happened!

My hometown of Hillsboro, Oregon isn’t known for much, but the surrounding area is home to a TON of wineries. Any time someone comes to visit, wine is involved.

I think the traditional gifts are cool. Even if certain years are bound to be tricky!

Congratulations on 7 years of marriage!! That is awesome. Haven’t had our 1st wedding anniversary yet though we’ve been together 5 years. We will celebrate our first next June. I can’t wait!

Happy Anniversary!
The hubs and I just celebrated our 13th year anniversary. We had an early dinner out at a new Italian restaurant. Low key rules…then expectations don’t get squashed.
Syracuse,NY known for Syracuse Basketball, Hoffman hot dogs and salt potatoes

That donut!!! Mmmmm! Those Harry & David popcorn mixes are dangerously yummy too.

Happy Anniversary to you guys!! Glad you had a nice weekend celebrating.

Happy Belated Anniversary! We are celebrating our two year wedding anniversary on the 25th. This year it is cotton so I bought him a applique tree framed in a wooden loop. It comes with two leaves on it (one for each year we’ve been married) and each year after you iron on a leaf…found it on Etsy! I’m going to put it in a gift bag filled with cotton balls. (instead of tissue paper) Not sure where we will go to eat though…

What a fun day! We are pretty low key as well on our anniversary. However last year we went to Chicago for a few days which was a blast! My hometown is known for the Ohio Women’s Reformatory, Honda, and Scotts!

Congrats on 7 years! My husband and I just got married on the 4th of July so I think our upcoming anniversaries will be hard to forget! We love traveling so many we will do a fun trip within the U.S. every 4th 🙂 Looks like you guys had a great celebration. Cheers to many more years to come.
Devon

Hi Tina! My husband and I celebrated three years in May, and we were actually in Florida visiting family on our actual anniversary, so we didn’t do much but have dinner with them. Because we were married on Memorial Day, we’ve been to several weddings right around our anniversary. It’s a popular time to get hitched! 🙂

This year my 14th(!) wedding anniversary fell on memorial day. I think we grilled something for dinner, I don’t recall. Nothing special… most of the day was spent doing chores around the house and then that evening we decided to buy a ZeroRunner for our exercise room to have an indoor option for running throughout the summer. We’ve never been good at celebrating anniversaries… one year we went out to dinner and then stopped at the store to buy TP after.

I don’t know what to consider my hometown… but if I consider it where I live now (Vegas) it’s known for debauchery. 🙂

Our anniversary was Sunday too!
We spent the weekend kayaking in and biking around Lake Champlain in the islands!
I’m from Montpelier, VT so, being the state Capitol and the only place in VT (other than Burlington) most people have heard of!
Macaroon ice coffee sounds amazing!

just celebrated 25 yrs, went out for a fancy dinner, would have gone away but i just got back from costa rica with the kids, and my b day is today,

I sincerely congratulate you!!

Happy Anniversary! That lunch from Papi looks and sounds so delicious yet simple! Was it just chicken, avocado, asparagus and tomatoes? Yum! Love eating like that in the summertime 🙂

[…] gifts arrived””and we bought the same thing for each other! Great minds think alike! Although, my gift for Mal was made from copper and his was made from tin. […]

[…] gifts arrived—and we bought the same thing for each other! Great minds think alike! Although, my gift for Mal was made from copper and his was made from tin. […]