Things You Should Know {Some Important, Some Not} 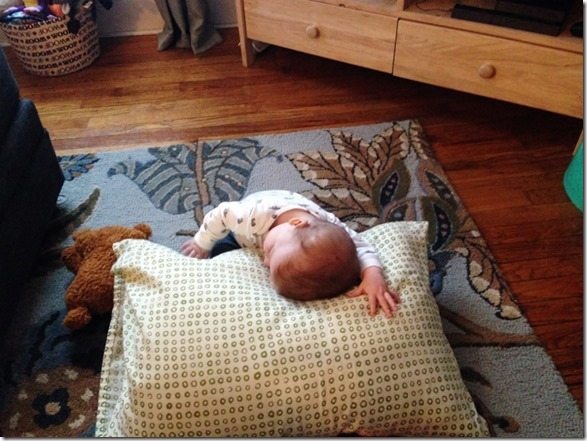 We had a pretty low-key weekend over here, which was wonderful and much-needed, so I don’t have too much to report, but I have a some important and not-so-important things I want you to know, so here goes!

Tickets for the BLEND Retreat are now on sale! Say what? BLEND Retreat? Never heard of it? Well, the BLEND Retreat (“blogger” + “friend”) is a retreat for healthy living, food, and fitness bloggers from across the world. Instead of focusing on seminars and speakers, the focus is on friendship and having a weekend away to get to know one another in real life. More info here!

I am teaching Quinn how to “pretend he’s sleeping.” (He did this for a good 15 minutes the other day: He would lean over and rest his head on the pillow and then sit up and laugh hysterically. It was ridiculously cute.) When my sister and I were kids, we would pretend we were sleeping when my mom came home from work. I have no idea why we did this, but we thought it was so funny and we did it for years. I remember doing it in high school and even after just because my sister and I (and my mom) got such a kick out of it! Weirdos. Haha!

Ben & Jerry’s recently introduced COOKIE CORES. Yes, ice cream with a cookie center all the way to the bottom. Holy cow. The brand sent me their newest flavors to try and OMGGGGGGGG… YOU MUST TRY THEM!! Speaking of ice cream”¦ I’m keeping these 3 things in mind as I train for marathon #3 so that I don’t pack on the pounds!

And with the first week of the Fit for Life Challenge, I’ve learned three important things regarding my diet: 1) I need to eat more protein. I had trouble meeting my protein goal almost every day, except for when I drank a protein shake and ate a Quest Bar in the same day, which I’m not sure is a good thing or a bad thing; 2) a 40/30/30 diet doesn’t really work for me, so I adjusted my macros to 50/30/20-ish (I need more CARBS with all of the running that I am doing); and 3) I need at least one treat per day to keep me happy, so I pay attention to my portions. For instance, I tried all three Cookie Cores (the Spectacular Speculoos is my favorite), but I measured and ate one serving of each (on three different days) instead of just eating from the carton like I normally would.

62% of kids ages 6 to 12, survey by Highlights magazine, said their parents are sometimes distracted when they’re trying to talk to them. By what? The number one reason: Cell phones (28%). The study analyzed more than 1,500 surveys from kids, many of whom gave eye-opening quotes. One eight-year-old girl answered the question, “If your parents lost their cell phone for a day, what do you think would happen next?” with “Freak out, but I’d be happy.” Um, yikes. Reading this little tidbit in February’s issue of Real Simple was definitely a wake up call for me and using my phone around Quinn!

Babies should not suck on or play with car keys because there’s a potential risk of ingesting lead. A reader sent me an email over the weekend telling me about her son, who’s lead levels in his body were elevated at his one-year doctor’s appointment. The doctor had no idea why, so they had someone test their home, which was new construction and free from lead paint. Toys, doors, everything was tested and they still had no idea why his levels were increased. Eventually, they learned that the keys her son played with likely contained lead. He would play with them and then put his hands in his mouth and consume the lead residue. After seeing a photo of Quinn playing with a set of keys on CNC, this reader wanted to share her story since she went through a long, laborious process and didn’t wish it on another family. I am SO appreciative of her email and wanted to let other parents out there know about this potential risk as well. I am really looking forward to this week’s meal plan because I’m making BBQ shredded chicken. I’ve had a serious craving for it for weeks now, so I’m pumped to incorporate it into a bunch of meals this week! Yummmm!