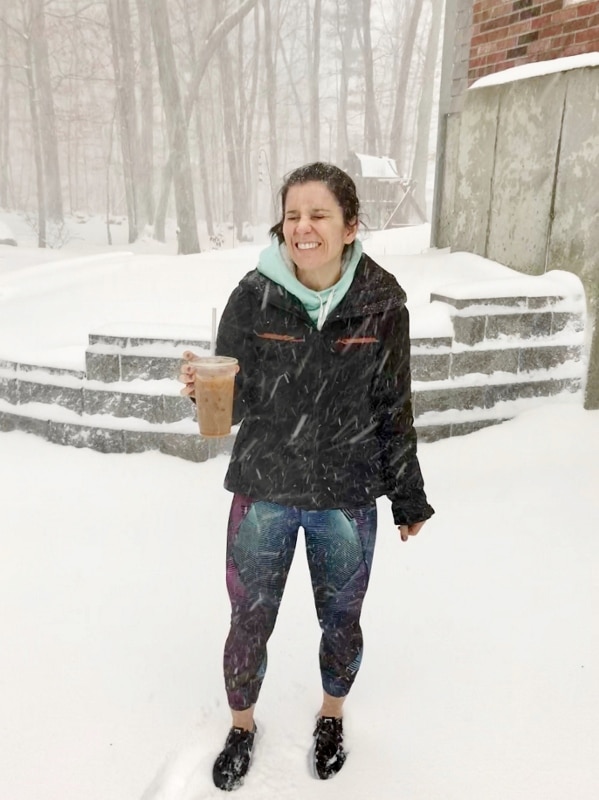 We got quite the snow storm on the South Shore yesterday. It was crazy. The snow and wind gusts came fast and furious! But I was more than happy to have a “snow day” with my family. Actually, one of Quinn’s teachers at school said we should have a “storm party” to celebrate, so we called it that instead. I mean, doesn’t “storm party” sound a lot more fun!?

When we woke up on Thursday morning, I expected to see the ground covered in snow, but there wasn’t a single flake. In fact, the snow wasn’t even expected to start until nearly 8:30 AM, so we decided to get ourselves ready for the gym. Mal and I figured we’d be snowed in for the rest of the day, so might as well get out while we could!

Before we left the house, we ate breakfast. For me, it was rice cakes with peanut butter and banana. For Quinn, it was apple slices eaten via tongs, which he lovvveeed. Hey, whatever works, right? 🙂 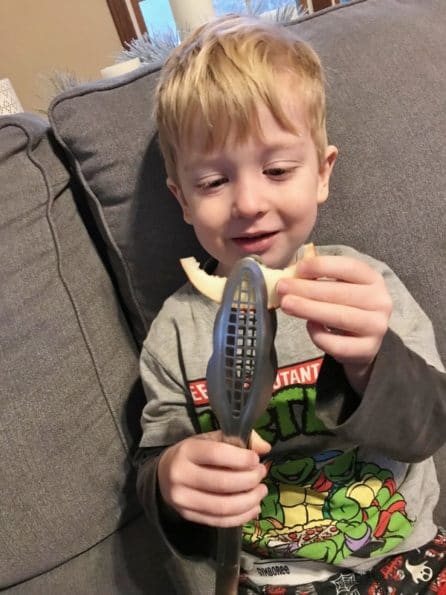 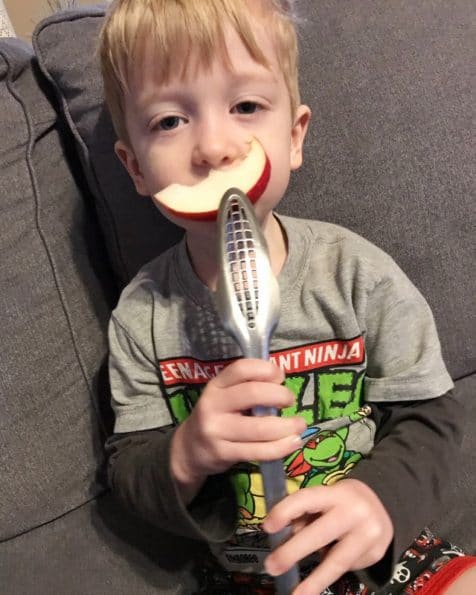 Fun gym workout! I’m feeling a whole lot better since my injury, but I still scaled the Box Jumps to Step-Ups. I just wasn’t feeling the jumping, but everything else felt fine! 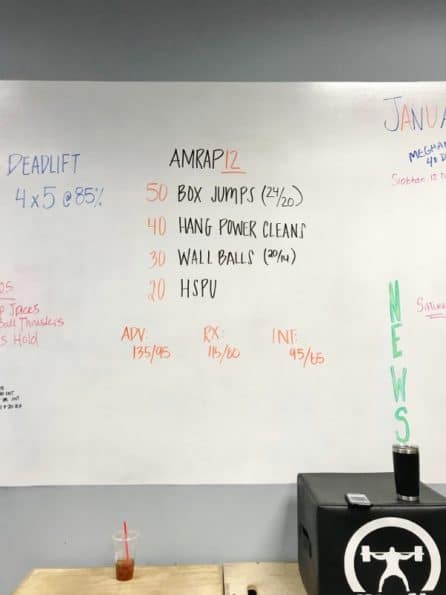 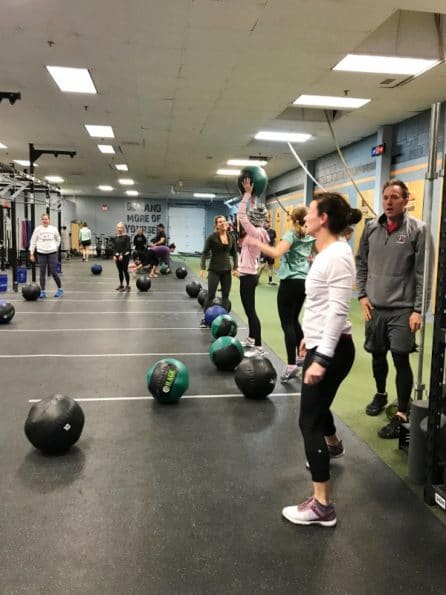 Seriously, the gym was JAMMING. I don’t think I’ve ever seen it that crowded. I guess everyone else had the same thought as us!

After CrossFit, we swung by Coffee Shake for iced coffees and a donut to share. 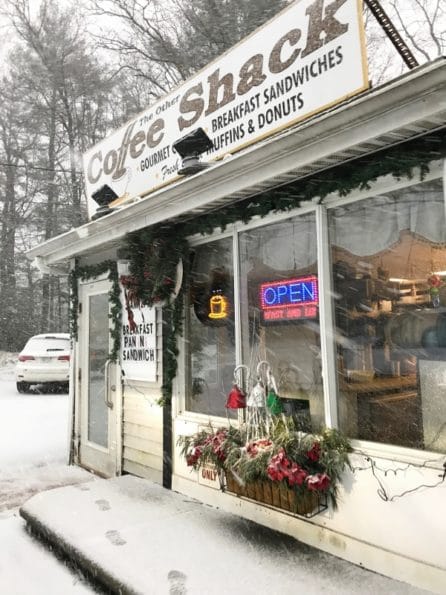 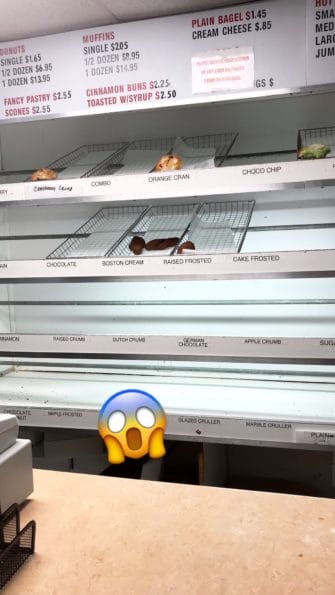 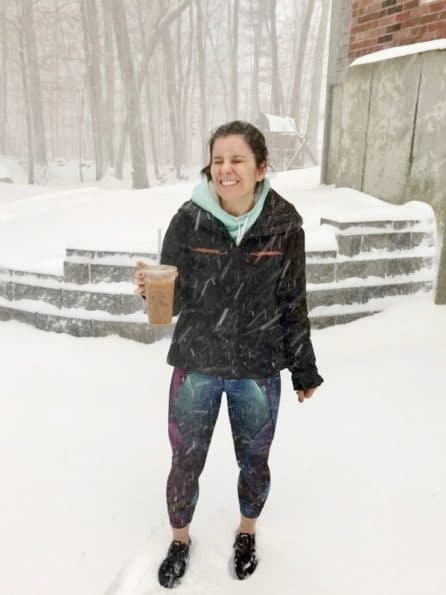 Back at home, we settled in. We had no plans to leave the house again. We played lots of games and even broke out Quinn’s old eagle costume for a little bit! 🙂 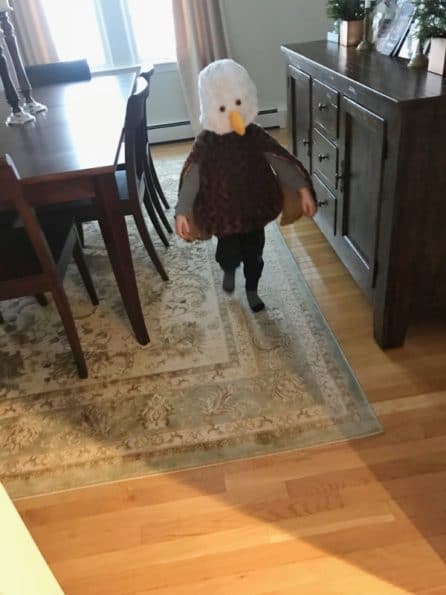 Trader Joe’s Vegetarian Chili was on the menu for lunch. For the canned stuff, it was really good! 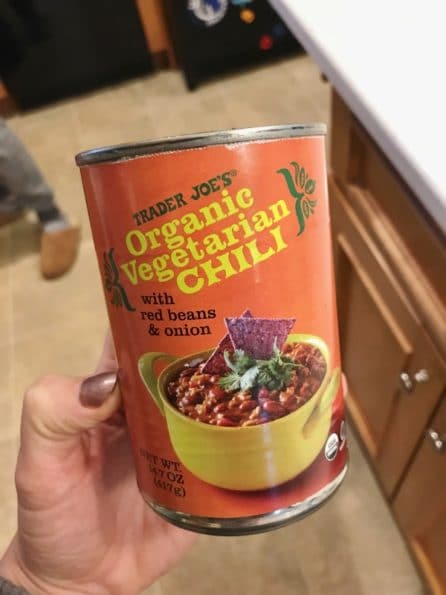 I added some shredded cheddar to my chili and then paired it with some leftover sauteed greens. 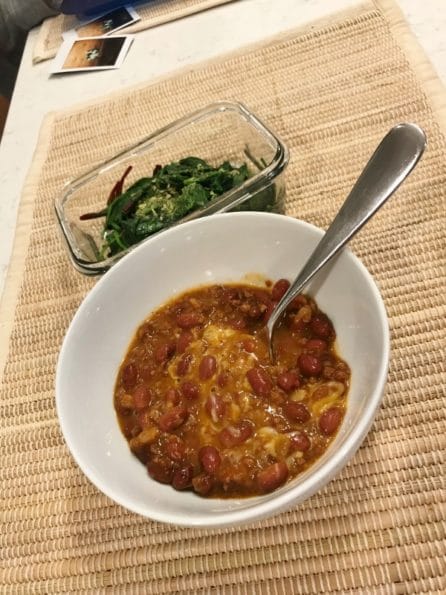 After lunch, it was time for Quinn’s nap, so I headed upstairs and immediately got to work. I took the morning off, so I definitely needed to get some things done. I snacked on a Kashi Dark Mocha Almond Chewy Granola Bar and some sparkling pineapple water while I worked. 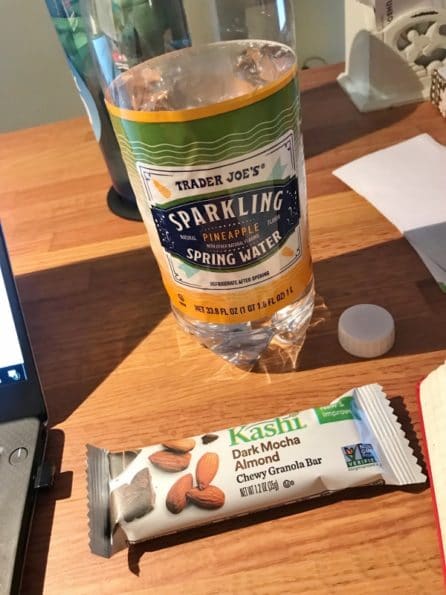 I worked for about 2 hours before a tiny human crept into my office. The door opened, and I saw a small face looking at me. Too cute! After that, I finished up a few items and then called it quits for the day. It’s so hard for me to get work done when my family is home.

After that, I was hungry again. I swear being snowed in makes you eat more! I finished off some BBQ chicken leftovers from the night before. 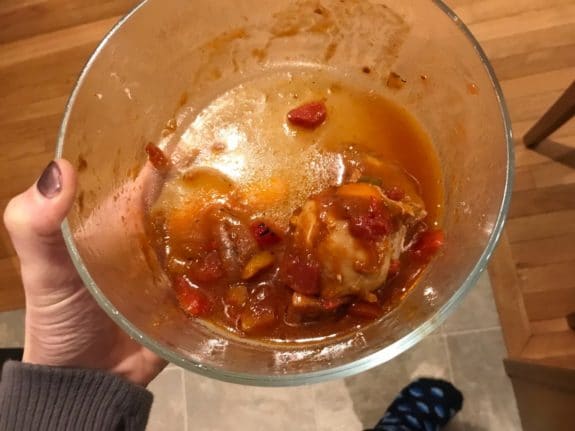 Then, it was time go outside and play in the snow! I got Qman all dressed in his Cubbies shirt, snowpants, and boots. 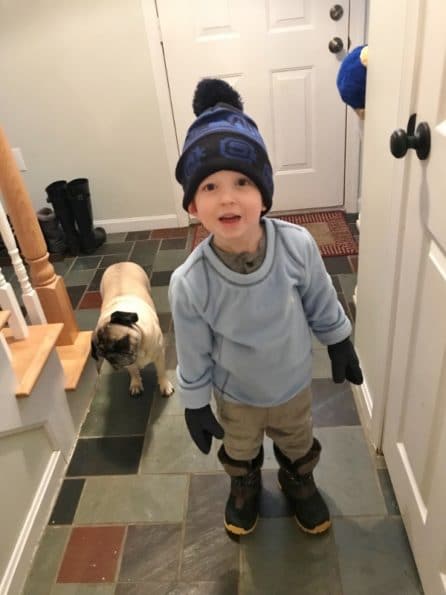 I finished off the outfit with a snow coat, gloves, and hat. All geared up! 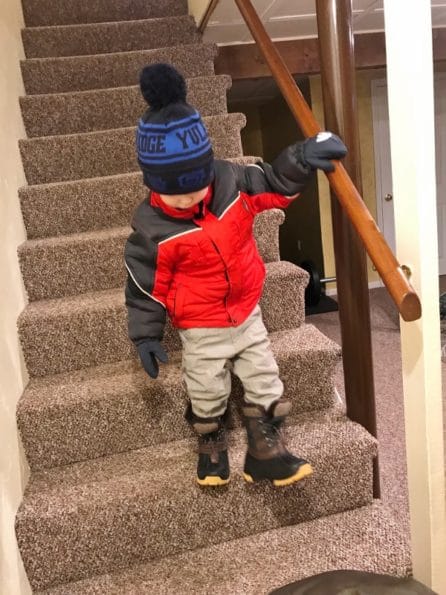 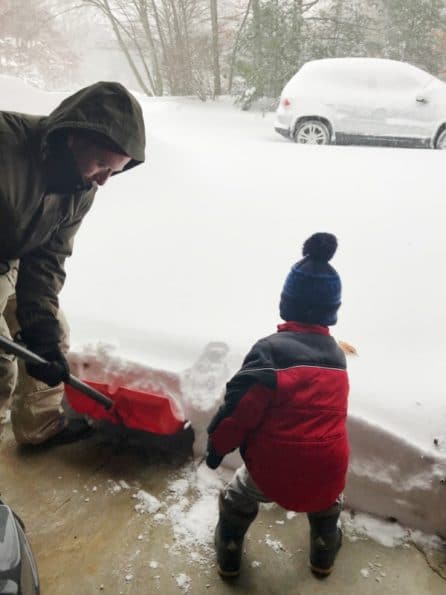 Quinn played outside for maybe 5 minutes before he wanted to come back inside. I don’t blame him – it was so windy outside! When he got inside, he wanted hot cocoa without the hot cocoa! 🙂 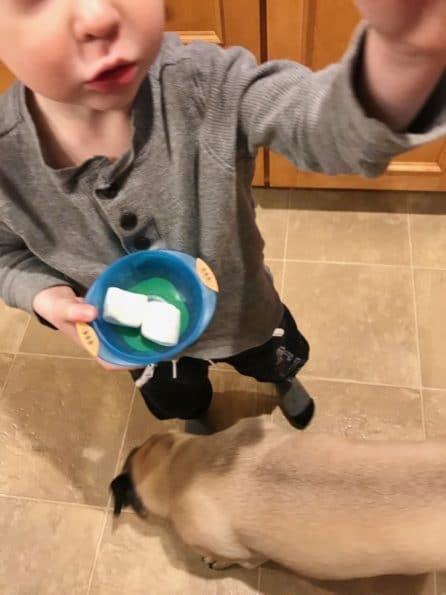 Pizza was on the menu for dinner! 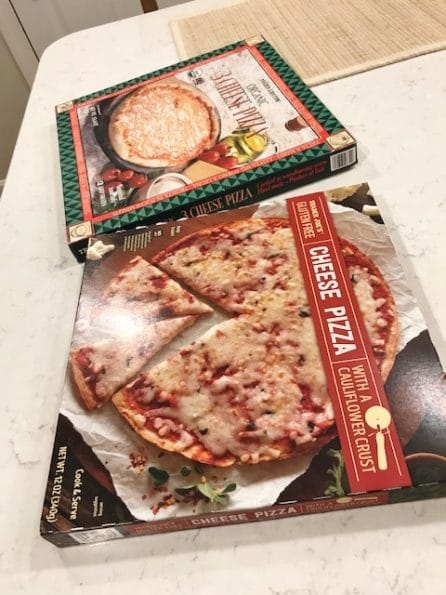 Quinn was all about pizza until we were about to sit down to eat and then asked for a peanut butter and jelly sandwich. Typical 3 year old move, but he ate almost the whole thing! 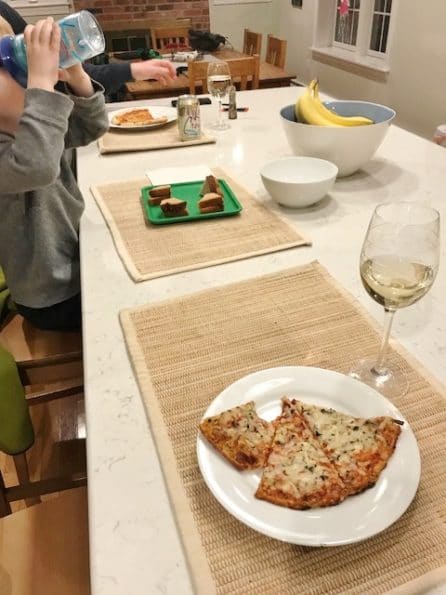 I finished off the night with UNREAL candy. 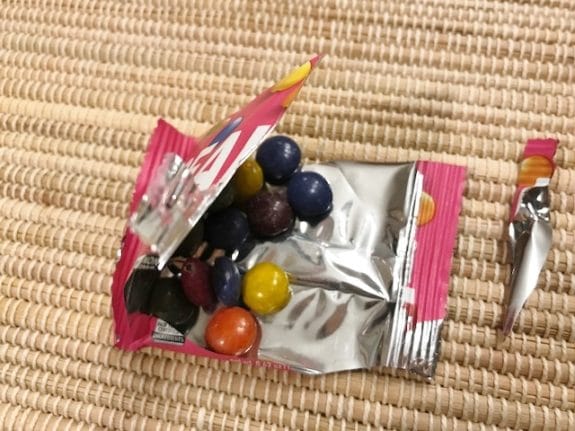 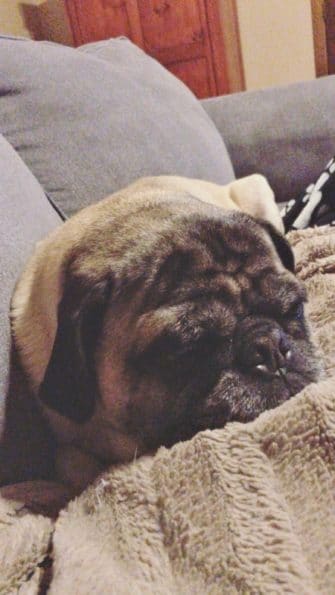 Did you have a snow day yesterday? How was it?

Do you tend to eat more (junk) on snow days?