Photos I Send to People 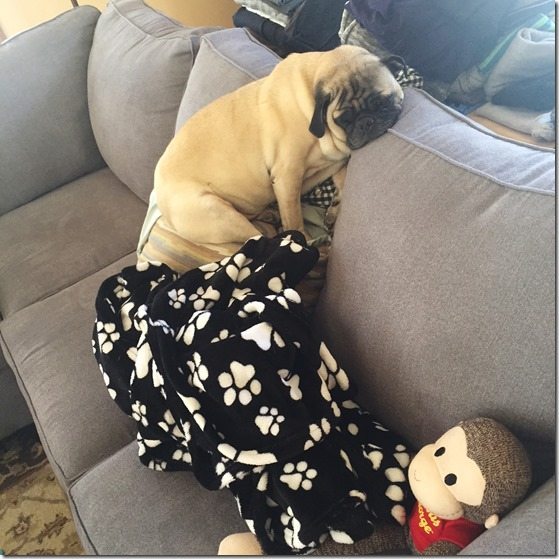 I thought “Photos That I Send to People” would make a fun blog post on CNC since it’ll give you a little insight into our life and hopefully make you laugh. I’d say 90% of the photos that I send to my family and friends are intended to make them smile. That said, here are some photos that I’ve recently sent to people. Enjoy! To: Mal
What: A photo of Quinn sleeping on me.
Why: It was just a couple of days after his surgery, so he was tired, cuddly, and so adorable. He also just wanted “Muma” day and night. Toddler snuggles = the best. To: My father-in-law and sister-in-law
What: A photo of Quinn eating a block of Gruyere cheese like an apple.
Why: Mal’s family is French, so I thought they’d get a kick out seeing their little Frenchman chow-down on Gruyere! To: Marisa
What: A photo of our snacks when we stayed overnight in the hospital after Quinn’s surgery.
Why: She asked if we were enjoying a nice hospital dinner and, at the time, we were drinking iced coffees and eating cashews and Justin’s Peanut Butter Cups. To: Mal
What: A black and white photo of a peacock.
Why: I was at Homegoods, debating whether to buy it for my office or not. I’m obsessed with having a bird piece on the back wall and wanted Mal’s opinion. As you probably remember, Q-Man is super into birds, so I love the idea of seeing something that reminds me of him every time I walk into my office. Mal’s family also owned a peacock when he was a kid, so I seriously considered buying it. I ultimately decided the peacock looked too angry, so I didn’t get it. To: Monica
What: Ok, not technically a photo, but a screenshot from my iPhone of the current temperature.
Why: Monica lives in sunny California, so the weather in Massachusetts both scares and amuses her. Remember when she ran 20 miles with me last Spring? She still wins the “Great Friend Award” for that. To: Marisa
What: A workout that I did at KFIT.
Why: I did 121 Burpees the day before (Open WOD 12.1 aka 7 minutes of Burpees), so I wanted to show her how many more Burpees I just did. I was sore for daysssss. To: My sister
What: A photo of our Grammie and her great-grandchildren.
Why: Mal snapped this photo on my phone, so I wanted to make sure she had a copy of it. To: Mal
What: A photo of my slipper with my foot/sock sticking out.
Why: I bought new pair of slippers maybe a month ago and they ripped already, so I wanted to show him what a piece of crap they were! To: My sister
What: A photo of a Little Tikes Little Champs Sports Center.
Why: My sister gave this toy to Quinn when Matthew outgrew it, and now Quinn’s too old for it and never plays with it, so I sent her a pic and asked if she wanted it back for my niece. To: Mal
What: A photo of Murphy squashing a pillow with his big pug butt on the couch.
Why: It was a highly illegal situation involving the pug, but so cute at the same time. I just had to snap a photo to show him. To: My mom
What: A photo of Quinn with a bird sticker on his face.
Why: My mom sent Quinn some bird stickers for Valentine’s Day, so I sent her a photo to show her how much he liked them. Caw-caw! To: Mal
What: A screenshot of an “On This Day” memory from my Facebook account.
Why: I wanted to remind him that Murphy was once well-behaved around food. To: Mal:
What: A photo of Quinn watching trains on TV.
Why: Quinn and I had just returned home after running some errands. I turned on the TV, and he stopped in his tracks to watch. And then he stayed there for a good 5 minutes in complete awe, so I snapped a photo to send to Mal. I had never seen him so into TV or trains before! To: My sister
What: A photo of a bottle of wine that she gave us for Christmas.
Why: I wanted to show her that we tried and liked it! Related (for the local readers): My sister is a wine guide and does really fun (free!) tastings. Check out her Facebook page and feel free to contact her if you’re interested in setting up one! To: My mom
What: A photo of Quinn with balloons stuck to his head via static.
Why: We used to do this all the time as kids, so I knew my mom would get a kick out of seeing Q-Man! To: Mal
What: A photo of a “mega garage” that I built with Quinn’s Mega Bloks.
Why: Mal and I always try to one-up each other with our block creations, so I had to send him a pic of my recent one. Haha! To: Mal
What: A photo of Quinn eating a pancake.
Why: It was his 6th (!!) mini pancake, so I just had to show Mal. It’s crazy how much Q-Man is eating nowadays. It’s like he’s making up for lost time! To: Mal
What: A photo of Brownie Bites from the Au Bon Pan at the hospital.
Why: When we were at the hospital for Quinn’s surgery, I stopped by to grab us dinner. I saw these Brownie Bites near the register while waiting in line, so I snapped a photo to send to Mal (because we’re 5 years old and thought he would think it was funny). Backstory: When we’re walking Murphy and he stops to sniff other dog’s poop, we always tell him to not eat the “brownie bites.” I told ya, we’re kids.

Your turn! Tell me about a photo that you recently sent to someone!

PrevPreviousWeekend: Time for Adventures Or Catching Up?
NextA New Way to Discover Beauty Products (When You Have a Toddler)Next