Weekend: Time for Adventures Or Catching Up? 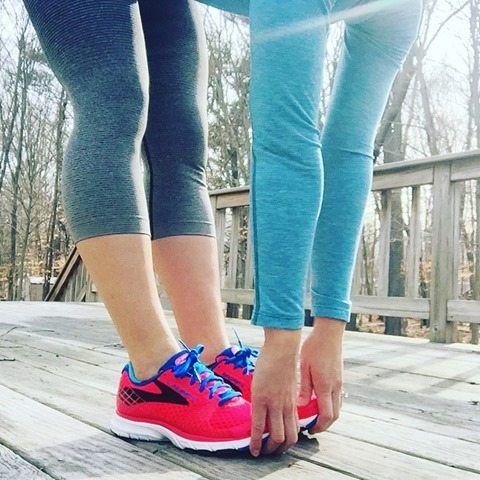 Hey, friends! Happy MONDAY to you!

How was your weekend? Ours was fairly uneventful, but I’m totally okay with that. Back in the day, I would have been bummed that I didn’t have exciting weekend plans, but now I enjoy the opportunity to relax, unwind, and catch up with life. That said, here are some photos and random tangents from our weekend!

While making breakfast on Saturday morning, I heard “uh oh” over and over again coming from the living room. Quinn is a huge fan of “uh oh” and uses it all the time… when he drops something, when his pant leg is stuck up, when he sees the Harpy Eagle on Paw Patrol… so I wasn’t surprised to hear him say it. He didn’t sound distressed, but he kept saying it over and over again, so I looked around the corner to see what was up. Apparently, Murphy was (illegally) sitting on the couch, and Q-Man was tattling on him! Haha! I just had to snap a photo of these two. Poor Murphy. Speaking of dogs, Quinn met Cassie at CrossFit on Saturday morning and gave her a bunch of open-mouth kisses. It was so cute and so gross at the same time! We did a workout called “CrossFit for Hope.” I got 217 reps, but I only did Chest-to-Bar Pull-Ups for 2 of the 3 rounds, which was by far the most I’ve ever done in a workout, so I was happy even if I couldn’t keep them up for the entire workout. For some reason, I’m on the fence about signing up for the CrossFit Open this year. Last year, my performance was such a joke with marathon training and not being in CrossFit shape. I was pregnant the year before, and I actually think I did better in that Open! Ha! I know it’ll be fun, so maybe I’ll sign up. We’ll see. After CrossFit, our little family got iced coffees and donuts from the Coffee Shack, which is our new Saturday morning tradition. Lunch was a big salad with roasted red pepper hummus as dressing. It was deeelicious! That afternoon, Quinn and I ran some errands together. Our first stop was Target where he discovered some Silly Putty-like thing that kept him entertained for the entire trip. It was really cool. Dollar Spot for the win! After Target, we swung by Trader Joe’s for some groceries. While there, Quinn tried a fish nugget and loved it. I know, right? I was so surprised he ate it. Quinn’s eating has actually improved so much in the past few days. He’s actually eating FOOD, and I haven’t made him a smoothie in days. He hasn’t asked for one! It’s pretty amazing how much the surgery has improved his appetite.

Other changes we’ve noticed since the surgery: No boogers and he’s so much happier! Before the surgery, we’d wipe boogers from Quinn’s nose probably about 20 times a day. He constantly had a runny nose, but now… nothing. Not a single snot. His mood is also so much better. He still has his random toddler tantrums, but he’s laughing and smiling so much more nowadays. We haven’t noticed a ton of improvement on the talking front yet, but we think it’s coming. He’s babbling a lot more and repeats words more often now, so we think he’s moving in the right direction.

After running errands, we returned home and took Murphy for a walk. It was such a beautiful day!! (WHAT a difference from last winter!) That night, we broke out Quinn’s new bath crayons and played in the tub for quite a while. He loved them. You should have seen his masterpiece by the end of his bath! Once Quinn was in bed, I turned on the Real Housewives, broke out a cream soda, and gave myself a much-needed facial. (I know. It was a crazy Saturday night.) First, I exfoliated with Belli Pre-Treatment Scrub (I started using this when I was pregnant and haven’t stopped – it’s awesome) and then put on the Alba Hawaiian Pore-fecting Papaya Enzyme Mask. I rinsed it off and then put on Kiehl’s Deep Pore Cleansing Masque. After that, I finished my facial with an Andalou Night Repair Cream. It was quite the nice evening. I woke up on Sunday morning to Mal and Quinn cooking cheesy eggs and chocolate croissants for breakfast. Mmm! After breakfast, I went for a 7-mile run. I didn’t feel great, and I definitely wasn’t fast, but the weather was so amazing, especially for February, I just couldn’t help but enjoy myself. After my run, I showered up and then got my meal prep on. I made a Hash Brown Breakfast Bake for the week and then made a Spaghetti Squash Lasagna, which is all the rage with the KFIT ladies right now. I just had to try it. It turned out so well, and I will definitely make this recipe again! It’s the weekend: Would you rather fill it with fun adventures or use it as time to relax and catch up with life?

Unrelated: Has anyone tried the Smoked Butterscotch Frappuccino from Starbucks? It sounds incredible!