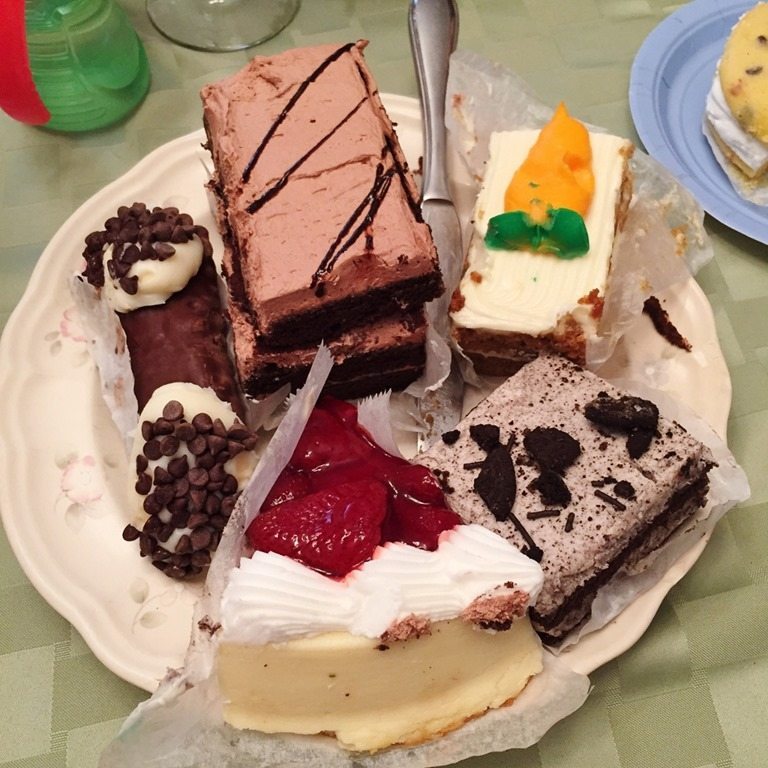 Good morning! How’s it going? I hope your day is off to a wonderful start!

It’s time for another Photo Dump, which means I’ll share all sorts of random photos from my iPhone. This week, there’s a special announcement, so be sure to read to the end!

Just running around the house with a dish towel on his head. Quinn is such a ham– just like his dad. Pumping some iron. We were at a friends’ house and Quinn immediately went over to their dumbbell set. The 2-pound weights were the only ones he could pick up! It was like a Hitchcock movie. A few of my friends joke with me about how creepy Southfield is for running. It’s on old military base (that’s slowly being revived), so I can see why they think that, but it’s also miles and miles of paved road, which is perfect for long runs. Anyway, I ran there the other day. It was a cool, cloudy, and quiet morning. I didn’t see any other runners or bikers, but I did see a crap-ton of birds in the sky. I just had to stop and snap a photo to send to my friends. It was creepy for sure! Haha! The only way to wear sunglasses. Obviously. #coolkid Blood Marys at the KFIT pool party. Oh, summer, you will be greatly missed. Someone was looking for attention. My sister gave me a bunch of my nephew’s hand-me-downs, so Quinn and I went through them together. I forget why we stopped looking at them, but when we came back, Murphy had made himself comfortable. High-five with Dada! These two are so adorable together. Mal is the best dad ever. The breakfast pizzas from Juli Bauer’s Paleo Cookbook. I sent a friend a photo of them for an idea for a future brunch together! Poor Duck. Quinn threw Murphy’s beloved toy in the toilet. (I’m telling ya, he’s quick!) I took a photo to send to Mal since Duck was our first toilet casualty. We’ve had a lot of close calls, but he was the first thing to officially go into the toilet. Related: Duck was Murphy’s first toy. <– super cute pug puppy video! Life is hard for Murphy. He went to bed before we did! My sister is having a girl!!! That’s right. She’s pregnant with baby #2. I am so happy for her, and I’m psyched to have a niece! The desserts from my sisters “gender reveal” party. They were epic. I basically tried all of them. Early-morning balloon fun! My sister gave Quinn a balloon after their party and he had a blast playing with it the next morning. At like 6:30 AM, he was shrieking with delight and running around the house with it! (It was much too early for Murphy as you can tell from him face.) You have 5 desserts sitting in front of you: Chocolate cake, strawberry cheesecake, carrot cake, Oreo cake, and a chocolate chip cannoli. Which one do you pick?