My Experience at the CrossFit Level 1 Trainer Course

Check out the news that arrived in my inbox last Friday afternoon! Next step: Talk to the owners of my CrossFit box about coaching.

Now that I’m a CrossFit Level 1 Trainer, let me tell you about the course.

They Level 1 Trainer Course was held at CrossFit Reebok ONE from 9:00 – 5:30 pm on both Saturday and Sunday with a one-hour break for lunch each day. On Saturday, I arrived at 8:30 to get checked in and settled. There were about 50 participants at the course and five incredible trainers””E.C. Synkowski, Denise Thomas, Spencer Hendel, Mel Ockerby, and Joe Masley. They were all very knowledgeable and amazing teachers. I felt lucky to have these trainers at our course. The methodology and movement lectures were divided between the two days. The trainers alternated giving the lectures, so it was nice to hear from different people. Each of the trainers did a great job of explaining their topics and they made sure to highlight key information by repeating it or writing it on the whiteboard. Basically, they made it pretty obvious what was important and what would likely appear on the test. Here’s a general outline of what we covered in the two-day course:

For the movement lectures, we alternated between listening to one of the trainers explain and demonstrate a particular movement and breaking into smaller groups to practice. I really liked this way of learning because as soon as I received the information, I had a chance to put it into practice, which helped me make sense of it more quickly and effectively.

There were 5 groups of about 15 people, so we were able to get a good amount of one-on-one time with each of the trainers as we practiced the movements. Each of the trainers had their own special way of teaching the movements along with the progressions. They also taught us how to identify common exercise faults and correct them with cues as a coach, which I found to be one of the most valuable parts of the course. By the end of the weekend, I had a chance to interact with every trainer a number of times. (The photo below is two groups.) I really loved the emphasis on functional movement and safety during the course. CrossFit gets a lot of heat for injuries, so it was nice to see this issue addressed and discussed. A huge part of CrossFit, especially for beginners, is mastering the proper mechanics of the movements. For example, a newbie CrossFitter isn’t going bust out “Fran” (Thrusters and pull-ups) on their first day, but, as a coach, you can break down the movements and scale them accordingly until consistency has been demonstrated in each of the movements. Once the mechanics have been mastered, you can pick up the intensity to perform the movements as hard, heavy, and fast as possible. Long story short, I really liked how much time was spent on teaching us proper mechanics of each of the 9 Foundational Movements. At the end of the day on Saturday, we did “Fran”, which you’ve probably heard me mention a few (hundred) times on CNC. Doing Fran prescribed is my big goal for 2013, so I was nervous about it all day.

Before the workout, we practiced Thrusters and kipping pull-ups, and I felt pretty good about them. But, as soon as I picked up the 65 pounds for the Thrusters (prescribed weight for women), I just knew it wasn’t going to happen. Ok, I probably could have finished “Fran” at that weight, but the 10-minute time limit that the trainers gave us worried me. I didn’t want to be the last person to finish (for me, being the center of attention = worst thing ever), and I had never done Fran without a band for the pull-ups, so I wasn’t sure how my arms would hold up. And, truthfully, if I was going to do “Fran” Rx, I wanted to do it at my own box. The group was broken up into three heats. Most people hung back and waited for the second two heats, but I just wanted to get it over with, so I hopped into the first. I went with #55 pounds and planned to do all of the kipping pull-ups unassisted, and things went pretty well. I did all three sets of Thrusters unbroken and without much trouble, which makes me think I could probably handle 65 pounds. The pull-ups went better than expected, but, by the final set of nine reps, I was doing singles. I finished in 7:19. Not bad. Next time, Rx for sure!

Most people were finishing “Fran” around the same time (6:00 – 8:00). There were a few people who got cut off at the 10-minute mark, but, each time, the entire group gathered together and cheered them on until the end. I love this aspect of CrossFit, and it was really neat to see how everyone came together. Before the workout, barely anyone was talking to each other, but during and after the WOD, everyone was high five-ing and chatting up a storm. It was really cool to see how CrossFit brings people together.

Before each heat, we did a slow clap to get everyone psyched up! Side note about “Fran” at the Level 1 Trainer Course: I saw a woman do a 2:58 “Fran,” which is incredible. She went in the second heat, and I actually thought she was on her set of 15 pull-ups when she FINISHED the workout. In the CrossFit world, a sub-3-minute “Fran” by a woman is like seeing a unicorn. It’s definitely something special!

So, the nutrition lecture”¦ I was actually kind of surprised by it. I expected it to be a Paleo brainwash (been there, done that), but it wasn’t at all. Instead, we were encouraged to eat “meats, vegetables, nuts and seeds, some fruit, little starch, and no sugar.” Isn’t that the Paleo diet? Well, yes, it is, but the emphasis of the lecture was eating whole foods. E.C., who gave this lecture, actually joked that potatoes, white rice, and too much fruit will kill you, but her point was to eat whole foods and do what’s best for you. Another important takeaway from the nutrition lecture: Food is fuel and at the foundation of fitness. CrossFit emphasizes weighing and measuring your food to optimize your physical performance. The Zone Diet was recommended since you eat in balanced “blocks” of proteins, carbs and fat. In theory, experimenting and finding the right ratio of these three macronutrients will provide you with optimal nutrition and performance.

I generally like the idea behind the Zone diet and try to include carbs, protein, and fat in all of my meals, but I could never do the whole block-counting and food-measuring/weighing thing. It would take so much time and drives me nuts! I just want to EAT! But, I do think it’s a great starting point for people who are trying to figure out which foods best satisfy and fuel their bodies. I also like the idea of experimenting with these radios to figure out what works best for you. For example, I use to poo-poo the idea of adding protein and fat to my meals””I thought I could live off salads and Sandwich Thins””but now I know I need these two macronutrients in my diet to truly feel satisfied, and I wouldn’t know that if I hadn’t experimented with my diet. At the end of the two-day course, we were tested on what we had learned. The exam was 55 questions (50 counted toward your score, 5 were un-scored and used for future testing). The test was pretty straightforward””although a number of the questioned required careful reading””but it wasn’t as difficult as some people made it out to be. If you read through the CrossFit Training Guide (<— free download), paid attention during the lectures, and took notes on the key concepts, you’ll do just fine. Mostly everything was covered in the course, so there weren’t any surprises on the test. I finished my test in 20 minutes, but then when back and double-checked every answer before handing it in. We received our test results 5 days later via email.

The only thing I didn’t like about the CrossFit Level 1 Trainer Course was that we didn’t spend a ton of time talking about how to actually coach. I know effective coaching is something that comes with practice, but I would have liked more of an opportunity to actually practice what I had learned during the course. Now don’t get me wrong, I loved learning all about the philosophy behind CrossFit and all of that good stuff, but the course didn’t include much hands on experience for coaching, which, of course, is essential for teaching others. Obviously, after taking this course, I’m not going to be a super star expert coach right away. My CrossFit box (and I am sure others) has a great observing/coaching program, so, hopefully, that will take what I learned to the next level. There’s also a CrossFit Coaches Prep course that’s recommend for trainers, who have coached for at least 6 months, so maybe that’s something I should look into down the road? All in all, I’m really glad that I attended the CrossFit Level 1 Trainer Course. It gave me a great foundation for coaching and what CrossFit is all about, and I am excited to share what I learned with new CrossFitters. The course also helped me master the form for a number of the Foundational Movements, which will definitely help me become a better athlete. If you’re ready to commit to a strength training program and build some muscle, StrongMadeSimple is for you! 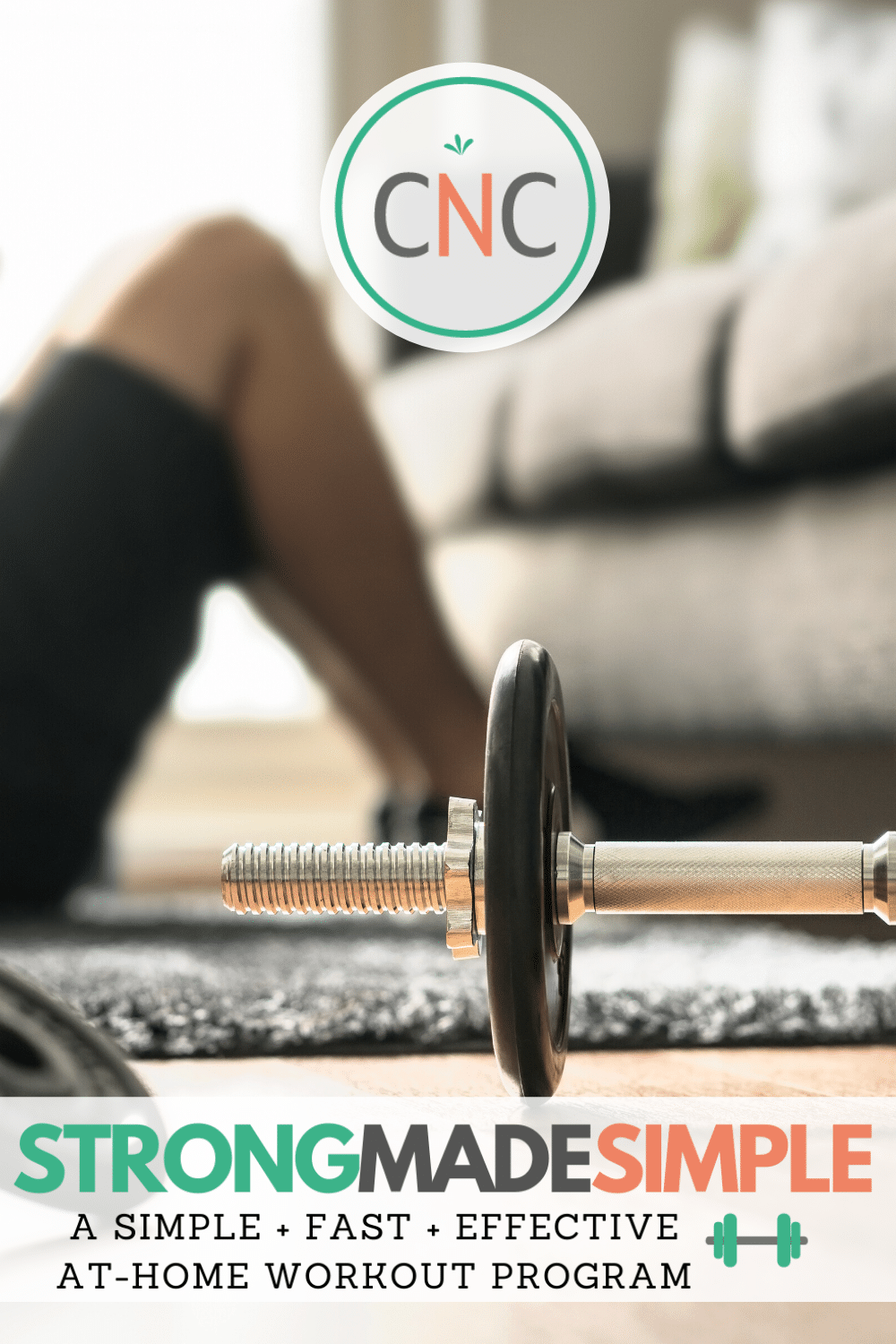 Start your macro journey now with my Getting Started with Macros Guide and 40-30-30 Weight Loss Meal Plan.

Join my Macro Bootcamp for 5 days of FREE macro education!

Have you taken the CrossFit Level 1 Trainer Course? If so, what’d you think? If not, is it something you would like to take?