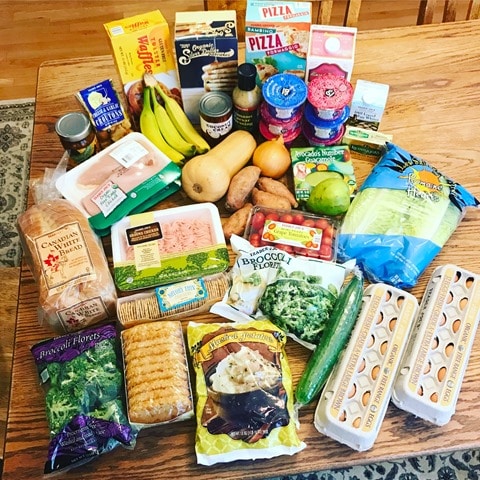 Good morning anda very happy Monday to you! Also, CONGRATS to the NEW ENGLAND PATRIOTS for winning this year’s Super Bowl! Holy cow, what an EPIC game. I don’t even like football, and I was cheering and celebrating like a lunatic last night!! 🙂

Ok, so I love a good High Low High blog post, so here’s a recap of our weekend that shares both the high and low points from it. I always like to focus on the positive side of things, so there’s typically more highs than lows. With that, here we go!

HIGH: CrossFit + donuts = favorite kind of Saturday morning. I paired up with a friend that I hadn’t seen in awhile for the partner workout, so it was fun to catch up. Afterward, Qman and I shared a chocolate-coconut donut from Coffee Shack. HIGH: Mal offering to go grocery shopping instead. Whaaaattt? He actually said he felt like going to Trader Joe’s. Well, ok then! My list was already set and ready to go– thanks to my handy-dandy Designed to Fit Nutrition printable shopping list that told me exactly what we needed to buy for the week. HIGH: Enjoying a “girl date” with my friend Marisa. We got manicures at MiniLuxe and then grabbed some wine and apps at Rustic Kitchen. Marisa and I talk just about everyday (via WhatsApp), but we haven’t seen each other since New Years, so it was really great to hang out. LOW: Mal coming down with a (man) cold. He wasn’t feeling well when I got home, so I took over toddler duties while he went to bed early. HIGH: Dominating my food prep for my Designed to Fit Nutrition meal plan this week. I finished everything early, so I relaxed on Sunday afternoon before the Super Bowl. HIGH: Drinking a beer, which is the first in years. I actually used to drink beer ALL THE TIME. I even used to have a special category on CNC because I blogged about it so much. Then, I got Ulcerative Colitis and it no longer agreed with me. Boo. I’ve actually had a craving for beer for a couple of weeks now, so I decided to give it a try. It was just as tasty as I remembered! LOW: Falling asleep on the couch and not finishing chores/tasks around the house. Whomp whomp. What a lame-o. HIGH: Pug cuddles (obviously), which were highly illegal, but Mal thought Murphy and I were cute, so he allowed it.

HIGH: Going to our friends’ Super Bowl party and eating lots and lots and LOTS of good food! How do you feel about the outcome of the Super Bowl?

What is your high and low from the weekend?

P.S. Be sure to enter my giveaway to win a DTFN meal plan! I will pick a winner later this week!