The final session of the day was called “Entertain with Ease Using New Cooking Technologies from GE.” The group learned about induction cooking and watched a couple of cooking demonstration using this new technology, which works via a magnetic field to provide fast, efficient cooking.

Upon entering the session, we received a glass of champagne with fresh raspberries. (I’ve drinking quite a lot of champagne lately!) During the session, we watch the induction technology in action as two top chefs demonstrated delicious recipes for springtime entertaining. And we got to taste their recipes! 😀 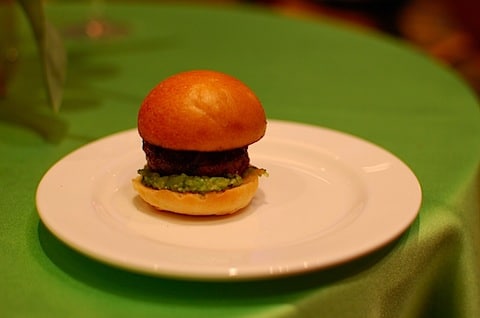 The lamb was so flavorful and moist. For some reason, sliders always seem to taste better than regular burgers to me. Both the Surf and Turf and Potato Au Gratin recipes are from the Bull and Bear Steakhouse at the Waldorf Astoria Orlando. At this point in the day, I was pretty stuffed from eating all day long, but then dessert changed my mind: Butterscotch Pudding! Heaven!!! I don’t typically like bourbon, but I practically licked the glass clean.

Almost caught up! Recap of dinner coming next!