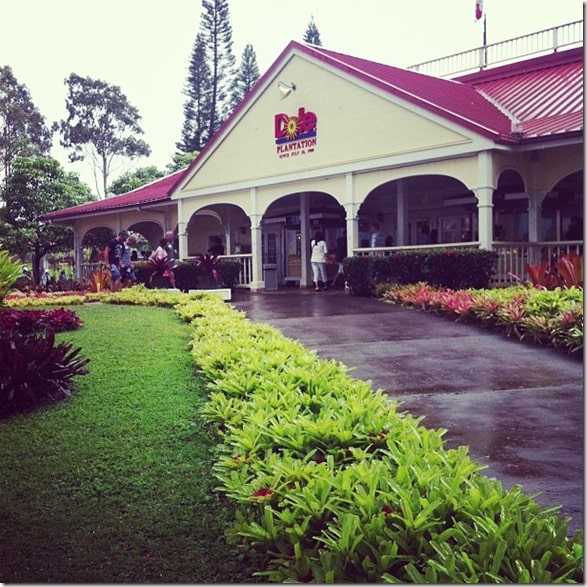 Mal and I got moving bright and early yesterday morning. We ate breakfast and then packed up our things for a road trip to the North Shore of Oahu. Right before we left our hotel room, we saw a beautiful rainbow from our balcony. It was a nice way to start the day! I love Oahu. About 30-40 minutes into our drive, we came across the Dole Plantation. We didn’t originally have plans to stop there, but since we drove right by, we decided to stop in. Pineapple? Bananas? Sign me up! Plus, I wanted to see the pineapple plantation that the folks at the Dole Healthy Lifestyle Blogger Summit talked about. Our first adventure at the Dole Plantation was going through the huge Pineapple Garden Maze””it’s actually the world’s largest maze! It stretches over 3 acres and includes 2.5 miles of paths created from 14,000 Hawaiian plants. It was cool! The “game” for the maze is to find 8 secret stations as fast as you can. When you find each station, you trace a stencil onto your card to show that you reached it. Mal and I only found a couple of stations before it started raining, but it was still fun wandering through the maze. Our next activity at the Dole Plantation was the Pineapple Express Train Tour, which was fun and educational. It lasted about 20 minutes and we learned all about the history of the pineapple and heard the story of James Dole, who pioneered the pineapple industry in Hawaii. We traveled though the pineapple plantation and saw a variety of other crops, including lychees! And, of course, lots and lots of pineapples! This is going to sound really dumb, but I’m going to say it anyway. I always thought pineapples grew on trees, but they actually grow in a bush on the ground. Check ”˜em out! It takes about 20 months for a pineapple plant to produce a fruit and another 14-15 months to produce a second fruit. Neat, right? I had no idea! Obviously, we needed to do this after the tour: Before we left the Dole Plantation, we stopped into the gift shop and bought a sparkly pineapple Christmas tree ornament and some dried pineapple chunks, which we immediately broke open as soon as we got into the car. They were actually sort of juicy for dried fruit! Would you rather eat pineapple or banana?

P.S. Be sure to enter my giveaway to win some Oakley sunglasses!