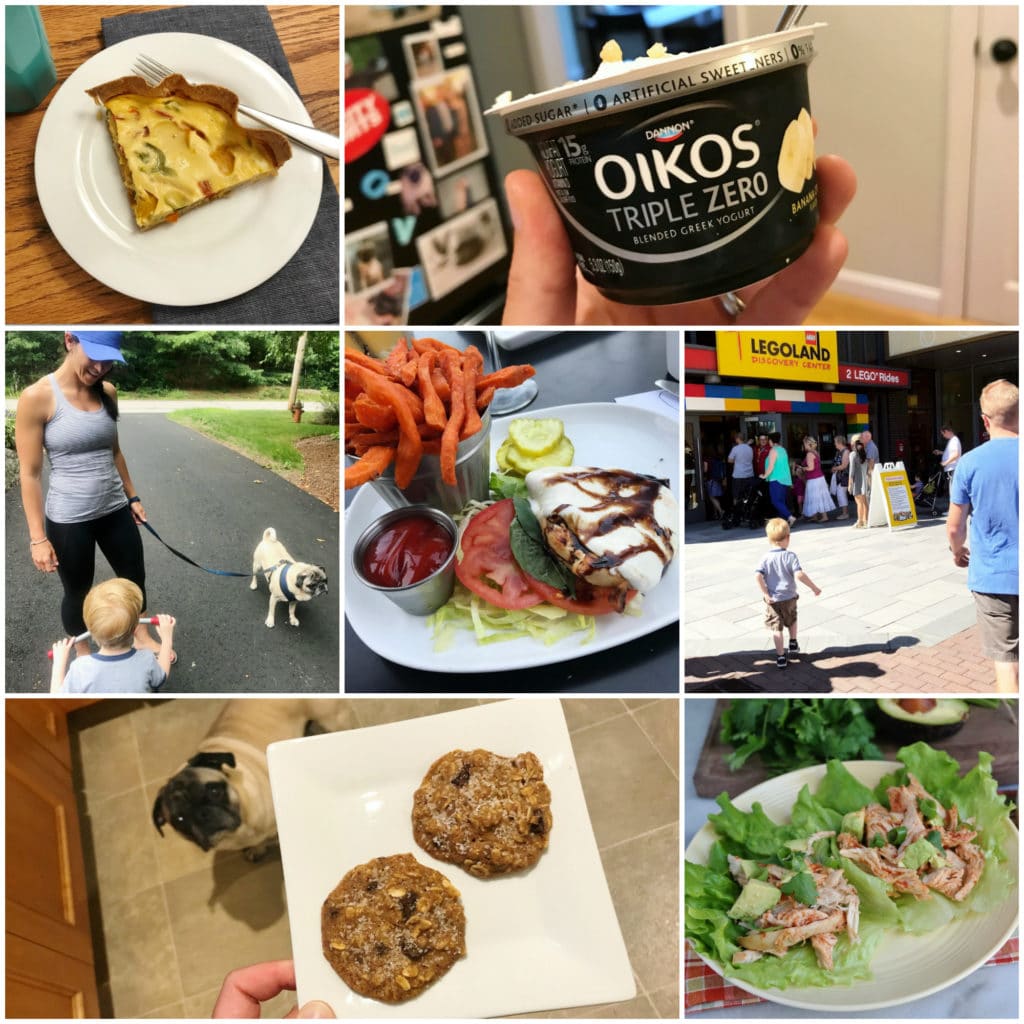 I have partnered with Dannon to help promote Oikos. I have been compensated for my time commitment to review Oikos. However, my opinions are entirely my own and I have not been paid to publish positive comments. Thank you to Dannon for partnering with me on this blog post.

Since Mal is off for the summer and Qman is only in daycare part-time, I’m busting my tail to get all of my work done Monday through Thursday, so I can enjoy “summer Fridays” with my boys. I’m up and at ’em at 5:15 AM along with Murphy, who is starving for breakfast. He’s practically jumping in circles around me as I walk into the kitchen. I immediately feed him because he’s making quite the ruckus and I don’t want him to wake up Mal and Quinn and then I pour myself an iced coffee. After that, I head upstairs and sit down at my laptop. It’s time to work – at least for a little while. At 7:00 AM on the dot, Quinn’s alarm clock tells him it’s “ok” to wake and get out of bed. I hear his bedroom door open, so I poke my head into the hallway, say “good morning,” and give him a big hug. (I love sleepy Quinn. He’s so cuddly!) Quinn tells me he want to “go downstairs,” so I scoop him up (and his seven blankets – the blanket posse grows bigger everyday) and bring him downstairs. We watch a show together while he wakes up.

I start to get hungry, so I make breakfast for Quinn (pancakes, peaches, and milk) and reheat a piece of Easy Tortilla Breakfast Quiche that I had made the night before. Just as we’re about to sit down to breakfast, Mal wakes up and comes downstairs into the kitchen, so I reheat a piece of quiche for him too. I also make him some toast while he pours himself an iced coffee. Mal finishes off breakfast with a strawberry Oikos Triple Zero Greek Nonfat Yogurt (because he’s obsessed with them too). Meals are still kind of a struggle with Quinn, but we do our best to make them fun. This morning, he eats a couple of mini pancakes, all of his peaches, and some milk, so Mal and I are happy! 🙂 After breakfast, we get ourselves ready for the day and the drive to Legoland Discovery Center at Assembly Row in Somerville. We purchased tickets online and arrived right when it opened, so we only waited in line for a few minutes. Legoland was awesome! Qman absolutely loved it. There was so much to see and do, including interactive games, play area, rides (FYI: kids need to be at least 3-feet to ride most of them), and even a short 4D movie, which was my favorite part of Legoland! I’ve never seen a 3D movie and this one was 4D, so we got wet and wind blown in our faces! 🙂 After some fun at Legoland, we grabbed lunch out at a restaurant before heading home for Qman’s afternoon nap. During nap time, I clean up the house and do payroll for Designed to Fit Nutrition. Mid-afternoon, my stomach starts to grumble, but dinner is still hours away, so I grab a banana creme Oikos Triple Zero Greek Nonfat Yogurt from the fridge, add some rice cereal and chocolate chips, and snack time is one of the most delicious ever! The combination of flavors and textures is basically dessert, but without a ton of sugar and a protein boost to help me feel satisfied. When Quinn woke up from his nap, it was time for a family walk with Murphy around the neighborhood. It was a fun way to get some exercise in for the day! 🙂 When we returned from our family walk nearly an hour later, it was just about time for dinner, so I whipped up a quick meal for us. In the mix: Ground chicken, rice, spinach, and jarred cowboy caviar. So good! After dinner, Mal and I give Qman a bath, get him in jammies, read books, and put him to bed. Mal and I usually take turns doing his bedtime routine, but, recently, we started doing it together as a family. It’s a nice way to spend some extra time with one another.

Once Quinn is asleep, it’s time for Big Brother and dessert. I had two Salted Caramel Chocolate Chip Cookies and, my goodness, they are the best treat ever. I love how decadent these cookies are – the Oikos Triple Zero Greek Nonfat Yogurt definitely adds some serious flavor and extra nutrition! After our show is over, we get ready for bed. Mal and I both read for a bit and lights are out just 15 minutes later. What a day! 🙂