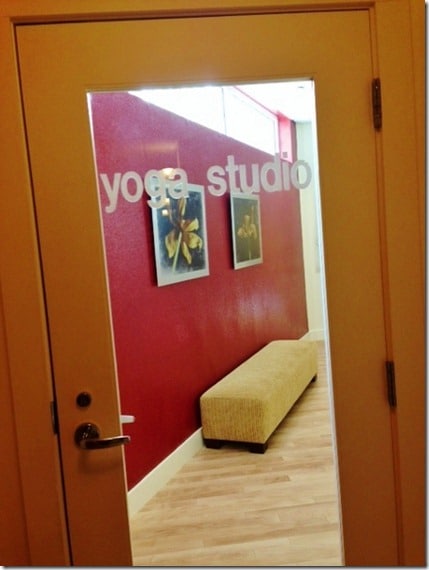 My first day at Canyon Ranch was amazing. It was a great mix of stimulating activity and pure relaxation. Basically, it was the best of both worlds.

I woke up hungry and excited for breakfast this morning. After last night’s delicious dinner, I was really looking forward to breakfast. It’s by far my favorite meal of the day and everything I tried at Canyon Ranch at that point was healthy and delicious, so I was ALL about breakfast.

Not surprisingly, breakfast started with a decaf iced coffee with almond milk. (I’m not going to lie, I got pretty excited when my server said they had almond milk. Oh, it’s the little things in life!) Once I had a few sips of my iced coffee, I headed to the breakfast bar, which is available every morning at Canyon Ranch. It had all sort of goodies on it, including fresh fruit, granola, cereal, yogurt, nuts, dried fruit, baked goods, and something called “Peanut Butter Delight,” which, of course, I needed to try. I added a scoop of the “Peanut Butter Delight” to some banana slices, which were soaked in a lemon meringue sauce. (I’m not 100% positive whether it was actually a lemon meringue sauce or not, but it tasted a lot like it!) I topped everything with a sprinkle of ground flax, and, holy yum, I loved it. It was almost like eating dessert for breakfast. FYI: The “Peanut Butter Delight” is peanut butter mixed with ricotta, vanilla extract, cinnamon, and honey. Here’s the recipe! I honestly could have eaten what was on the breakfast bar, but I figured I should order something from the menu. I wasn’t sure whether I was in the mood for sweet or savory for breakfast, so I ordered both: Gluten-Free French Toast and some scrambled eggs. Both were delicious. The scrambled eggs were especially flavorful. Hello, fresh eggs! After breakfast, I attended a class called “Advanced X-Training.” Before I tell you about it, let me give you a little info about the group exercise classes at Canyon Ranch. From 8:00 AM – 4:00 PM every day, there are anywhere from three to seven classes offered each hour in six different categories: aquatic, cardio, dance, flexibility, mind-body, and strength. And within these categories, there are four fitness levels (beginner, intermediate, advanced, all levels). There are seriously SO MANY CLASSES. You could stay at Canyon Ranch for a whole week and still not do all of them. Some of them repeat (M, W, F), but there are specialty classes (i.e. “Real Deal Boxing,” “Berkshire Beat,” “Versa Bootcamp”) mixed in, so there’s always something new and different to try.

Ok, back to the “Advanced X-Training.” This class was only 30 minutes (most classes are 45 minutes unless otherwise noted), but it was fast paced and challenging. Using the indoor track and various equipment (medicine ball, ropes, kettlebells), we did a circuit-style, full body workout. There were six stations, each with a different exercise, so we performed that movement until the person running completed one lap of the track before moving onto the next station. We did the circuit three times with a 60-second rest in between, and I was a sweaty mess by the end. I definitely got a great workout! Up next was “Yoga for Athletes,” a 45-minute class, which included flowing athletic moves (arm circles, lunges) and yoga poses to improve strength, balance, and flexibility. It was a nice mix of athletic-y exercises (planks, push-ups) and traditional yoga postures. And the room had a beautiful view. After yoga, I attended a lecture called “Inflammation & Immunity,” which was led by Dr. Teresa Hubkova. Most of the information covered was intended for general health and wellbeing, but Dr. Hubkova talked a little bit about autoimmunity and specifically Ulcerative Colitis. She actually went on and on about how frustrating the disease is for patients and doctor, and then shared all of the terrible UC symptoms. The woman sitting in front of me squirmed in her seat and then said: “That sounds horrible.” Yep, yep it is. And I’m not even ill with the disease! Ugh, IBD is the worst.

Anyway, I just wanted to share a couple of the new treatments out there for UC and other autoimmune diseases: Ok, enough of that. Let’s transition”¦

After the lecture, I headed to CafÃ© Tasse for lunch. After back-to-back to workouts, I was starving! I ordered my lunch and then helped myself to some iced tea. A little while later, my lunch was served to my table: toasted turkey, brie, and apple sandwich on gluten-free bread. Mmm! It was awesome. I finished off lunch with a couple of gluten-free chocolate chip cookies. I love these babies””they don’t even taste gluten-free!