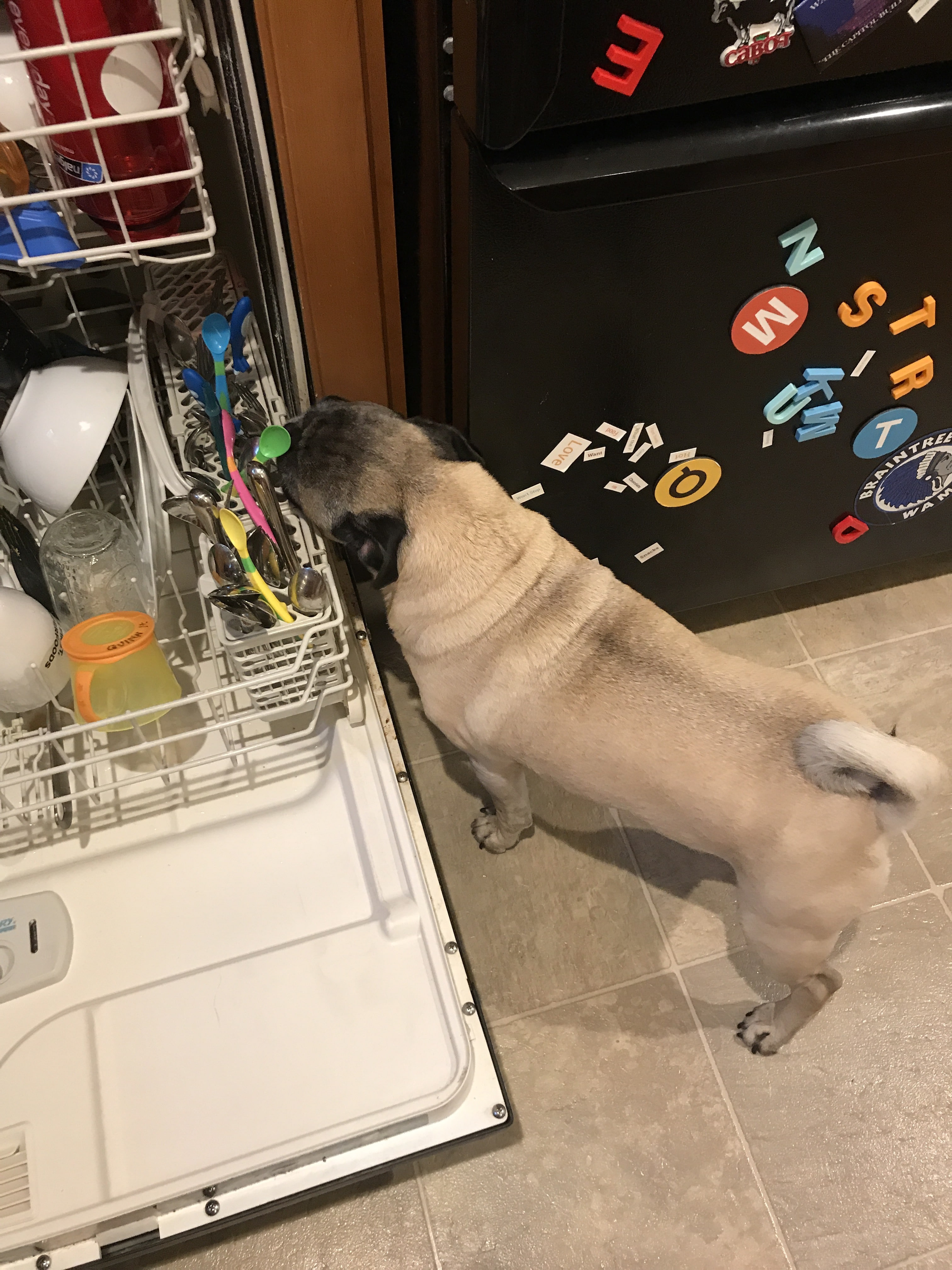 Hi, guys! Happy Thursday to you! This week is FLYIN’ for me!

Yesterday was quite a busy day, and I spent almost of it at the Derby Street Shoppes. My morning started with an early wake up before the rest of my family – well, ok, Murphy felt me get out of bed and followed me downstairs. The potential for food with just so strong!

For breakfast, I made myself a rice cake with a thick layer of sunflower butter and banana slices on top. Then, I took the pug for a walk. Quinn must have heard Murphy and me come back into the house because, as soon as we got settled, I heard his bedroom door open. I walked upstairs, gave him a big hug (he’s so cuddly in the morning), and carried him downstairs into the living room. He watched a little TV while I got ready for the day. (Later in the day, I found this photo below on my iPhone. Apparently, somebody borrowed it to snap some photos!) Once I was ready, I got Qman ready for school and packed up the rest of my things to take for a full day at Derby Street. (The bag on the left is a homemade beach bag from Quinn.) I dropped Quinn off at daycare and then headed straight to Derby Street for an outdoor spinning class with Rev’d. The class was a lot of fun – I was moving and grooving all over the bike, so, by the end, I was a sweaty mess. Holy workout + humidity! If you’re a local reader and would like to check out a free class, follow this link for more details. Kerrie met me there a couple of hours later, and we immediately got down to business. She was away for a few days, so we had lots to catch up on. My stomach started to grumble, so I dug into my lunch a little early. On the menu: Trader Joe’s chicken strips with white rice and buffalo sauce. It wasn’t the most nutritious lunch, but I was in a hurry and there wasn’t much food prepped in the house. It was still really tasty! I mean, just about anything with barbecue sauce is delicious! Shortly after that, we had a meeting with our marketing company. It was actually more like a follow-up meeting just to make sure we are on track with everything that we have planned in the coming weeks, like the Post-Summer Slim Down and the webinars associated with the launch of Nutrition House. After our meeting, Kerrie and I tested out some new software features (on the development site), which are going deploy any day now. They’re so cool – can’t wait for our coaches and clients to see them! Mid-afternoon, I started to get hungry again. I was planning to just buy a snack, so I asked Kerrie if she wanted anything while I was up. She actually said she packed a second lunch, and I immediately thought it was such a great idea. I knew a snack would take the edge off my hunger, but a second lunch with “real food” would satisfy me much longer. So, I took a quick walk over to Whole Foods to grab lunch #2. It was mostly veggies with a piece of fish and chicken breast for protein, and it kept me full for quite a while. I didn’t even need a snack before dinner, like I normally do! I finally packed up around 5:30 PM and headed home. When I pulled into our driveway, I saw that the basement door was open. It was a little strange, so I decided to see what was going on inside. I was surprised to see Mal in the middle of a work out and Quinn playing video games. If there’s a will, there’s a way! Haha! Once I got settled at home, Quinn wanted to take his bike out, so we went for a family walk around the neighborhood, which was a nice opportunity for me to catch up with my boys.

When we returned from our walk, I started to make dinner while Mal and Quinn played T-ball outside. Murphy kept me company in the kitchen and kindly offered to pug pre-rinse the dishes in the dishwasher. On the menu for dinner: Sweet potato hash with bacon, red bell pepper, and chives. How to: Roast sweet potatoes in the oven. Cook bacon and chop into small pieces. Then, use the grease to sauté the red bell pepper. When the veggies are done,  mix them with the bacon in a large bowl. Top with chopped chives. Serve! I also sautéed some baby spinach in some leftover bacon grease, which was an especially delicious idea! This dinner was so good! We didn’t sit down to dinner until almost 7:00 PM, so after I cleaned up the kitchen and cuddled with Qman on the couch for a little while, it was his bedtime. After we put Quinn to bed, Mal and I caught up with Big Brother, and I ate some Pumpkin Spice Cheerios mixed with Peanut Butter Puffins. It was an awesome combination of cereal goodness! Do you ever eat two lunches instead of an afternoon snack?