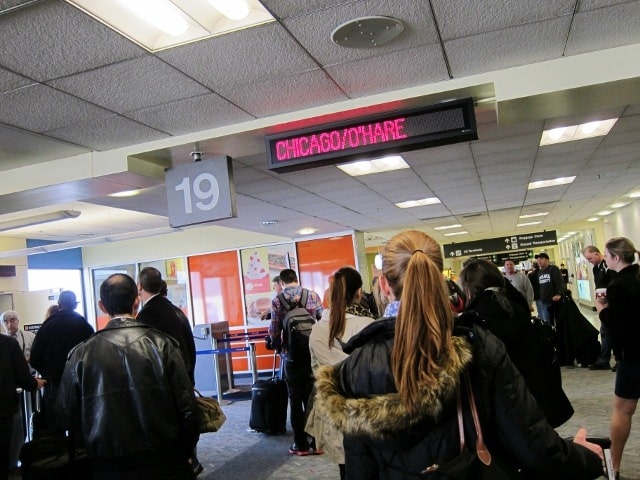 Murphy totally knows when I’m leaving for a trip. Last night, when I packed up and laid-out my things, he paced around the house with a semi-panicked expression on his (adorable) pug face. And then, this morning, he woke up, ate breakfast (pug priorities), and then acted super bummed””not just tired like he sometimes is in the morning, but sad and mopey. I couldn’t bare to see his sad pug face (and I always hate to leave him), so I suggested to Mal that we take him along for the ride to the airport this morning. As always, Murphy was psyched about a ride in the car! Before heading to the airport, Mal and I stopped at 1st Stop Coffee for iced coffees. Mal loves this place and has been raving about it for weeks now, so we finally stopped by this morning. It had all sorts of fun flavors on the menu (butterscotch, eggnog), so I was happy. I ended up ordering a decaf French vanilla with milk. Sadly, 1st Stop Coffee doesn’t have a ton of decaf iced coffee flavors, but, the next time I go, I’m going to order a fun caffeinated one. Digestively, I’m feeling a lot better, but I figured I should play it safe since I have a full day of travel ahead. Once we had coffee, Mal and I stopped by The Wheelhouse Diner for breakfast. Remember this place? Mal and I used to go all the time. It’s literally been years since we last visited, so we were super psyched to eat there this morning. Best diner ever. Over breakfast, Mal and I reminisced about all of the good times we had at The Wheelhouse over the years, like when we used to go with Dave and Marie after Body Pump or when we’d go super early in the morning before Mal had to be at school and sit with all of the old guys at the counter. Besides a fresh coat of paint on the walls (they’re yellow now), we were happy to see that The Wheelhouse didn’t change all that much. Even our favorite chef and waitresses still worked there! For breakfast, I went with my usual Wheelhouse meal, which is a #3 (2 eggs with homefries and toast), but I asked for extra homefries instead of toast this time. Breakfast was just as delicious as I remembered! All of those homefries were super filling, so I left the Wheelhouse feeling pretty stuffed. We left Murphy in the car while we ate breakfast (he usually hangs out and sleeps), so Mal decided to sneak up on him. Murphy must have heard him coming because he popped his little pug head up as soon as Mal approached the car. As you can see, Murphy wasn’t impressed with Mal’s little game. Just a short while later, we arrived at the airport. I said goodbye to Mal and Murphy and then headed inside to check-in for my flight and search for a place to get my nails done. Unfortunately, the nail salon in terminal C was closed for the day. Wicked bummer. I ended up doing a little window shopping and then using Logan’s free Wi-Fi to catch up with some emails. Before I knew it, it was time to board the plane to Chicago. Over breakfast this morning, Mal and I talked about my travels to Des Moines. I told him I had a layover at Chicago O’Hare to which he immediately replied: “Cool. Don’t you love that airport?” It’s sort of random Mal remembered that, but he was right. O’Hare is one of my favorite airports because it’s huge and has all sorts of fun shopping and great restaurants. I honestly enjoy having layovers there!

Do you have a favorite airport? If so, which one is it? How do you typically spend your time at the airport?