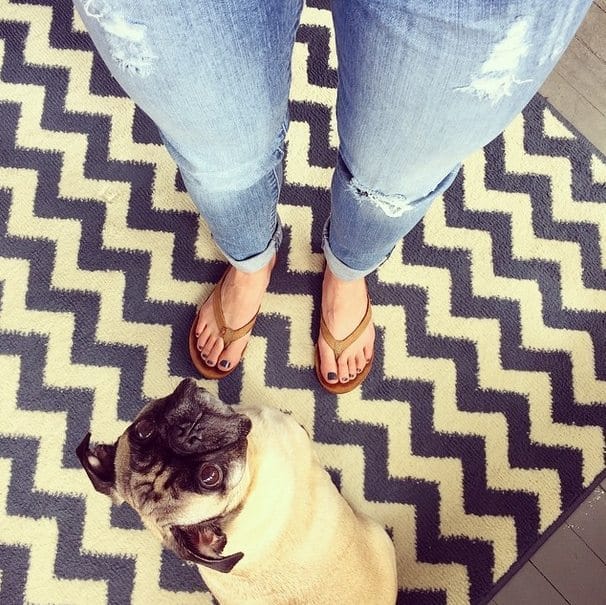 This edition of CNC Instagram Live is from September 19th, and I received a great group of questions from you guys for it – thank you for sending! I love having a running list and hearing what kinds of topics you guys are interested in hearing about, so keep ’em coming! Ok, into the questions we go!

My answer: it depends! It really comes down to personal preference. Do you feel ok working out on an empty stomach? If so, then I say go for it! Personally, I like to have a little something in my stomach before working out because an empty stomach can make me feel queasy and uncomfortable. I’ve also noticed that I have more energy with food in my stomach. Those pre-workout carbs really do kick in!

I once heard an episode of The Mind Pump Podcast that talked about how some people swear it makes a difference in fat burning, but science says that difference is very minimal. My opinion? If you’re only working out for 20-25 minutes total, then fasted cardio probably doesn’t rank very high on the totem pole of weight loss. Nutrition, sleep, and recovery are probably a lot more important, so definitely consider those first. In the end, it’s an individual choice and if you feel like its working, then you do you!

2. What are my favorite jeans?

The pair I’m wearing in the video! 🙂 Totally not planned, but maybe it was subconsciously in my head after reading this question? Ha! These jeans are from Nordstrom and not only were they $64, they are soooo comfy! They are a little more casual, so I’ll usually wear them running errands or out to dinner at a casual place. I love them and wear them all the time!

I’m definitely not secretive about how I make money via CNC. In fact, I’m more than happy to share! I haven’t talked about this on the blog in a million years, and it’s changed quite a bit, so this will be an interesting update for long-time followers!

Nutrition coaching has really taken off for CNC, and it’s the main way I make money. I currently have two RDs and another nutrition coach working for me. Our nutrition coaching is a service-based, all online business, and we use WhatsApp (similar to Voxer) to communicate to keep all client interactions one-on-one. It’s a big part of my income, and I absolutely love it because motivating and helping people reach their goals is a big passion of mine!

The three other ways I make money are:

So, these four streams of revenue combined make my income. Things have changed so much over time, and if I had answered this question five or six years ago, some of these streams wouldn’t have even existed. At one point, the blog was my main income source, but the blogosphere has changed and there’s a lot more going on with social media now, especially Instagram and Facebook. I’m all about rolling with the changes and doing what I can to keep up! Helping multiple streams of revenue does help – our mortgage isn’t going to pay itself!

A bunch of people have asked how I’m doing, and I really appreciate it, so thank you! I don’t know if it’s the Entyvio that finally kicked in or the two different functional practitioners that I’m working with, but I’m doing a lot better. We’ve been trying a few new things here and there, one of them being really paying attention to my digestion. I’ve never approached my disease from a digestion standpoint, but if you think about it, it makes sense. If the food traveling down to my intestines isn’t fully digested, it might be causing my immune system to react. Plus, if I already have a leaky gut situation, partially digested food is only going to make it worse. Needless to say, it’s been an interesting journey!

In addition, I’ve started taking a new probiotic in liquid ampule form by a company called Livespo. I found the company through a IBD Facebook Group post and ordered the ampules online. They’re hard to get because they sell out so quickly, but I finally got my hands on some and started taking them. A company customer service representative actually emailed me shortly after to see how I was doing, and I told her that I was still struggling. She suggested that I up my dose to three a day, and I started doing a bit better. Not 100%, but better. The same woman emailed me again to check in, and I told her I wasn’t all the way there yet. She ended up sending me a different probiotic strain for FREE, which is so awesome. They really want people to get better! The new strain in addition to the previous strain I was taking now seems to be making a difference, so knock on wood, I hope it sticks!

What’s great is that the probiotic ampules aren’t crazy expensive. I was paying a ton for VSL#3 and never really got any better on it. So I’m going to keep trucking along with the new probiotics (they’re part of my anti-candida protocol) and keeping my digestion in check (and continue with Entyvio). Let’s hope for total remission!

He’s actually snoring in the other room right now, so I hope he’s feeling a little bit more comfortable. For those of you who haven’t been following along, here’s a little recap:

Mal and I were downstairs the other night and heard him jump off the bed, and we both gave each other an “Oh no…” look. We’ve been trying to avoid jumps because it’s just too much impact for Murphy’s poor pug back and legs. Of course, he started acting weird that night and we decided to see how he was feeling the next day. Low and behold, the poor pug was in so much pain that we ended up giving him some pain medication that we had from the last time he hurt himself like this, about three months ago. After taking the pain medication, he was doing a lot better; we even went on a walk and he was acting like himself. But the next morning he was again in so much pain that he was yelping while barking, and by mid-day was shaking a little, so I knew it was definitely time for a visit to the vet.

The vet ended up prescribing more of the pain medication, and told us that this could actually be a long-term solution for us. Her own dog has been on this medication for about four years now and is still trucking along. She also gave us a referral to a neurologist to have them do an MRI; unfortunately, surgery could very likely be a possibility. However, I just don’t know if I want to put Murphy through all that. Poor pug has already been through one surgery, and the MRI alone is between $1000 – $3000 (and it could potentially give us bad information, which I am not sure I’m ready to hear yet). I love that dog so much, so I’m really torn about what to do. Though I don’t really love the pain medication as a long-term solution either, for now, we’re hoping that it works. Poor Murph!

That’s all I have for you guys today! As always, thanks for the awesome questions and keep them coming!