You Have A Choice 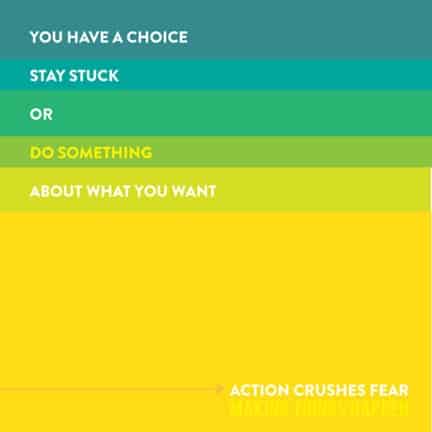 I love this quote. And it reminds me of a conversation I had with Mal a few weeks ago.

On the drive home from CrossFit one night, I was bummed about the workout I had just done. I finished and had fun, but I wasn’t especially proud of my performance. I actually had a few workouts that week I wasn’t super happy with performance-wise, so I asked Mal how he thought I could improve. He simply said: “Stop being a wuss.”

Typing those words right now actually kind of cracks me up””mostly because it’s such a Mal thing to say””but he was totally right. If I wanted to get better, I had a choice: keep doing what I was doing (using weight that was comfortable) or stop being a wuss and challenge myself with some heavier weights.

Ever since my conversation with Mal, I’ve been trying to step-it-up and really push myself during workouts””and it’s starting to pay off. Last night, for instance, I did a whole workout with my previous 1 rep max for Power Cleans! When I got home from CrossFit, I snacked on some red bell peppers with garlic hummus while I cooked dinner. Dinner was a big salad topped with canned tuna mixed with chickpeas and Parmesan cheese, which was a delicious combination. Approximate measurements: 6 ounces canned tuna + half can of chickpeas (7-ish ounces) + 1/2 cup of grated Parmesan. So simple, so delicious, so satisfying. After dinner, I ate a spoonful of peanut butter with an Adora disk. A couple of hours later, I wanted something more to eat, so I broke out the pistachios. When was the last time you were “stuck” in life? How’d you get what you wanted?