The 2012 Woman’s Day Red Dress Awards were quite the event. It was actually one of those experiences that inspired me to want to make a difference, which is part of the reason this post took so long for me to put together. I wanted to make sure it was as thorough as possible to help raise awareness about heart disease in women.

The Red Dress Awards, of course, were a fancy-schmancy event, complete with celebrities, red carpet, fancy (red) dresses, cocktails, glitz, glamour, and everything else that goes along with a fabulous Manhattan soiree. The purpose of the event was to celebrate the hard work of devoted individuals and their commitment to the fight against heart disease in women. Even though my photos show a good time had by all, the event supports a serious cause that needs more awareness brought to it.

With that said, I’m going to give you guys a quick recap of the cocktail hour before the awards ceremony and then move onto the important/serious information related to heart disease. Sound good? Great.

The Woman’s Day Red Dress Awards were held at the gorgeous Rose Hall at Lincoln Center. What a space. The views on the city were stunning. As a guest of Campbell’s, I had the opportunity to interview Richard Blais, the winner of Bravo’s Top Chef All-Stars and the Campbell’s Healthy Heart Award Presenter at the ceremony. He was such a nice guy and totally down-to-earth. Even from our brief conversation, I could tell he was really passionate about cooking and healthy living.

I asked Richard if he was okay with me videotaping our interview so I could share it with my readers and he agreed. Yay! In our interview, I asked him about running the New York City Marathon, his inspiration for his Spicy Bouilliablais, what he thinks people would be surprised to know about reality cooking shows, and what his last meal on earth would be. As expected, I’m totally nervous and awkward in this video. Derp.

After I interviewed Richard, Theodora and I went in search of food and cocktails. We each started with a glass of sparkling rosÃ©. And then we hit the appetizer table. The National Pork Board was one of the event’s sponsors, so there were a ton of pork-inspired dishes as well as fried calamari, a crouton bruschetta, and a selection of cheese, crackers, and breads. I helped myself to a little bit of everything.

After we chowed down, Theodora and I headed over to check out the photo booth. Obviously, we needed to get a photo together. Our next stop was the red carpet where things were bumpin’! 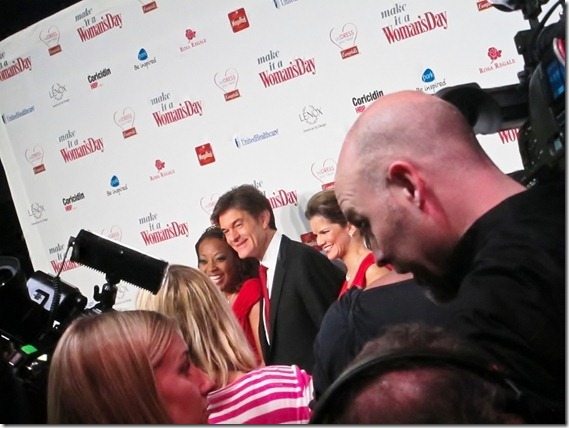 Dr. Oz was one of the honorees at the Red Dress Awards. (Cameras weren’t allowed into the awards part of the evening, so I only have photos of a couple of honorees that I snapped before it.) Besides hosting The Dr. Oz Show, he also directs the Cardiovascular Institute and Complementary Medicine Program at New York Presbyterian Hospital, and his research includes heart replacement surgery, minimally invasive cardiac surgery, complementary medicine, and health care policy.

During the awards ceremony, Dr. Oz shared a story about performing open-heart surgery on a 25-year-old woman whose family brought her fast food the day after the operation. He said, at that moment, he realized that he wasn’t really doing his job if he didn’t educate his patients on the dangers of heart disease and what they could to prevent it. Dr. Oz actually said he’d much rather be put out of business than perform preventable open-heart surgeries. Ever since his experience with that young woman, Dr. Oz has been working to help fight heart disease.

Also on the red carpet was Star Jones, another one of the evening’s award honorees. I have to admit, I always thought Star Jones was just some attention-seeking, tabloid celebrity, but I learned that there is so much more to her. She’s best known as one of the hosts of The View, but did you know she’s also an attorney? Me either! She’s been a licensed attorney in New York for the last 25 years, and was a senior assistant attorney in Brooklyn before the age of 29. Impressive, right?

Anyway, Jones’ work in the law field isn’t why she was honored at the Red Dress Awards. A few years ago, she underwent elective open-heart surgery after being told she had the early signs of heart disease. Jones survived the surgery and her recovery with flying colors, so just a week after coming home from the hospital, she called the American Heart Association (AHA) and asked them what she could do to help their organization. Apparently, Jones could do a lot.

In 2011, Star Jones was named the American Heart Association’s National Volunteer and she’s been making heart disease awareness her life’s work since. Jones said she always thought heart disease was an “old white man’s disease,” but she now realizes it affects all kinds of people. As an African American woman, she says she’s proud to be the “face of heart disease.” I love this quote from Jones: “I learned late in life that my health is my greatest asset. For she who has health has hope. And she who has hope has everything.”

Theodora and I only spent a little time checking out the red carpet because the awards ceremony was about to start. As I mentioned, I couldn’t snap photos inside, so I’ll do my best to recap without them! Hoda Kotb of the TODAY Show hosted the event, and she was really something else. I absolutely loved her. She was funny, witty, and so incredibly positive. Kotb is definitely one of those people who fully enjoys and appreciates life. Fun fact: Hoda loves Beyonce’s music!

Throughout the awards ceremony, we were entertained by a number of wonderful musical performances. Of note:

After the honorees were presented their awards, each of them spoke to the audience for a few minutes. Of course, all of them were wonderful and impressive, but Regina M. Benjamin, the U.S. Surgeon General (no big deal), really wowed me with what she’s done for increasing heart disease awareness and public health in general. I tried to summarize her contributions and achievements in this post, but there are just too many to list. If you have a chance, please read up on this woman. She’s amazing.

Other honorees of note:

Source: Losing Weight in the City

During the awards ceremony, presenters and honorees referred to the “heart guidelines” and “warning signs” of a heart attack, and I can honestly say I didn’t know much about either. I figured some of you might be in the same boat, so here’s some information about both.

More women die of cardiovascular disease than from the next four causes of death combined, including all forms of cancer. But, according to the American Heart Association, 80% of cardiac events in women could be prevented through a healthy diet and lifestyle. So, the AHA defined what it means to have “ideal cardiovascular health” by identifying seven factors that impact health and quality of life, known as Life’s Simple 7:

And the signs of a heart attack in women?

Signs of a Heart Attack:

If you have any of these signs, don’t wait more than five minutes before calling for help. Call 9-1-1…Get to a hospital right away.

During the awards ceremony, we watched “a little film about a super mom who takes care of everyone except herself” and doesn’t realize she is experiencing a heart attack.

If you watch the video, you’ll see that this woman ignores her heart attack symptoms because she’s too busy and doesn’t want to inconvenience others.

Many of the stories that I heard from honorees at the event involved seemly healthy (and some not-so-healthy) women, who thought their symptoms were no big deal until they experienced a cardiac episode. So, please know the symptoms of a heart attack and please take care of yourself. And please share that video with everyone you know. I’m so glad that I had the opportunity to attend the Woman’s Day Red Dress Awards. I learned so much and left feeling very inspired. Thank you Campbell’s for inviting me!

PrevPreviousHow Do You Know You’re Getting More Fit?
NextParking On FridayNext