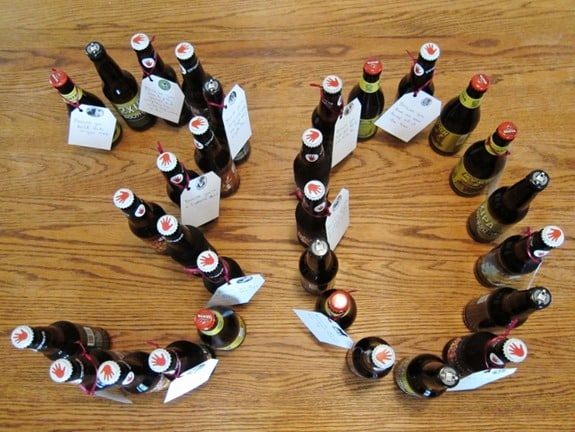 Hooray! Mal’s (first) birthday celebration was a success! It started with 30 beers, which he drank all at once. Not surprisingly, he got sick, so we ended up in the emergency room to get his stomach pumped. Ok, that’s a total lie. None of that happened, except the part about me giving him 30 beers.

Good beer is one of Mal’s favorite things in life, so I bought him 30 bottles for his birthday and attached (pug) tags to them with reasons why I love him. The reasons were a mix of serious: It was a little cheesy, but Mal really liked it.

I also bought/made him a ridiculous birthday card: Eat, drink, and be Murphy! I think Mal is still laughing about it.

And then there were birthday presents. Inside the bag was a fancy new watch. And inside the round container was White Chocolate, Cranberry, Oatmeal Cookies. Mal was psyched about both gifts. We had a little time to kill before dinner, so we enjoyed a couple of beers outside in our backyard. For dinner, we headed to one of Mal’s favorite restaurants: The Fat Cat.

We started with bread and a black bean dipping sauce. I’m not sure what was in the dipping sauce (besides black beans), but it sort of had a kick to it. It was really good. For my entrÃ©e, I ordered the Fat Cat Turkey Sandwich, which came with turkey, cranberry chutney, bacon, and cornbread stuffing on sourdough bread. It was pretty good, but it needed more turkey or smaller slices of bread because every bite I took was a mouthful of bread. I also drank a glass of wine with dinner.