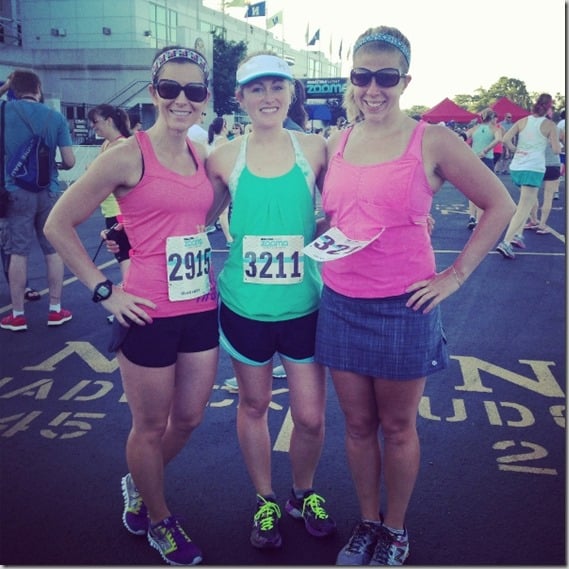 Good times with Anne and Theodora!! I’m so glad I had the chance to hang out with them in Annapolis for the ZOOMA race this past weekend. The three of us woke up bright and early on Saturday morning for ZOOMA Annapolis. I originally planned to run the half marathon, but I ended up dropping down to the 10K because I took so much time off from exercise this past spring, and I wasn’t properly trained. Basically, running a half marathon wasn’t a smart idea, and the 10K was a much better option for me. Both the half marathon and 10K races started at the Navy-Marine Corps Memorial Stadium at 7:00 AM. I loved that the races started at the same place and time, which made coordinating with friends easy, especially since we weren’t running the same race distance. (Anne and Theodora ran the half.) And, of course, it was nice to have some buddies to start the race with. Even though the weather was hot and humid on Saturday morning, and I hadn’t run very much in the past several weeks, I still felt pretty optimistic about the race. I didn’t think a PR was possible, but my spirits were high after doing the whole pre-race ritual with my running buddies””setting up my gear the night before, eating my usual peanut butter and banana breakfast, and having those excited-nervous butterflies in my stomach on race morning. I love everything that goes into racing, so I was happy and upbeat going into it. I blasted the David Guetta station on Pandora on my iPhone, and the first couple of miles went well for me. As I approached mile 3, however, I was really starting to feel the heat and humidity. My pace slowed down, but I was still trucking along and having a great time. I was also really enjoying the scenic course, which went through historic downtown Annapolis (adorable!) and then along the waterfront. It was a gorgeous race route! As I approached mile 4”¦ well, the wheels started to come off, and I slowed down a ton. I’m a total wuss when it comes to running in hot, humid weather, and I just can’t push through that gross feeling that goes along with it. Much of the race was out in the open, blazing sun, so I was dying of heat. My legs didn’t want to run, and I was so thirsty. There were only two water stops on the 10K route, which probably would have been fine if it wasn’t so hot. Seeing the second water stop was like seeing an oasis in the distance. Haha! I grabbed two cups of water and walked through the water stop to give myself a little time to recover. Running across the scenic Severn River on the Naval Academy Bridge was the hardest part of the race for me. It was a long, gradual incline with no shade, so my body just didn’t want to move quickly. I saw a bunch of people walking, which made me want to stop and walk too, but I didn’t let myself. I was shuffling along at a pretty slow pace, but I didn’t stop. The 10K turnaround was almost at the top of the incline on the bridge, and I was so happy to see it. (The half marathoners continued on over the bridge.) Running downhill across the bridge felt awesome and gave me a second wind, which helped me pick up the pace for the final mile. A spectator dressed as banana made me smile during the final stretch. Obviously. Bananas at races = the best. I finished the race in 54:43 (9:08), which is my slowest 10K to date, but that’s okay because it lit a fire under my butt to get back into running. More about this later. I did, however, take advantage of the foam rollers provided by Muscle Milk to roll out my tight lower back and legs. Loved this idea! Instead of a medal, finishers received a ZOOMA necklace. I loved the boxed snack. We had the option of hummus or chicken salad, and it came with crackers, baby carrots, and an apple. It was the perfect post-race fuel. Post-race with Theodora and Anne! Doesn’t it look like I just went swimming? I AM SO SWEATY! After the race, the three of us walked back to the hotel, showered up, and then headed out in search of food. And iced coffee. Naturally. We all wanted crab cakes for lunch (when in Rome), so we asked the hotel concierge for a recommendation, and she suggested Phillip’s Seafood, which was a great pick. It was right on the water with open, airy dining and a fun, laid-back atmosphere””totally my type of place. I ordered a crab cake with coleslaw, which was incredibly light and fresh (not drenched in mayo), and French fries, which I sprinkled with Old Bay seasoning (love that stuff). After lunch, we walked back to the hotel, grabbed our stuff, and said goodbye. Our girls’ weekend was over. All in all, I had a wonderful time in Annapolis this weekend! Thanks, ZOOMA, for a great time!

Who do you typically run races with? Friends? Your significant other? A running club? Solo?

What’s the coolest “perk” (or swag) you’ve ever experienced at a race?

P.S. The dog owners will love this video: Sad Dog Diary. It’s a little slow at first, but give it time. Mal and I were crying because we were laughing so hard!