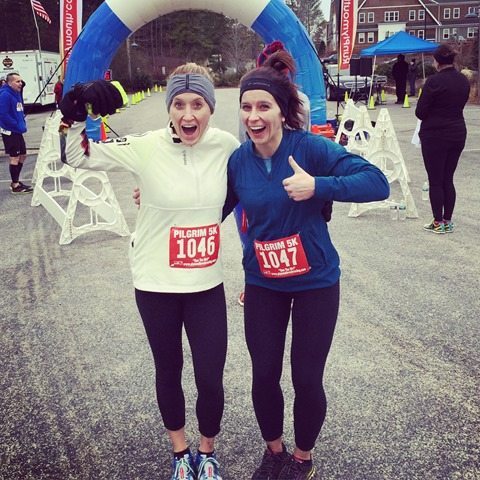 There aren’t too many half marathons in Massachusetts this time of year, so I was psyched when I found the Winter Warlock Half Marathon about 30 minutes away. I had just run the super hilly South Shore Half Marathon and missed my goal time by about 3 minutes, so I wanted to redeem myself and run a better race. I really had high hopes for the Winter Warlock!

Well, I came down with a stomach bug the Friday before the race. Boo. My training also sort of fell apart toward the end because of a colits flare that would just not resolve itself. (An earlier-than-usual dose of Remicade has mostly gotten me back on track.) Long story short, I didn’t run a great half, but the actual race itself wasn’t my favorite either. Truthfully, it was a bit of a mess, but I ran it with my friend Marisa and we had a good laugh about the whole thing! When we arrived at the race, we saw that the line for the porta-potties was already getting long, so we immediately jumped in to wait. We spent about 20 minutes in line, and we later learned the race only rented 5 porta-potties for about 400 runners. We also later learned that more than half of the runners registered within two weeks of the race, but you’d think that would be enough time to get more porta-potties? Anyway… We headed inside to pick up our bibs. There were more lines, but they moved fairly fast. Marisa and I noticed that our bibs said “Pilgrim 5K,” not “Winter Warlock Half Marathon,” but no one else’s bibs had the name of the race on them either. In fact, we saw a lot of different bibs: “Old Sandwich Road Race,” “Plymouth Turkey Trot” (with Turkey Trot crossed out in black marker), and some plain white ones with either gold, blue, or green stickers on them. Along with the half marathon, there was also a 5K and 10K race, so we just figured the race organizers had some sort of system worked out and they probably just wanted to save some money by reusing old bibs. No big deal. Side note: I loved the Brooks Run-Thru Jacket

that I wore for this race. I had a long-sleeve tech shirt underneath and it was the perfect combo for a winter race (~35 degrees F). The jacket is mostly mesh with water-resistant panels on the shoulders, and it has big zip pockets (perfect for an iPod + GU) and a smaller inner pocket that kept my ID safe. This jacket would be great for spring running too!

The race was scheduled to start at 10:00 AM, but, because there were so few porta-potties and so many people still waiting in line, it was delayed about 20 minutes. Meh. It’s funny too because, while waiting in the porta-potty line, Marisa and I swapped stories about being late to races and literally running to the start line. Neither of us had ever participated in a race that didn’t start on time. Once everyone was ready to go, the race director said a few words and then we were off. There was no “on your mark, get set, go,” but we figured it was just a weird race and we’d roll with it. Well, at this point, some people started to run while others just walked. Ummm… Apparently, the official start was down a hill and around a turn. Well, ok, then. We were finally off and running! The race advertised “one of the most scenic wintertime courses in New England,” so I was really looking forward to the sights and sounds of my first winter half marathon. We started on Old Sandwich Road, a quiet dirt road surrounded by woods, and I immediately thought it was a nice start to the course… at least for a short while. As I approached the 10K turnaround, I saw Marisa coming toward me. She’s a faster runner than me, and I thought the course was an out and back, so I was surprised to see her so soon. She didn’t look thrilled, but before I could say anything, she said: “It’s an out and back twice.” Ugh. The beginning of the course was pretty, but, after that, it was basically the same thing over and over again… just trees and dirt and more trees for 13.1 miles. There weren’t even hills to look forward to! At the half marathon turn around, I saw Marisa’s husband (he snapped the photo below – haha!), who was one of a half dozen spectators. I waved and then I turned on my music. I had taken a packet of GU shortly before that, so I assumed it kicked in because I felt pretty good. I was only at mile 7 or so, but I decided to pick up the pace a little bit. My plan was to really turn it on at mile 10 and finish strong, but I didn’t feel as good as I normally do at the end of a half. I really wanted to do well, so I told myself I needed to work for it. I was still feeling pretty good around mile 11 or so (I used RunKeeper to keep track – there were no mile markers on the course after the 10K turnaround), but then I hit mile 12. Woof. I can usually push through the pain of the final mile of a race, but my legs just weren’t having it. Sure, mile 12 was my fastest of the day, but it hurt so bad, I literally had Bambi legs when I crossed the finish line. I truly gave it my all at the end, and I know it was the best I could do, so I wasn’t totally disappointed by my performance. After the race, we went inside to get water and snacks. Sadly, there were no finisher medals, and I was told the shirts didn’t say half marathon on them. (I didn’t get one.) So much for race swag. Whomp whomp.

The race times were posted on a bulletin board, so Marisa went to check hers. She couldn’t find herself anywhere in the half marathon finishers, so she went to talk to the time keeper guy. It turns out she was registered for the 5K even though her race registration clearly said ‘half marathon.’ I figured since we registered at the same time and had similar bibs, I might have the same issue with my registration. It clearly said ‘half marathon,’ but I too was registered for the the 5K. When the initial results were posted online that evening, I couldn’t find my name anywhere. I found my number listed under someone else’s name for the 5K… last place with a time of 2:01:05. Fortunately, the results are correct now, but, wow, what a “memorable” race.

Have you ever been late to a race?