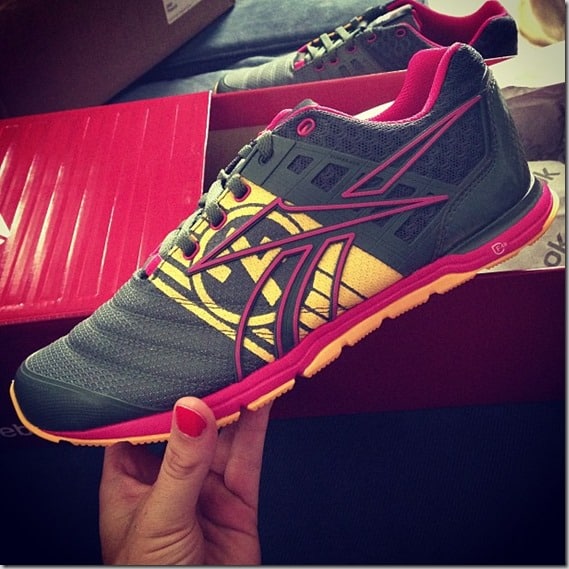 Yowsahs. It was a hot week of workouts. The temps were in the mid- to upper-90s all week long, so I was a sweaty, dipping mess for all of my workouts.

It’s truly incredible how much I sweat””Mal too. We always joke that we’re the King and Queen of Sweat at CrossFit because we’re always drenched at the end of a workout and so much more than anyone else. Doesn’t that just mean our bodies are really efficient with cooling us down? Something like that, right? Or maybe we’re just disgusting individuals? Ha! Anyway, here’s a recap of last week’s workouts!

I’m a dummy and decided to run 3 miles around my neighborhood and then 3 miles to our CrossFit box.

Somehow, I survived the heat and made it to 781 in one piece. I wasn’t planning to workout when I arrived (I just wanted to take a shower since our bathroom was being re-grouted, and I hadn’t showered in almost 2 days), but Mal was teaching a bunch of people how to do Butterfly Pull-ups, so I decided to join in the fun. And once I started to get the hang of it, I just wanted to keep practicing. Butterfly Pull-ups are definitely a move that I’m strong enough to do, but I need to practice, practice, practice in order to get them down.

As I mentioned in a previous post, a few of my friends work out at Quincy City CrossFit now, so I did a drop-in on Monday night to catch up and WOD with them. The WOD was killer, especially for a hot, summer night. Check it out: Translation: 20 minutes of as many 200 meter sprints as possible with a 30-second rest between rounds. OMG. So hot, so sweaty. Even still, I managed to get 17 rounds in 20 minutes. Not too shabby!

I really liked working out at Quincy City and would definitely drop-in for another class. They have a nice space and everyone I met seemed really cool.

I planned to take a rest day on Tuesday, but then “Cindy” popped up in the 781 programming. I’ve actually never done “Cindy,” so I really didn’t want to miss it. Plus, Kerrie and I planned to WOD together, so I knew she’d push me in the workout.

For the most part, I kept up with Kerrie during “Cindy” (she still beat me by 10 reps), but I know I wouldn’t have gone as hard if she wasn’t right next to me busting her ass. My score was 16+7 Rx. And, hello, I was good and sore for two days after! After “Cindy,” Wednesday was definitely going to be a rest day, but then the temperature dropped that evening. It was such a beautiful night, I just needed to take advantage of the “cool” weather and go for a run. Even just 10 degrees made a huge difference in my running, and I felt awesome, which was a first in awhile!

I felt great after a rest day, and Friday’s WOD was short and sweet, so I went to CrossFit yesterday morning. The Strength part of class was heavy, touch-and-go deadlifts. I partnered with a friend, and we worked our way up to 175 pounds.

The WOD was a quickie AMRAP, but it was so tough. Even though it was only 5 minutes, I still dropped the bar a bunch of times.

I managed to get 3+1 and then felt horrible after the WOD. The heat just kills me. FYI: My tank is from Reebok, and it says “who made the rules.” It’s one of my favorites!

Once again, Saturday was supposed to be a rest day, but then an expected package from my friends at Reebok arrived in the mail. Check out these beauties: CrossFit Nano Speed! I instantly fell in love. Reebok is so good to me. The Nano Speed is basically a lightweight running shoe for CrossFit. The toe-box is narrower and there’s more support and cushion compared the regular Nano.

Long story short, when I saw today’s workout, which included running, I really wanted to try out my new kicks. A running WOD right after I get the Nano Speed? Hey, it was meant to be!

With a partner, for time, complete:

2 mile run, switching every 400 meters
Then,
100 Burpee Wallballs while partner holds a push-up plank
One person works while one rests during the run; one person holds plank until other completes a set of BWB, then switch. The Nano Speed was perfect for today’s workout. My partner and I split up the 2-mile run into alternating 400 meter sprints, so I had a good chance to test them out. They’re definitely lightweight, and I liked how flexible and cushion-y they felt, especially compared to the regular Nanos.

If you’re into CrossFit Endurance, take your running seriously, or just don’t like running in the regular Nanos, I’d definitely check out the Nano Speed. They’re a great mix of Nano and running shoe, and they’re perfect for WODs with running in them. They also have a number of awesome, CrossFit-specific features, like a “lateral rope guard,” which makes them durable against exercises like rope climbs and Burpees that tend to destroy shoes overtime.

I’m a big fan of the Nano Speed and can definitely see myself wearing them for a lot of workouts””both in and outside of CrossFit.

Do you ever have trouble incorporating rest days into your workout schedule?

Why is CrossFit so fun?

Are you a sweaty beast?