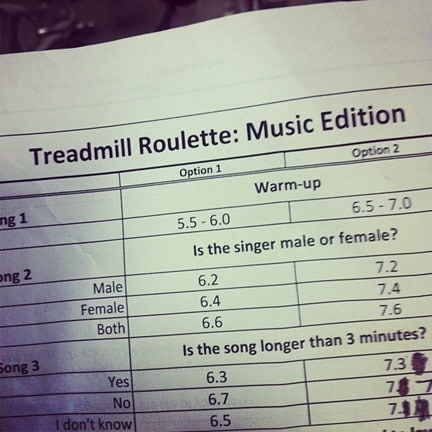 Hey, friends! I have a fun treadmill workout for you! I’ll tell ya all about it right after I recap breakfast.

I went back to my beloved French Toast Breakfast Scramble this morning, but I switched it up a little by using a small banana, liquid egg whites, and a bunch of fresh blueberries, which got all soft and juicy while they cooked. I also added a couple of scoops of peanut butter to my scramble and drank a decaf iced coffee with almond milk. Good breakfast. After breakfast, I headed to Planet Fitness to test out a treadmill workout that I created last night. I was honestly so excited about it, I couldn’t wait to get to the gym this morning. (I considered joining Planet Fitness just to use the treadmills during the winter, but then I decided to buy a day pass instead. Let’s hope all of this snow melts soon!) My plan for my weekly workouts was to run 5 miles yesterday, but then it snowed, so I didn’t want to run outside. (I’m a wuss when it comes to winter running.) I still had an itch to run, but the thought of cranking out 5 miles on a treadmill sounded pretty boring, so I started to think about what would entertain me. Music and intervals immediately came to mind and then the idea of playing a game popped into my head and soon Treadmill Roulette was born! How it works: Create a playlist with 10 songs or put your iPod on shuffle or use Pandora. Just make sure you have 10 songs to start. When the first song starts to play, begin running at an easy pace to warm-up. When the second song starts, read the corresponding question (“Is the singer male or female?”) and then change the treadmill speed based on your answer. You’ll see that different speeds are assigned to different responses, which is the roulette part. Continue to run at that same speed until the next song starts and do the same for the next question and so on.

Here are a couple of examples to demonstrate how the questions work: When song #4 came on my iPhone (I used the David Guetta Pandora station), it was “Cry for You” by September, which I thought related to love (when someone breaks up with you or on your wedding day because you’re so happy), so I increased the speed of the treadmill to 7.6. Song #5 was “C’mon” by Kesha, which I thought could be associated with running when people cheer you on at the end of the race, so I picked up the pace to 8.0. If I couldn’t connect a word in the title to running, I would have switched the speed to 7.8. Get it? Good. For a more advanced option, just add 1.0 to each speed.

For a shorter workout, only select 6 or 7 or however many songs you want.

The above workout with 10 songs took me a little over 44 minutes to complete, and I covered 5.5 miles.

After my treadmill run, I came home and snacked on a bunch of salted cashews. I wanted salt in a major way after that super sweaty workout. I quickly showered and then took Murphy to get his nails trimmed at the groomers. We scheduled our very first dog therapy visit  for next week, so I wanted to make sure his nails were nice and short to prevent him from scratching anyone. (He sometimes jumps up on people when he gets excited.) Instead of having Murphy’s nails cut, the groomer suggested having them filed down with an electric grinder (?), which, surprisingly, Murphy didn’t totally hate. Of course, he didn’t love it, but he didn’t spazz out either.

When we cut his nail (yes, Mal and I together cut ONE nail each month when we give Murphy his flee and tick/heartworm medicine), he goes crazy! He freaks out and cries like a big baby. It’s horrible and we feel like terrible pug parents, so I’m glad Murphy didn’t mind the filing as much. The filing is also great because it rounds Murphy’s nails instead of leaving them all jagged and sharp like cutting them does.

Of course, Murphy received lots of treats for his good behavior after his mani/pedi. By the time I got home from Murphy’s grooming appointment, I was starving for lunch, so I made some Avocado Egg Salad, which I spread on top of a piece of gluten-free toast (Rudis). On the side, I had some mashed butternut squash and red potatoes. And since we were just talking about running”¦

So you’ve tackled a bunch of 5Ks and conquered a couple of 10Ks. What’s next on your list of fitness goals? A half marathon perhaps? A half marathon is a great distance because it’s long enough so you need to work for it, but not so long that training completely consumes your life. The half marathon is my favorite distance to run, so here are my top tips for training for your first!

6 Tips for Training for Your First Half-Marathon

When it comes to winter running, would you rather run inside on a treadmill or brave the cold weather outside?

I think you know my answer!