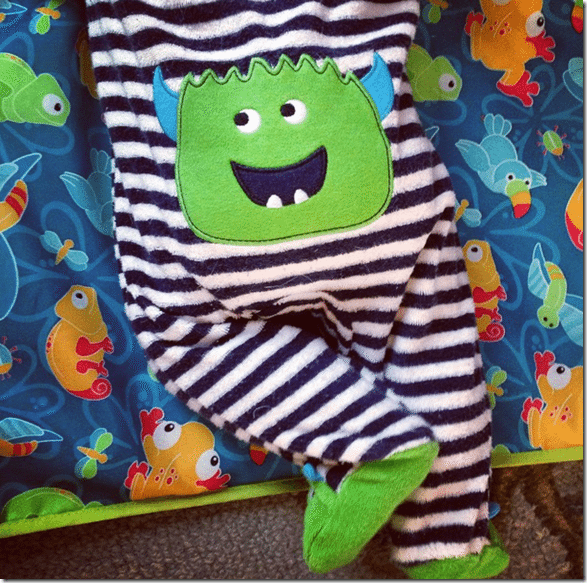 It’s Tuesday night. It’s late. I had one of those days where I ran around like a chicken with its head cut off, but I didn’t accomplish all that much. I managed to snap some photos throughout the day, but now as I sit down to write this post, I have no idea what to say, so I’m just going to type and see what comes out. I assume it will be some sort of random mix of tidbits from Tuesday. Let’s hope it works!

Quinn slept until 7:15 AM this morning. Since we (mostly) figured out his gas issue, he’s slept a whole lot better (even during the day). He slept for 9 hours straight and then another 4 hours last night. It was pretty awesome!

Mal made bacon for breakfast, so I woke up to a house smelling of it. Of course, I wanted bacon for breakfast too, so I made an egg sandwich with Creamy Spicy Pepper Jack from The Laughing Cow. It’s a new flavor and it is the bomb! I know I’m a Community Leader for the brand, but I would recommend this flavor even if I wasn’t. It has so much flavor, and it instantly makes an egg sandwich taste a zillion times better! Quinn is getting so much better at “tummy time.” He used to hate it and just lay there chewing on his fist and then eventually start to cry. Tummy time wasn’t very productive. Haha! But, in the past week or so, he’s gotten so much better at it… holding up his upper body and looking all around. He was even laughing and smiling during it today! I did 38 Squat Cleans with 85 pounds yesterday at CrossFit and my quads are so frickin’ sore today. I only went to CrossFit once last week, so I’m paying for it now! Yowsahs!

Murphy was super needy today. He stayed with our friends over the weekend, so maybe he just missed us? He was all up in my ish today, following me around the house and trying to sit on my lap whenever possible. Ok, it was actually kind of cute. I love that little furball so much (even when he lays on top of the clean laundry). Brooklyn Nine-Nine is an absolutely hilarious show. I love the humor so much! Mal and I literally laugh out loud when we watch it together.

Quinn, Murphy, and I met a couple of my old CrossFit friends at the dog park for a walk this morning. One of them recently had a baby, so we talked about all things related to pregnancy/labor/newborns and then determined that it’s all crazy. I mean, what happens to your body alone is nuts! Haha! Anyway, it was so nice to see these ladies and it made me miss the good old days at CrossFit. I consumed so much junk and booze this past weekend, but my colitis symptoms are better than they’ve been in weeks. It makes no sense, but, hey, I’m not complaining!

I’m really into hummus lately. I pretty much eat it everyday, and it really satisfies my hunger. But, maybe that has something to do with how much I eat in one sitting? I eat like half of a container at a time. It’s so tasty, especially with tortilla chips! I ate this microwaveable burrito for lunch today. It was just okay. The insides were mushy and weird. The battery in one of our smoke alarms died in the middle of the night (and annoyingly beeped until I got out of bed to disable it), so I popped into CVS this morning to buy a new one. And, of course, while there, I needed to buy more chocolate-covered cashews. This time, I went with the dark chocolate ones and, holy cow, they are incredible. I’ve eaten a crapton of them tonight. Tell me a random tidbit from yesterday!