Things I Love Most {Weekend Recap} 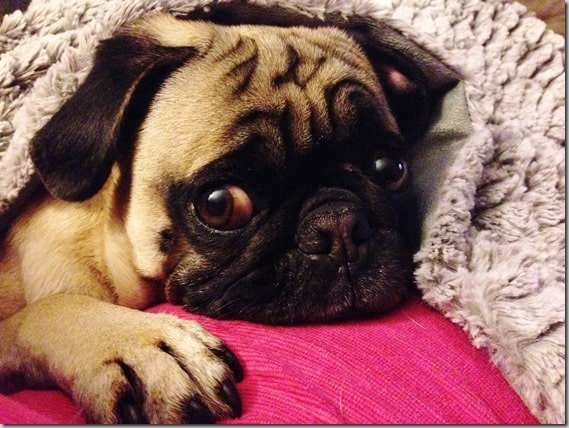 Hi, friends! Happy Monday! I hope you had a nice weekend! Mine was quite lovely.

On Friday night, I hung out with my favorite guys. There was a lot of DVR, cuddling, and general laziness. (Pugs make the best pillows; they smell like Fritos.) Murphy is a big fan of cuddling my stomach. I guess he likes to keep the baby warm or maybe he’s trying to hatch him or something? Or maybe he’s just a pug and totally obsessed with being ON ME at ALL TIMES? On Saturday afternoon, Mal and I headed into Boston for date night, which included dinner and a show. We ended up getting into the city a lot faster than expected, so we stopped by Stoddard’s for a drink. Well, Mal ordered a drink, and I kept him company. We saw Once at the Boston Opera House, and it was so good! I love the music so much, and it was awesome to hear it live. After Once, we headed to Back Deck for dinner. It was practically right next door to the Boston Opera House and it looked like a nice place, so we popped in. The food ended being a lot better than expected! It was like fancy barbecue. I ordered the Butternut Squash-Green Apple Soup and the Spicy Sausage with mashed potatoes and sautÃ©ed greens. Both were excellent! Mal ordered the pulled pork and also really loved his meal. On Sunday, Mal made us “Rise & Shiners,” which were a throwback to his days at UVM and the Kountry Kart Deli in Burlington, Vermont. We had everything to make them except the bulky roll, but they were still incredible. After breakfast, we headed to Open Gym for a quick workout. I made up a 3-round WOD to do, which took me a little less than 15 minutes to complete and included a lot of rests and a couple of water breaks. (I just wasn’t feeling it yesterday.) For the Cleans, I used 95 pounds, Wallballs 14 pounds, and Overhead Walking Lunges a 15-pound plate.

FYI: I tried three times to hoist the 30-pound medball up to the 9-foot target and never quite made it””all while the guys laughed at my goofy efforts to do so! Haha! After CrossFit, I snapped this belly pic! Halfway there! I can’t believe I’m already 20 weeks! It was a beautiful day and the temps hit the mid-to-upper 40s (you know you’re from New England when”¦), so Mal and I took Murphy to the dog park. It was such a nice day and the park was bumpin’ with people and puppies! Murphy was psyched to see so many dogs and do his pug mayor thing. When I was laying in bed last night, watching pug videos on YouTube (yes, really), I said to Mal: “There is nothing that I love more than pug puppies.” Of course, he immediately replied: “What about meeee?!” Haha! Of course, I love Mal and Murphy and my family and my friends more than pug puppies, but, other than that, there are very few things that make me as happy as they do””not even CrossFit or cake!

Besides your family and friends, what are some things that you love more than anything and every time you see/encounter them, they make you so, so happy, even then you’re in the worst mood ever?

P.S. Nikki‘s Coconut Butter is offering 15% off their entire store from now through Friday. Just use code ‘newyear‘ at checkout to receive your discount! Vanilla Cake Batter Coconut Butter… do it!!