The Reason Why I Always Want to Work Out 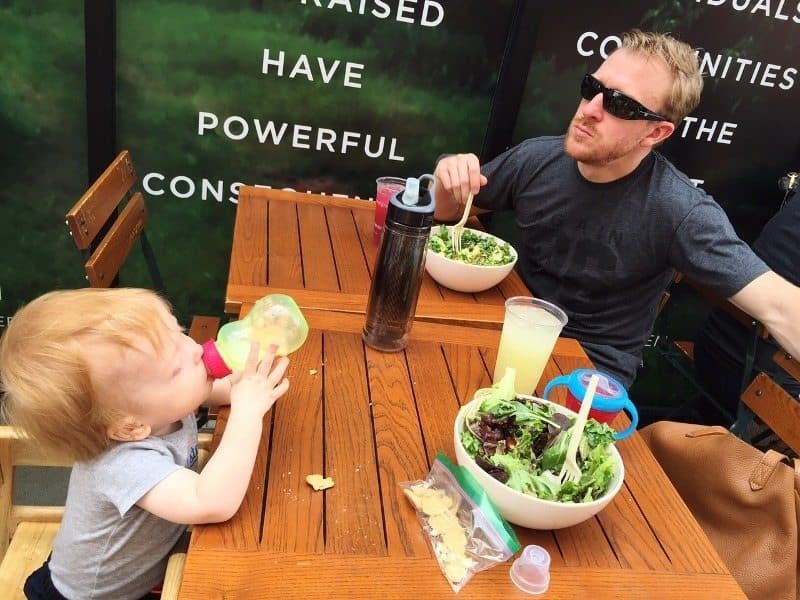 We had a nice, little Wednesday over here yesterday. It started bright and early with breakfast with my favorite boy. Mal and I take turns doing the “morning shift” (usually on the weekends, but now during the week since he’s off for the summer), so I let him sleep in. A couple of hours later, “Dada” woke up and helped us with the laundry, which he decided to throw all over Quinn. It was pretty funny, but we were trying to distract him from a potential tantrum. People, we’ve entered the tantrum phase. I hear they get worse before they get better. Oh, boy. Mid-morning, Quinn went down for his morning nap. (He’s mixing it up with either one or two naps nowadays, so we’re just going with it.) I did a little work and then my friend Kerrie picked me up to drive to SoulCycle together. Quinn bought me a gift card for my birthday, so I cashed it in yesterday. Well, the day before, because if you don’t hop on it and reserve a bike ASAP, you’ll probably not get into the class. Those SoulCycle people are dedicated. As always, it was an awesome class, and I loved everything about it… the music, the energy, the camaraderie, and especially the instructor, who was incredibly motivating. (I don’t think I’ve ever worked so hard in a spin class before!) She also said something that really resonated with me and it’s the reason why I always want to work out. She said: “Be grateful you have a body that works.” Her words were so simple and so true.

For those of you who have followed my journey with ulcerative colitis, you know how much I struggled to get well. Now that I’m (*knock on wood*) in remission (it still feels weird to type that), I am so, so, so grateful for a body that is healthy enough to allow me to do all of the things I love, especially exercise. So, as cheesy as this might sound, whenever you’re not in the mood to work out, remember to be grateful for a body that works and go sweat. And if that doesn’t work… think about all of the people who don’t have a body that works and would do anything to be in your shoes. Ok, I’m done. I had quite the moment at SoulCycle yesterday and just wanted to share. Plus, people ask me all the time what motivates to me exercise on a regular basis and this is it.

After class, I met up with Mal and Quinn for lunch at sweetgreen, which is one of my favorite restaurants ever. Their food is so fresh and so delicious. I wish I could go there everyday. (Kerrie had an appointment with a client, so she couldn’t stay.) I went with the Gucamole Green salad, which was organic mesclun with tomatoes, red onion, avocado, roasted chicken, fresh lime juice, and lime cilantro jalapeÃ±o vinaigrette. OMGYUM. I loved it and ate the entire thing. To drink, I ordered a cucumber-limeade… I think? I can’t remember exactly what it was, but I really liked it. Actually, I like all of the beverages at sweetgreen. After lunch, we checked out all of the nearby shrubbery and flowers because that’s what we do. And then we popped into Wegman’s because Mal had never been there before and wanted to see what it was all about since I’ve raved about it so many times in the past. (He had also never been to sweetgreen, so the nice cashier gave him a free drink!) Mal was thoroughly impressed with Wegman’s and we wandered around for a little while before getting distracted by the cookie case. Helllllo! Mal got some chocolate chip cookies, which he raved about for a solid 15 minutes after eating them, and I went with a frosted sugar cookie. It was awesome. What’s your reason for working out?