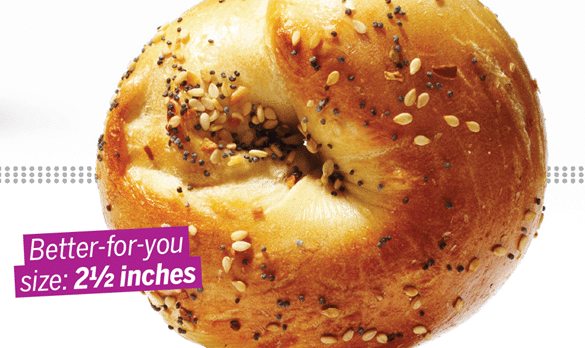 Let’s get right to the food, so I can answer the carb question that I’ve received a bunch from readers lately.

Last night’s dinner was a winner””definitely a keeper. We had Grilled Honey-Mustard Chicken with Arugula and Plum Salad. The dressing, in particular, was awesome, especially with a bite of both chicken and plum together. Delish. After dinner, I enjoyed some strawberries and a little bit of Justin’s Chocolate Hazelnut Butter straight from the jar. This morning, I made a wrap with cashew butter and banana slices inside. I also drank a glass of iced coffee with coconut-almond milk. As far as cutting carbs, I’ve definitely reduced the type of carbs in my diet. You’ve probably seen more starchy veggies and dairy, but less bread and oatmeal on CNC, right? Ok, let me explain why.

After Mal went to his Level 1 Certification for CrossFit, he came back with his mind totally blown. One of the first things he said to me was that we (him and me + Americans in general) eat too many carbs. I mean, think about what the USDA recommends we eat. As you can see, MyPlate is divided into sections of approximately 30% grains (carbs), 30% vegetables (carbs), 20% fruits (carbs) and 20% protein with a small servings of dairy (carbs) on the side. Do you see what I’m seeing? In theory, there’s nothing wrong with this recommendation, especially when you make half of your plate super nutritious fruits and veggies, but there’s no denying that our diets are carb-heavy.

Plus, growing up and living in the US, we’ve become accustomed to supersize everything, including food. Think about the size of a bagel. Most are the equivalent of six or seven slices of white bread [source: Fitness magazine, June 2012]. How crazy is that? Eating a “standard” size bagel means you’ve consumed nearly all of your recommend daily grains. Basically, what I’m trying to say is that I’m not specifically removing carbs from my diet (hello, I still drink beer and eat Pretzel Crisps),  but instead I’m aiming for a more balanced diet””one with more equal portions of protein, fat, and carbs. I know it might look like I’m eating a Paleo diet, but, as you probably know, I don’t do diets. I love food way too much to ever eliminate an entire food group, but I love how the Paleo diet emphasizes whole foods and a more balanced way of eating, which, of course, is what I’m all about””you know, carrots and cake.

Additionally, eating a more balanced diet makes me feel really good””both inside and out. I’ve noticed that I have more energy throughout the day, especially in the afternoon. I always used to “crash” after eating a carb-heavy lunch, but now I don’t experience that feeling as much. Additionally, eating this way (and reducing my sugar intake overall) has drastically improved my skin. I hardly have breakouts anymore, which is amazing since I’ve struggle with them my entire life.

Switching up the kinds of carbs that I consume hasn’t been difficult at all. Here are some simple carb-swaps that I’ve made recently:

What do you think? Do our diets include too many carbs?