The Best Christmas Yet 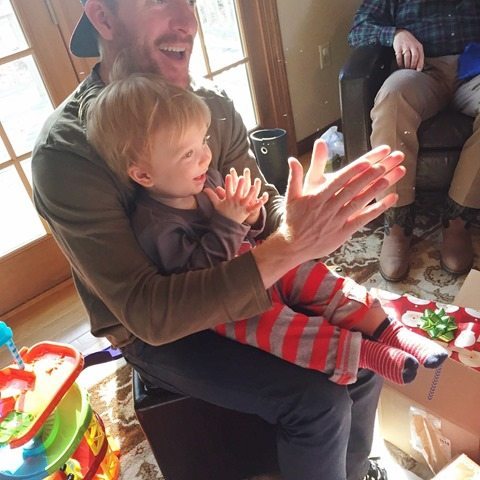 Heyyyyy! How was your Christmas? I hope it was wonderful in every way!

Our holiday was awesome. Seriously, it was probably my favorite Christmas yet. I truly loved everything about it and enjoying the holiday through the eyes of a toddler made it that much better and more special. Ok, let’s rewind to Christmas Eve!

Mal and I had a bunch of last-minute errands to run on Christmas Eve, so while we were out, we bought a glazed spiral ham to cook for dinner. Mal thought it would make a delicious meal, and it seemed like a great family tradition in the making, so I was totally on board! Mal is so smart. That night, we tracked Santa online to see when he’d arrive in Massachusetts. (Oh, how times have changed. Do you guys remember listening to the radio and watching the news on television for Santa updates? It was so exciting, right?!) And Quinn opened one of his presents from under the Christmas tree. (Opening a gift on Christmas Eve was a tradition in my house growing, so I wanted to pass it on to Quinn.) Hey, look who was inside! Quinn was psyched! After that, I read Quinn some books and put him to bed. (He took Rubble with him.) I don’t think he understood the Santa stuff, but Mal and I still had a blast playing the part. The next morning, we headed straight to the fireplace to see if Santa had come in the middle of the night. He did! And he left a very special present for Quinn! It was easily his favorite and he played with it forever on Christmas morning. In fact, Quinn played with it for so long, he didn’t open another present until a couple of hours later. Quinn actually finished opening all of his presents tonight because he loved everything he opened so much. I guess we really nailed it with his gifts this year?! The jumbo cardboard blocks were a huge hit! Mid-morning, my family (my mom, sister, brother-in-law, and nephew) and father-in-law arrived. My sister immediately gave Quinn his gift, which was an epic kitchen set. Matthew actually got the exact same one that morning, so he was especially excited to show Quinn what it was all about! Quinn enjoyed putting it together with Dada and Uncle Pat too! Quinn is sooooo into screwdrivers lately, so putting together the kitchen set was wicked cool! A little while later, it was time to eat. And, boy, was brunch deeeeelicious! We had so many winning recipes. The first was the Cinnamon Roll French Toast Bake that I blogged about the other day. It was so easy to make and turned out so well. I also made a Cheesy Tater Tot Breakfast Bake, which was phenomenal. You guys MUST make this recipe. It was gone by the end of the meal, so I made another batch last night for dinner. Yep, we loved it that much. My sister also made an incredible egg bake with ham, broccoli, and lots of cheesy sharp cheddar. Mmm! So good! Even though we had a nice spread for Christmas brunch, Quinn only ate a piece of bacon. Oh, well. We did manage to get a smoothie into him earlier that morning. And then it was time to open presents! Prior to Christmas, we all agreed that we weren’t going to go overboard with the gift-giving this year, but we still had quite a lot to open! We took turns opening presents (Mal bought me the best gift) and everyone had a grand old time together. Quinn loved watching other people open gifts as much as he liked opening his own! Quinn, of course, gave bird-themed gifts this year. For my mom: A big bag of bird seed. (She has a bunch of feeders at her house and enjoys watching the birds that visit.) And for my sister: A pink (and orange) bird ornament for her pink bird tree. Our family spent most of the afternoon at our house, just relaxing and catching up. Once everyone said goodbye, we hung out and enjoyed a lazy evening at home. All in all, it was a wonderful Christmas and one of my favorites yet!