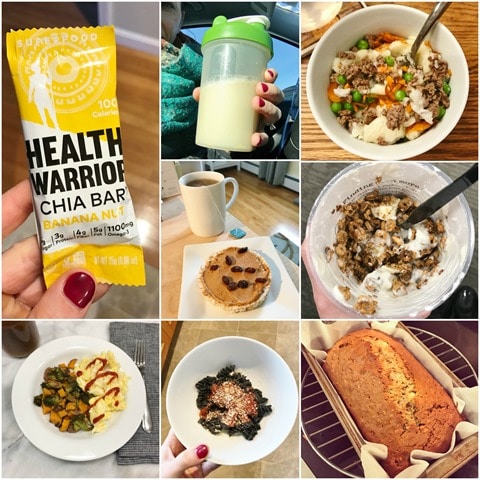 Heyyyyyyy! How’s it going? How’s week #2 of the new year going for you?

Here’s another double edition of Monday In Meals! I ended up snapping photos of my meals on Sunday, so I figured I would include them in my weekly Monday In Meals post, so now you can see what I ate on both days with, of course, a few fun family adventures thrown into the mix. Ok, here we go!

We got a pretty big snow storm on Saturday night, so we headed out after breakfast to play in the snow on Sunday morning. I’m usually not a cold weather person (even as a kid I didn’t love playing in the snow), but we all had such a fun time! Just wanted to give a quick shout out to Qman’s Cubbies shirt, which is the greatest invention ever. It’s a long-sleeve fleece shirt with mittens attached by zippers. It’s seriously the THE BEST, especially because Quinn likes to take off his mittens and then his hands get cold and he gets upset… yada yada. #toddlerlife You can easily zip the mittens on and off, but it’s the perfect way to keep them on (and not lose them). Cubbies are meant to be worn underneath a winter jacket or snowsuit, but you could totally wear it alone on a warmer winter day with a long-sleeve shirt underneath. If you’re interested in purchasing one, you can get FREE SHIPPING with code CNCFS. I mean, it’s only January. We have a lot of winter still ahead of us!! FYI: Qman owns the 3T size, which fits perfectly. Never miss a Monday! I got my sweat on at Salt Shack with a killer workout yesterday morning. This workout was suppose to be a sprint, and I was cruising along until I hit the Hang Squat Cleans, which, at 65 pounds, are not usually an issue for me, but my legs were not having it. I slowed down quite a bit, but I managed to pick things up for the second half of the workout. I finished strong (with Burpees!!) just over the 12 minute mark. After class, I took a quick shower at the gym and then hit the road for a doctor’s appointment. I packed lunch to go! Later that night, I made a comment about how we had some browning bananas that really needed to be used up, so Mal suggested baking banana bread. Best idea ever. We used the Famous Banana Bread recipe from Flour Bakery, which turned out so well! We’ll definitely make it again. Holy yum! Did you love playing in the snow as a kid? What about now?