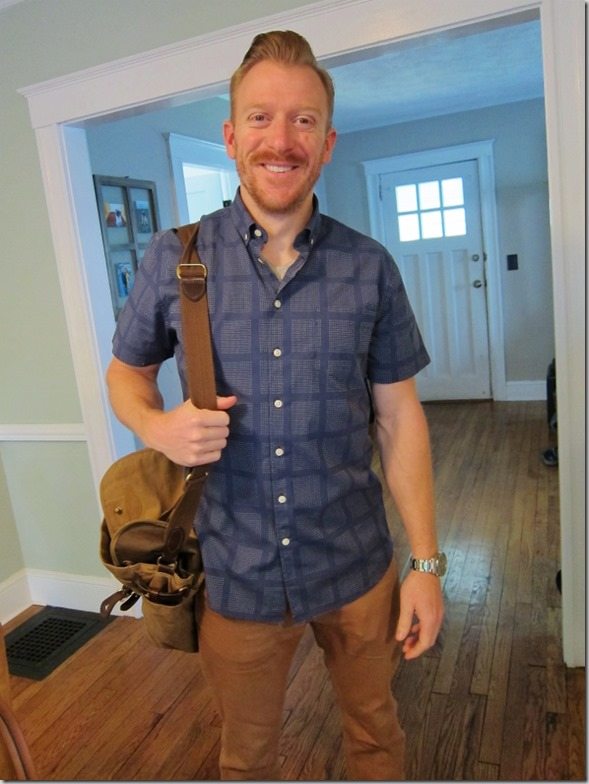 Hi, guys! Happy Tuesday! I hope your week is off to a fabulous start!

Some eats from today so far”¦

I’m still on a cinnamon bread kick for breakfast. This morning, I spread some almond butter on top and made a big glass of green juice on the side. This morning’s juice blend was honeydew melon, baby spinach, and mint””simple yet delicious! Midmorning, I started to get hungry, so I whipped up a quickie Creamsicle Smoothie with a little bit of vanilla protein powder in the mix before heading out to drive to my 38-week doctor’s appointment. After my appointment, I was starving and more than ready for lunch, so I made an egg, bacon, and cheese sandwich. It definitely hit the spot. I <3 egg sandwiches in a major way. So, I’m sure a lot of you guys have heard of Stitch Fix, right? I’ve raved about it on CNC a number of times in the past, and it’s all the rage in the blog world lately. But, did you know there’s a similar service for guys? Well, actually there are two that I know of”¦ well, that Mal knows of.

After Mal saw how much I loved Stitch Fix, he wanted to get on board with this whole clothing subscription box thing too, so he started researching online. He found Trunk Club and Frank & Oak’s Hunt Club. (<— Referral link for Mal, but if your man signs up, he gets a $25 credit!) Trunk Club sounds absolutely amazing, but it is expensive””like really expensive. We’re talking $200+ for a shirt. Mal loves nice clothing, but not that much. He eventually stumbled upon Hunt Club, which is a lot more affordable. Their tagline is “coolest trends under $50” to give you an idea. Hunt Club is a little different from Stitch Fix in that you actually get to select what is sent to you. You log into your account, do some online shopping to pick out the pieces you want to try, and then they are sent directly to you. Like Stitch Fix, you try them on at home, decide what you want to keep, and then send back what you don’t want. Easy as that! For his first Hunt Club “crate,” Mal picked two shirts and a pair of shorts. He liked the shorts, but they didn’t fit quite right (it seemed like they ran small) and one of the shirts he picked (below) was a little too “hipster” in person for him. Haha! He did, however, end up keeping the shirt below. Doesn’t he look handsome?! One out of three isn’t too bad, right? Mal thought Hunt Club was fun, and I’m pretty sure he’s going to do it again. He liked the variety in the clothing and how it encouraged him to try things that weren’t his usual style.

Do you get any subscription boxes? If so, which ones are your favorite?