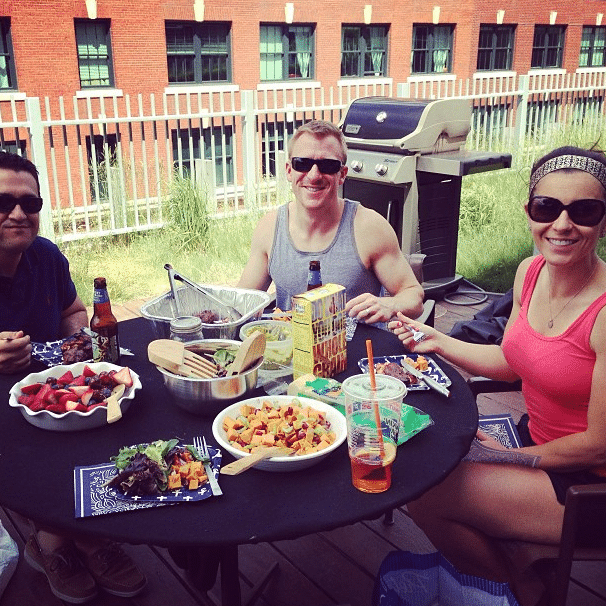 How was your weekend? Mine was really great””Saturday was pretty low-key, but Sunday was a lot more active. I don’t think I stopped moving all day yesterday!

I woke up Sunday morning and immediately headed to Open Gym at CrossFit to work on my rowing. The first workout of the team competition that I’m participating in later this month is an AMRAP 6 of Burpees and rowing. Each athlete completes a 500 meter row before doing as many Burpees as possible while their teammate rows. For each meter not completed in the row, your team is deducted 1 Burpee. The girl (me) rows first, so I wanted to make sure my rowing is up to par, so I had Mal critique my form and technique yesterday. He rowed crew in college, so he knows a few things about erging (indoor rowing). After a quickie workout at CrossFit, I headed to Secret Physique in Quincy to meet a couple of friends. The wife of one of our CrossFit guy friends was teaching, so we all decided to take her class together. The class was great””toning mixed with stretching””and the three of us were definitely challenged. All of those tiny movements burned so bad! We did “Pretzel” and my butt is so sore today! HA!

After class, we grabbed (coconut) iced coffees at Gunther Tooties, snagged a table outside, and chatted for awhile. Friends + iced coffee + sunshine = THE BEST. Eventually, I needed to say goodbye because Mal and I had plans to barbeque with Elizabeth and Nick at their condo. Yummmmmm! Nick grilled chicken and steak tips (OMG, teriyaki) and Elizabeth made a green salad as well as a cold sweet potato salad with red onions, celery, and dried cranberries””both were delicious. We also had some fresh berries for dessert, and Mal and I brought homemade guac and Angry Orchard ciders. There was so much good food! After BBQing, we headed inside to watching the Rich Froning-Dan Bailey-Central East CrossFit Regionals. Then, Mal and I helped Nick and Elizabeth finish a puzzle that was on their coffee table. It sounds kind of funny typing that””like, wow, super exciting Sunday afternoon””but I was really into it. I used to do puzzles all the time growing up (Mal made sure to make fun of me when I mentioned this yesterday), and I love the challenge. Once I start placing pieces, I can’t seem to stop. I mean, CrossFit was on TV, I was totally into the puzzle. HA! Late in the afternoon, we said goodbye to Elizabeth and Nick (and Clark) and headed home. We took Murphy for a walk and then headed to Mal’s softball game. (He plays in a summer league that started last week.) My friend Colleen’s husband plays on the same team as Mal, so we made plans to hang out and catch up while “watching” the game. I think we maybe watched 5 minutes of the entire thing. Colleen brought her dog, Diesel, so Murphy got in a little “puppy playtime” before we headed home. What do you think of puzzles? Obsessively fun or super boring?

Do you play in any summer sports leagues?

P.S. Shannon is hosting a virtual bake sale to benefit the Pass Mass Challenge! Click on over to see what delicious treats are up for grabs!