Well, we definitely got some snow overnight. Hello, Nemo! Check out what we woke up to this morning! As soon as we realized just how much snow there was outside, Mal immediately started to dig us out. I offered to do some of the shoveling, but he wouldn’t let me. He just said: “How about you make me breakfast? I want A LOT of pancakes.” Well, ok, then. I’d much rather stay inside and cook pancakes than shovel snow, so Mal definitely had a deal!

Murphy also isn’t a fan of the snow and would much rather stay inside than venture outside. Mal dug him some “pug paths” in the backyard, so he could do his business, but Murphy just wasn’t having it. 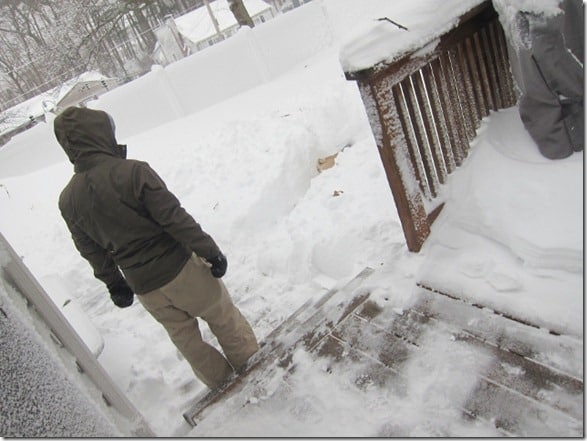 Needless to say, Murphy is not a fan of the snow. After I made Mal a huge stack of pancakes, I threw together breakfast for myself, which was Greek yogurt with fresh blueberries and some fresh fruit that I made in my new juicer from Bella Appliances. I’m planning to do a full review next week, so keep a look out for it. I’m really digging it so far! After breakfast, Mal did some more shoveling (we got about 2.5 feet of snow) while I cleaned the house. A couple of hours later, Mal was still outside shoveling, so I continued to do chores around the house. I felt bad he was outside busting his ass, so I just kept cleaning and cleaning. Our house is immaculate now! Haha! Meanwhile, Murphy snoozed on the couch. I don’t see him willingly going outside any time soon. Look at that bugged out face! Mine is fall, closely followed by summer and then spring.