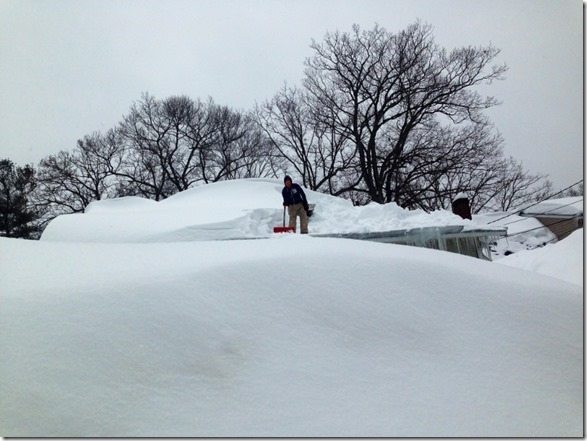 The governor declared a state of emergency and the National Guard was here in our town helping with snow removal yesterday. The snow banks are so high and parking lots are a total mess. There’s just nowhere to put it! And, not surprisingly, the schools in the area are worried about a number of safety issues related to the snow (i.e. kids waiting for the bus in the street since the sidewalks aren’t clear, potential structural issues because of heavy snow, emergency exits being blocked), so Mal is off for the rest of the week. Crazy, right? Five days in a row. I can’t remember a time either of us missed that much school due to snow. I’m telling ya, it’s snow madness here!

A little recap from the day”¦ Mid-morning snack: Chocolate-frosted donut. I mostly just ate the chocolate, which is obviously the best part. Workout: KFIT. Heavy thrusters (#95) + cardio sprints on the erg and bike + various strength moves. (The photo below is the parking lot behind KFIT. It’s basically just a huge mountain of snow!) Afternoon errands: Target, buying Dad a sub, and closing my bank account from my car loan, which I’ve been meaning to do since the summer. (The bank just happened to be right next door to the sub shop, and I can’t tell you how pumped I was to finally cross that off my list. I’ve moved it from one To Do list to the next for months now!) When we arrived home: Dad on the roof! Afternoon activities: Yay, snow! (I eventually helped Mal with the shoveling. I kept offering again and again, but he wouldn’t take my help until he was just OVER IT and finally handed me the shovel.) Selfie fun with my little peanut! Quinn’s Happiness Board for the day: The evening concluded with our heat crapping out. Hey, just what we needed when there’s 10 feet of snow on the ground! Mal and I (and Murphy) had a chilly night, but, thankfully, my office has electric heat, so we moved Quinn in there for the night. Our house was 52 degrees F when we woke up. Is it Spring yet?

What crazy thing happened at your high school (not necessarily weather-related, just something fun/interesting)?