Reader Question: Discouraged By Lack of Strength at CrossFit 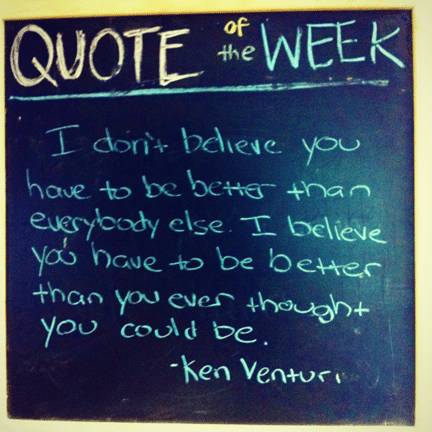 Hi, friends! How’s your Halloween going so far? Have you had any candy yet? I enjoyed a mini Twix with my Dandy Blend this morning and it was fabulous.

Yesterday was a rest day for me, so I took Murphy on a 2-mile walk around our neighborhood. When I got home, I snacked on some pistachios before dinner. Dinner was Paleo Pad Thai with chicken, broccoli, red bell pepper, onion, and scallions. Yum. I could seriously eat this meal once a week and never get sick of it. Best recipe ever. After dinner, I whipped up another batch of scary-weird sugar cookies to share with Mal for dessert. Oh, so good! Last week, I received an email from a reader, who just started CrossFit, about being discouraged by her lack of strength compared to the other people in her class. I feel like a lot of new CrossFitters experience these same feelings, so I wanted to share my reply on CNC.

First off, let me begin by saying I absolutely love your blog! I enjoy how you live your life with such a great balance of fun and fitness. Your entries on CrossFit finally motivated me to join a box and I have been a member for 6 weeks now. Similar to your fitness background, I have spent the majority of the last 5 years running and light strength training through BodyPump classes. Unfortunately, I have to say with the last couple of classes I have left feeling a bit down on myself.

I wouldn’t say I am an overly competitive person, but I do often compare myself to others. I am usually the girl with the lightest weight during the WOD. Yesterday for example, was my first workout that included snatches. I could only manage to do them with 31# while maintaining my form. Most of the girls in the class were busting out the WOD with the 75# Rx. Now, I realize some of these girls have been going for awhile, but others have only been there for 6 months or so. I just feel so weak compared to them!

Deep down, I know that I would rather work on my form and get the logistics right than try to push myself with the weight. I also know that I do excel at other things that some of the other girls struggle with such as Burpees, box jumps, sprints, etc. Even though I do try to remind myself of my strengths, I can get so discouraged with my lack of strength on the lifts.

I was just wondering if you experienced this at all when starting CrossFit, and if so, how long it took you to see improvements on your strength. I don’t expect to be Rxing with weight anytime soon, I just hope that in time, I will start feeling improvements in my strength.

Let me start off by saying that I am so glad you decided to try CrossFit!! It’s the greatest workout and it sounds like you are making some serious progress already. Doing Snatches with #31 after just 6 weeks is awesome! They’re a tough lift, and it’s great you’re focusing so much on proper form. You don’t want to get hurt!

When I first started CrossFit, my box was fairly new (only open for 2 months prior), so all of the people in my classes were newbies too, which made learning the various movements and lifts quite a bit easier, and there really wasn’t anyone to compare myself to. We were all in the same boat, so we made similar mistakes and had each other for support.

Fast-forward to 11 months later, our box is quite a bit different and there are tons of new faces. A number of the new members come from previous athletic backgrounds, so a few of them have had no problem picking up CrossFit and even Rx-ing the WODs after just a few months. Of course, I’d love to Rx the WODs too, but I’m not quite there yet with my fitness level. When it comes to CrossFit, having a competitive attitude is not a bad thing, but constantly comparing myself to other people is. I know comparison is the thief of joy and a serious energy-suck, so instead of getting discouraged by what other people can do, I use them as motivation. There’s a woman who joined our box this past summer. She’s a triathlete, totally buff, and always does the workouts faster and with more weight than me. Even if I don’t take a class with her, I look for her name on the white board as motivation for myself. If she did X, maybe I can do Y. Same goes for my running buddy, Kerrie. She’s wicked fast, so I always look for her name on the whiteboard and try to beat her time. (And I know she does the same thing with my times!) Of course, it’s a friendly competition and we push each other to get faster. And if Kerrie beats me in a WOD, I think about her time/weight as something to strive for the next time.

I think it’s also important to remember that everyone was a beginner at some point and some people just have more natural athletic ability. Mal is a perfect example of this. He’s a really great runner and ran his first marathon in 3:15 by only doing the long training runs on the weekends. When it comes to CrossFit, he excels at running and rowing (he rowed in college), but he’s not the biggest guy, so he doesn’t put up a ton of weight. This used to bug him, but he knows he’s really strong at other kinds of workouts. During metcons, for instance, Mal is always the guy to beat and he often gets the fastest times and he’s proud of that. He continues to work on improving his strength and a lot of his focus/training goes into making those gains.

As far as seeing improvements in my own strength, it definitely took some time– and I’m still not Rx-ing workouts! It’s been nearly 11 months since my first CrossFit workout, and I still do plenty of Level 1 and Level 2 WODs. And if I do a workout as prescribed, it’s not one with heavy lifts. Usually, it involves running or some other unweighted exercise or skill, which is totally okay. I know I’ll eventually get stronger. The beauty of CrossFit is that the intensity of the workouts is all relative. Everyone’s heaviest possible weight is different, but if you scale properly, you’ll feel the same way at the end of the workout as someone who just Rx-ed the WOD. Basically, you’re still getting an amazing workout even if you’re not doing it as prescribed.

With that said, hang in there and keep on truckin’. If you attend regular classes and continue to scale the workouts properly, you’ll see progress. Be patient and sets goals for yourself. I keep a notebook at CrossFit with all of my weights, times, scores, etc., and use it as a way to track my progress, which is constant motivation to become a better athlete.

Do you compare yourself to others when it comes to your fitness endeavors? If so, do you see it as motivation or as something else?

P.S. CrossFit fans: Julie Foucher recently announced her plans for the 2013 CrossFit Games in a post on her blog. She also gives some great advice for achieving balance.