Put Your Heart Into It and Dance Like Crazy 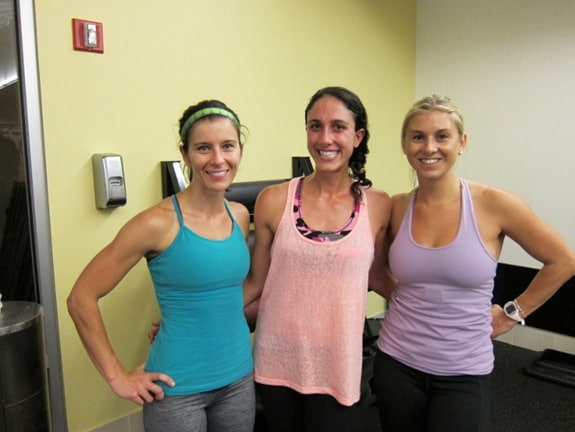 I’ve partnered with Harvard Pilgrim on this sponsored post, but the thoughts and opinions expressed are my own. You can find more ways to be well at HarvardPilgrim.org/CountUsIn.

A couple of months ago, Harvard Pilgrim contacted me to see if I’d be interested in working with them on their “Well-Together Challenge,” a month-long challenge where two bloggers with different backgrounds (e.g. a runner and yoga instructor) are matched up to encourage one another to try new things. It sounded like a neat opportunity, and I’m always on board for something new, so I immediately signed on. I was paired with my blog buddy Sarah, so the two of us will each be blogging about our experiences on our individual blogs over the next four weeks.

When Sarah and I were first matched up for this project, we emailed one another a bunch of potential ideas. We’re both really into fitness, so it wasn’t a surprise that our lists included lots of classes and workouts that we wanted to try. On my list was Zumba. My old gym offered Zumba classes, but I never went to one. It always looked like a fun way to workout, but I always chose Body Pump or running on the treadmill instead.

Sarah knows an awesome instructor who teaches Zumba at Equinox, so she suggested we take her class for our first session together. Lauren Hefez, the instructor, was absolutely amazing and totally made the class! Sarah and I arrived just a couple of minutes before Lauren started class, so we snagged a couple of spots in the back, which was totally fine with me since I had never done Zumba before. Lauren got right into the workout with a moderate paced warm-up and then continued to pick up the intensity for the rest of the 45-minute class. Each song had a slightly different feel to it with regard to the music and choreography, so it was almost like a bunch of mini workouts in one class, which definitely held my interest and made the time fly by.

For each song, Lauren would demonstrate a few new dance moves for us to do and then we’d repeat them over and over again. Once we got the hang of it, Lauren would then add some more moves until we had a few short routines that we could string together. Most of her choreography was modern, hip hop-inspired, and a little funky with lots of jumps and plyometrics mixed in to boost our heart rate and caloric burn. When a new song came on, we had about 10 seconds to catch our breath before starting again with a whole new series of dance moves and routines. During the first 10-15 minutes of class, I focused a lot of my attention on choreography and properly doing each and every move, which, not surprisingly, turned me into an even more awkward dancer. Instead of just having fun, I felt totally self-conscious and worried about my ability to keep up with the rest of the class. I really loved the music””Rihanna, David Guetta, and Lady Gaga just to name a few””but I kept getting stuck on the tiny details of the choreography.

When the third or forth song of the class started to play, Lauren yelled: “Put your heart into it and dance like crazy” to motivate us. She was a ball of energy and just wanted everyone to have fun, so I started to loosen up and not focus so much on perfectly performing every routine. There were a lot of great dancers in the class, but there were also plenty of people, just like me, who didn’t know what the heck they were doing. Once I realized everyone was there to just have fun and get their body moving, I relaxed and really got into it.

As the class progressed, I started to get the hang of the choreography too. Lauren introduced new dance moves and then repeated them multiple times over and over again, so it started to get easier to anticipate the choreography changes and remember the routines. After class, I asked Lauren if each song is choreographed from beginning to end, and she said for the most part they are, but she knows all of the songs she plays by heart, so she’ll improvise when inspired. Being familiar with the songs also helped me feel out the choreography. I could see how attending regular Zumba classes would make this easier too.

As far as getting a good workout, I’m surprised how intense Zumba can be. It’s definitely one of those workouts where you get what you put into it. If you kick your own butt and don’t stop moving, you’ll get a serious heart-pumping sweat session. (FYI: Sarah wore her heart-rate monitor during class and burned 417 calories in 45-minutes!) It also helped that Lauren was such an energetic instructor. She cheered us on and danced around the room the entire time, so even if you felt sort of blah and lazy coming into class, there was no way you’d stay that way for long. Her energy was contagious! Lauren also gave us a bunch of challenging variations for the choreography, so if you really wanted to push yourself, you had the option. Before I knew it, class was winding down, and I have to admit, I was kind of bummed. When I first realized class was only 45 minutes, I was thankful it wasn’t a full whole hour, but once I started shaking my tail feather, I didn’t want it to end. I wanted to keep dancing! I honestly never thought I’d love Zumba as much as I did. Sure, I wanted to try something new, but I never thought I’d have so much fun and get such a great workout at the same time. I had a blast a Zumba, and I’m so glad I had the chance to try it.

Have you ever tried Zumba? If so, what’d you think?