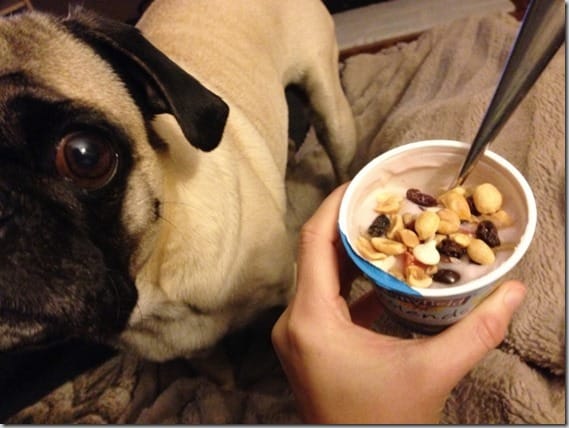 It was a gorgeous day in downtown Boston yesterday! It was a little chilly, but beautiful and sunny at the same time. My doctor’s appointment went well. It was short and sweet like I expected. My doctor wants to wean me off the Uceris over the next few weeks, which, truthfully, I am really worried about. I have had ZERO success weaning off steroids in the past, so I’m really trusting my doctor and hoping for the best. It was just about lunchtime when I got out of my appointment, so I headed to Whole Foods for lunch. The Charles River Plaza location is one of my favorite Whole Foods because their salad and hot bars are incredible. There are sooooo many options! I had a blast picking and choosing a little bit of everything for lunch. (Of course, I had to get a piece of Whole Foods bacon. Obsessed.) After lunch, I headed over to Starbucks to meet Chad and Lindsay! It was so nice meeting them, and we had all sorts of things to talk about. As you probably remember, Chad has had a challenging journey to health, but he’s improving every day. His doctors even think he’ll be home by Thanksgiving! After spending some time with Chad and Lindsay, I headed home. It was almost time for CrossFit, so I changed into my gear and then made a quick snack of spaghetti squash mixed with white cheddar cheese from The Laughing Cow. Yum! I am an official brand advocate for Bel Brands in 2013. While I receive compensation for participation as a brand advocate, opinions are my own.

Yesterday’s WOD was a lot of fun. We basically went all out on 3 different exercises (Kettlebell swings, Burpees, and Sumo Deadlift High Pulls) for short 30-second bursts with 20 seconds of rest in between. After we completed each exercise, we recorded how many reps we did and then repeated this for 5 rounds. The goal was to keep up the intensity and do the same number of reps as the workout progressed and your body got more and more tired. It was definitely a challenge!

Mal was right next to me during this WOD, so I tried to keep up with him. He was a little faster than me on the Kettlebell swings and Sumo Deadlift High Pulls, but he pretty much smoked me on the Burpees (he consistently completed 12-13 reps in 30 seconds!), but, in the end, he only beat by 14 reps on this workout. He got 215; I got 201. I’ll take it. After CrossFit, I came home, showered, and threw together a quick dinner. The spaghetti squash was already cooked and the meatballs were from Whole Foods, so all I had to do was add some marinara sauce, grated Parmesan and dinner was done! A couple of hours later, I started to get hungry again, but Murphy was asleep on my lap, and I didn’t want to upset him, which is actually a “rule” in our house. If one of us has the pug laying on our lap, the other person has to do whatever is asked of them because we don’t want to disturb Murphy. (I had this rule growing up too, but it was all about “not upsetting the cats.”)

With Murphy on my lap, I couldn’t get up to get myself a snack, so I asked Mal to grab me a yogurt with a little bit of trail mix in it. As soon as he handed it to me, Murphy made sure he was nice and close to the food action. Do you have a “don’t upset the pet rule” in your house or are we just living in Murphy’s world?

P.S. Back on My Feet launched its 11th chapter in Los Angeles last week!