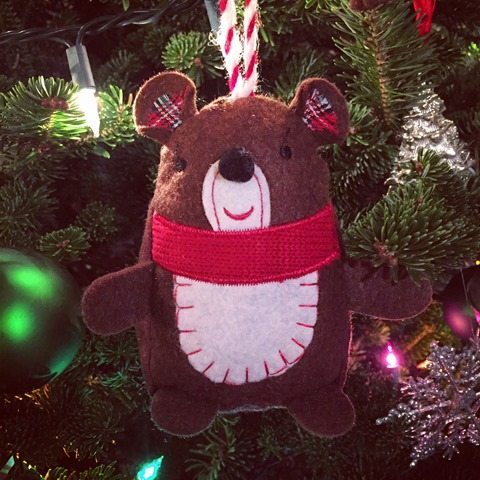 First things first: In nearly 8 years of blogging, I’ve used this same post title 4 times now. Four times! That’s kind of a lot, so, apparently, we’re playing catch-up quite a lot over here. Haha! I thought it might be fun to take a little trip down memory lane and share the 3 posts where I previously used this title:

Well, that was fun.

So. Seriously. Where did the last few weeks go?! I feel like I’m behind on life lately and soooo not ready for Christmas. I still have presents to buy! Quite a few presents to buy! At one point, I was actually ahead of the game with shopping, but not anymore. Gah! How is Christmas just two days away!?

Anyway, since it’s the title of this blog post and all, let’s play a little catch-up. First with a few photos from yesterday and then a short recap of 24 Days of Togetherness.

We started our day like most: Milk (for Quinn) + iced coffee (for me) on the couch with some snuggles and Paw Patrol. I get a lot of questions about Quinn’s sippy cups and the ones that we like best are the Lollacups. It’s an expensive sippy cup ($16), but it’s the only one that REALLY doesn’t leak. I’ve purchased probably a dozen different (cheaper) sippy cups, and I’m always annoyed with them… and myself because I wasted money. I finally learned my lesson and purchased two more Lollacups to add to our collection, and we couldn’t be happier with them.

Yesterday’s breakfast was an oldie but goodie: Oats in Jar. Yummm! (Oats in a Jar Tutorial here. Cliff notes: Please don’t pour your hot oatmeal into a plastic nut butter jar. The end.) And, of course, once I finished my OIAJ, Murphy got to lick the jar. (He’s still spoiled.) The weather was unseasonably warm again yesterday, so we took Murphy for a long walk. Quinn’s new winter coat reminds me of “fat guy in a little coat,” but just the opposite: “little guy in a fat coat.” It’s so darn puffy! Haha! That afternoon, Quinn chowed down on some Annie’s Cheddar Bunnies, which was a nice surprise since he hardly eats… just smoothies and milk and the occasional piece of bread/bagel/pancake. We have an appointment with his pediatrician today as well as an Otolaryngologist after the holidays, so, hopefully, we’ll figure out what’s going on. Poor peanut. And onto a recap of our 24 Days of Togetherness! This was so cute. Quinn pointed to a Cat in the Hat ornament, so Mal brought it over to him and he immediately tapped the top of his head and gave us the biggest smile. I guess he thought the cat’s hat was pretty cool! Quinn showed an interest in a bunch of stuffed ornaments, so we picked out three and asked him to choose one. He liked the bear. Great choice! Mine (some were similar to Mal’s, so I came up with different ones): It was 55 degrees and much too warm for a fire, so we watched the Yule Log for a little while. After Quinn’s appointment, we’re meeting Mal for dinner at one of our favorite restaurants. I think we originally planned a date night for just Mal and me, but a family dinner instead makes a lot more sense.

And tomorrow, Day 24 and the final day of 24 Days of Togetherness, is take the boys on a “nature walk,” so we’re planning to go to Bare Cove Park tomorrow afternoon.

A big thanks to everyone who entered the Brooks Stocking Stuffer giveaway! Here is your winner:

Congrats, Tiffany! Please email me with your size and color preferences for the gloves and headband as well as your mailing address.

Are you ready for Christmas? Do you still have shopping to do?