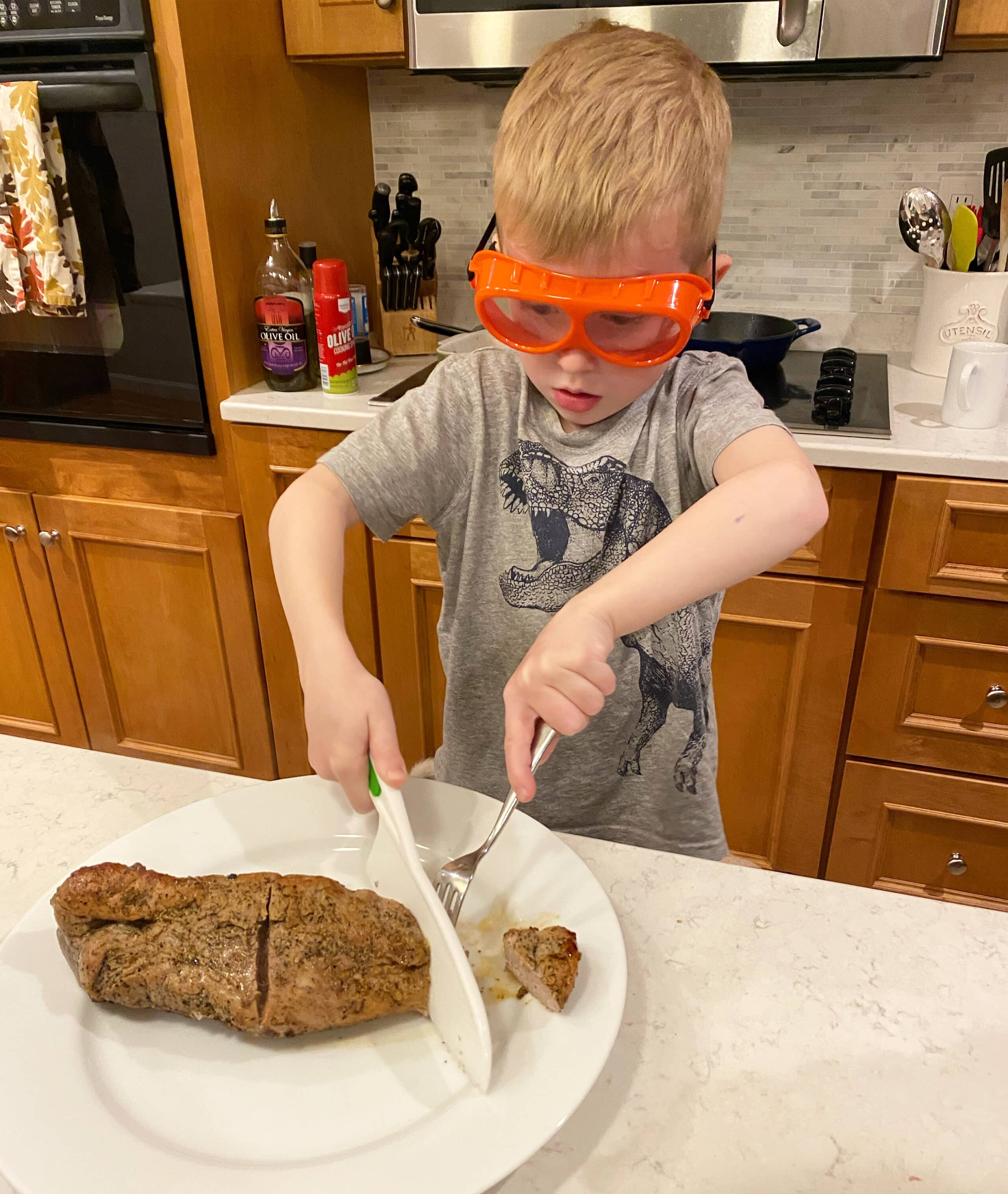 Hey there! I have some picky eater tactics that work coming at ya!

So I wanted to talk about Quinn and his eating habits and give you a little update. You might remember, he was (is) a very picky eater. We went through all sorts of struggles over the years to get him to eat and, at times, he would go on “hunger strikes” for days and days and eat nothing. It was so stressful as parents.

More recently, Quinn has made a ton of progress, and you might have seen him on Instagram Stories making guacamole, pork tenderloin, and sucking down oysters. I get so many comments and questions from followers saying that he’s such a great eater and asking how did he get to this point? Well… I want to come clean with you guys about really what’s going on.

So we’re still struggling. In fact, we were really, really struggling. Quinn went through a phase not too long ago where he just wasn’t eating. He would go (5-7) days in a row where he would barely eat anything… maybe half a waffle in the morning and then have a bite (yes, 1 bite) of something for lunch and then maybe drink a cup of milk for dinner and that was it. He just wasn’t eating. 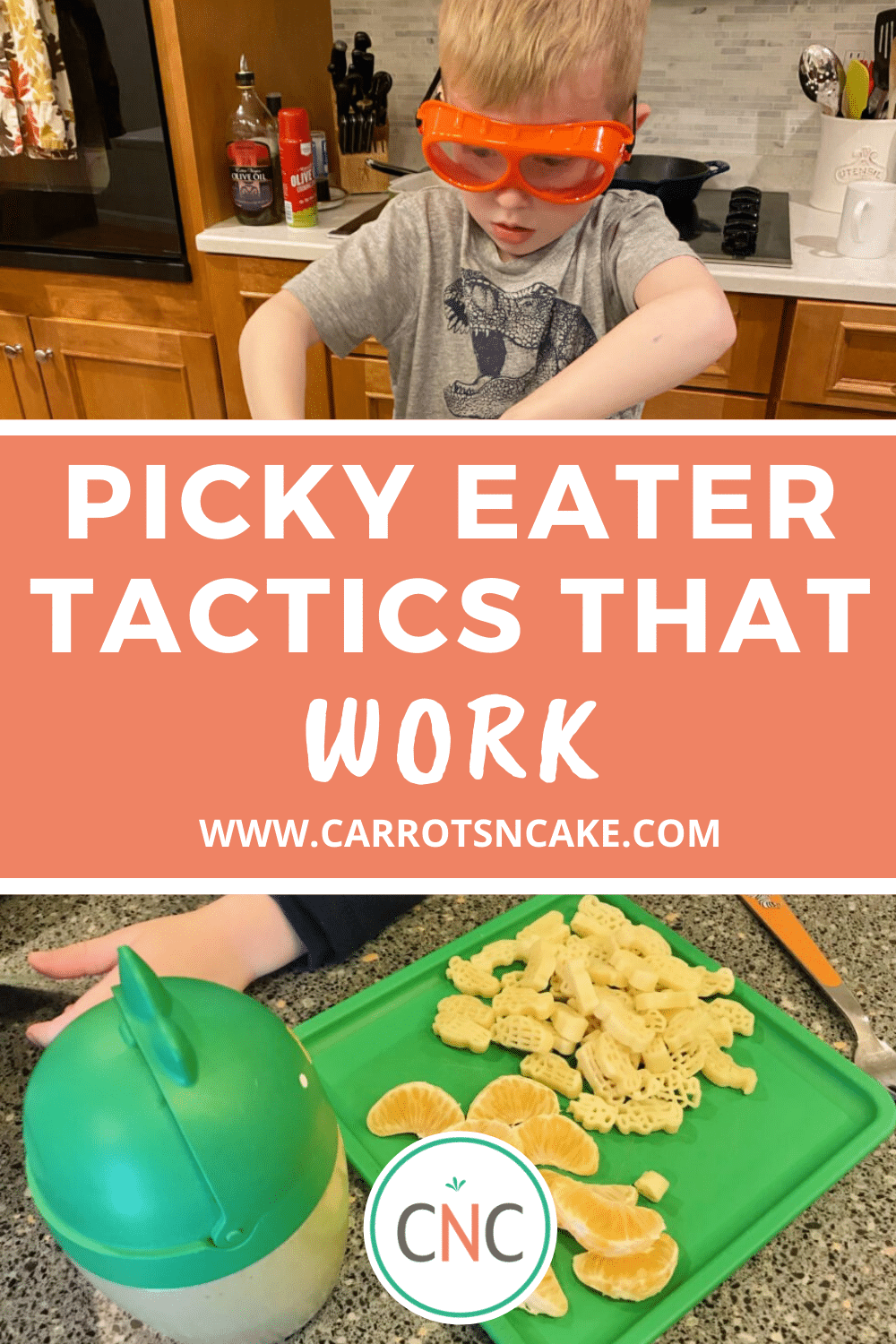 Mal and I were getting nervous because Quinn was losing weight, and he started to eat fewer and fewer foods. He had started eating potatoes, rice, and hot dogs, but those all went by the wayside. He was pretty much living off bites crackers, fruit, and milk. So, I reached out to Lindsay from The Lean Green Bean. She’s a Registered Dietitian and has 3 kids of her own. She referred me to Kacie from Mama Knows Nutrition, who is also a Registered Dietitian and solely works with kids. (She also has an amazing Dinnertime Survival Guide – details below!)

I reached out to Kacie and set up a call with her. (She’s actually an old school CNC reader!) Mal and I talked to her for about an hour. We told her what was going on, and she gave us some amazing advice that I thought some of your might benefit from as well. If your child is going through something similar, I highly recommend Kacie. She was so helpful!

Mal and I definitely threw a lot of tough questions at Kacie. Tough in the sense that they were very specific questions and individual to our situation. Kacie answered them all and gave us so many great ideas. We’ve implemented pretty much all her suggestions, and things have gotten better over the course of just a few weeks. Quinn is (mostly) eating again, and he’s gained a little bit of weight. I really feel like we’ve turned things around. Things aren’t perfect, but we’ve definitely seen some improvements overall!

Ok, so here are some of the things that really resonated with us. Hopefully, they help you too because being the parent of a picky eater can be really stressful, especially if it’s an ongoing struggle.

The biggest takeaway for us was making mealtimes a no-pressure situation. Mal and I were always encouraging Quinn to eat, and it probably came off as pushy and stressful for him. Looking back, we were always pressuring him to eat. And just being a five-year-old (or toddler), there was a lot of resistance. Basically, stressful situation +  “I’m not going to eat because you’re telling me to eat” was a bad combo.

So now, when we sit down for meals with Quinn, we don’t say a word to him. We serve his food, we talk about our days, and don’t encourage him to eat. And it’s really made a difference! I mean, thinking back to his love for oysters… we often go out for oysters as a family. It’s definitely a fun family event, but Mal and I have never encouraged Quinn to eat oysters because most kids (and some adults) don’t like them. But he tried them on his own and now loves them. Quinn saw us enjoying oysters so much, he wanted to try them for himself. And now, the kid will suck down more than half dozen oysters on his own!

Related to this… instead of pressuring your child to eat, only talk about how much YOU enjoy the food. So if there’s a new dish on the table, make it a point to say how delicious it is and how much you like it. If they’re curious, maybe they’ll try it. Maybe not, but you need to let them come around in their own time. And this brings me to the “division of responsibility” at meal time.

Division of responsibility = parents decide what and when the child will eat. The child decides how much and whether they’re going to eat or not. This was huge for us. Now, it’s much easier to know that we are doing our job as parents and preparing healthy foods for Quinn and then it’s up to him if he wants to eat or not.

Some specifics around the division of responsibility that were really helpful:

1) Parents decide what’s for dinner. We used to ask Quinn, “Hey do you want pizza or pasta for dinner?” Now we pick what he’s going to eat. We give him a few options we know he’ll eat + some shared dishes for the table, so he can serve himself (or not).

2) Involve child in meal planning. When you’re making your grocery list and planning your meals for the week, ask your child what he/she wants to eat that week. They won’t dictate when these foods are served, but they’re part of the planning process, which gives them some control over the choices available. Ultimately, as the parent, you decide what to serve them.

Another great suggestion was cooking with kids, which we already do quite a lot with Quinn. Quinn won’t usually eat what he helps us make (i.e. pork tenderloin) despite being involved in the entire cooking process, but Kacie pointed out that the real success is having a positive food experience. And again, she reminded us that kids will come around to trying new foods on their own time. Realizing this was really helpful as well. 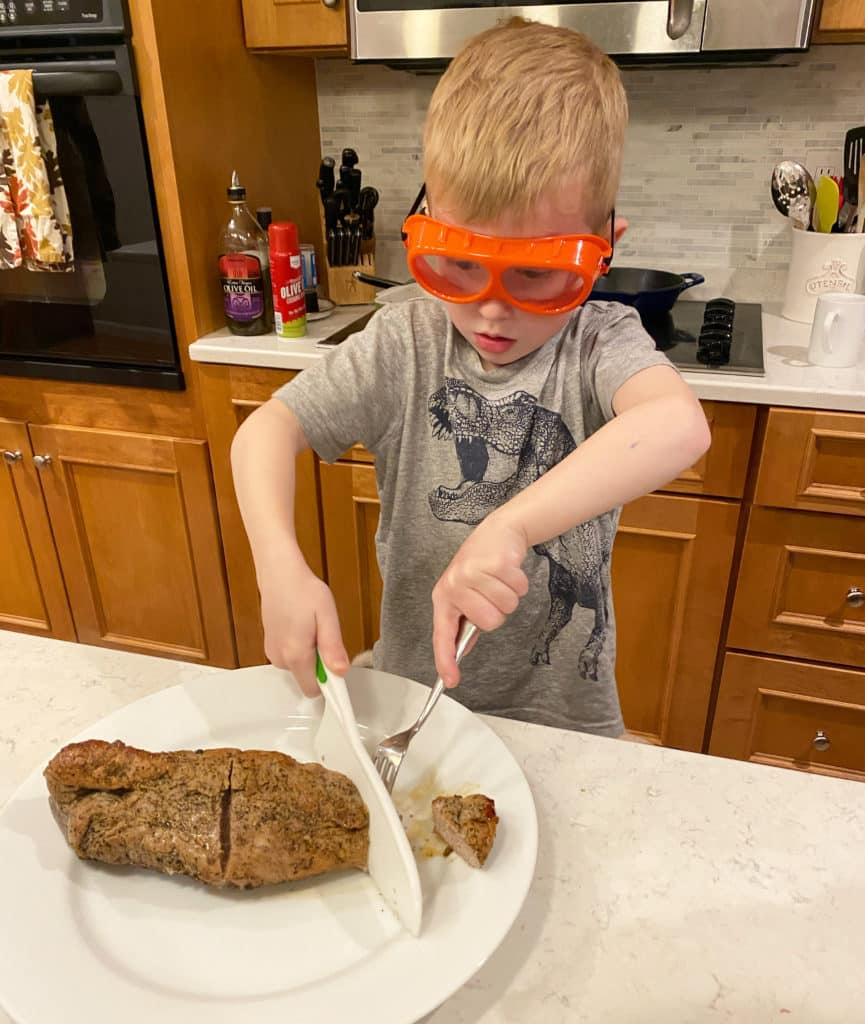 Snacking on junk was another issue for us. Quinn would often not eat at breakfast, lunch, or dinner, but then an hour later tell us he was hungry. (No kidding!) Mal and I have had a variety of professionals (i.e. doctors, nurses) tell us that if Quinn doesn’t eat dinner, for example, he should go to bed hungry. I would ALWAYS feel so bad about this, but Mal was a stickler for the “rule,” hoping that Quinn would eventually learn to eat his dinner. This went on for a long time without change, so we asked Kacie about it.

Kacie said snacks, especially bedtime snacks, are totally fine. Kids are typically sleeping 10 to 12 hours at night and not getting any sort of calories during that time, so it’s okay to have a snack before bed. So now, even if Quinn hasn’t eaten dinner, we offer him a snack before bed. We’ll offer two snacks, and he’ll pick what he wants to eat. This has been a game changer, and I feel so much better sending him to bed with something in his belly!

Also, related to snacks was creating “eating windows,” so kids aren’t just aimlessly snacking all day long. So if Quinn doesn’t eat breakfast, he has to wait until the next “eating window” to have a snack. (He’d often not eat breakfast and then 30 minutes later ask for a snack.) Again, you will ultimately make the decision what your child will eat, but give them choices (i.e. yogurt or an apple).

We also ran into Quinn wanting junky snacks, which, of course, we just *shouldn’t* have in the house, but that’s not our style. 😉 We like cookies and chips, and we’re not going to tell Quinn he can’t have them if we’re eating them ourselves. Kacie was totally okay with “fun” snacks, but she recommended serving them WITH a meal. So, for example, if Quinn wants Pringles, he can have them with his lunch.

So that’s all I got. I hope you guys found this helpful. And, of course, if you’re struggling with a picky eater, I highly recommend reaching out to Kacie. I can’t say enough about how helpful her ideas were to us, and they are absolutely picky eater ideas that work!

Additionally, if you want some help with mealtimes, Kacie has an awesome Dinnertime Survival Guide that includes a 6-week meal plan with healthy, kid-friendly dinners for Monday through Friday. There are 30 meals, all that you can make in about 15 minutes each, start to finish. 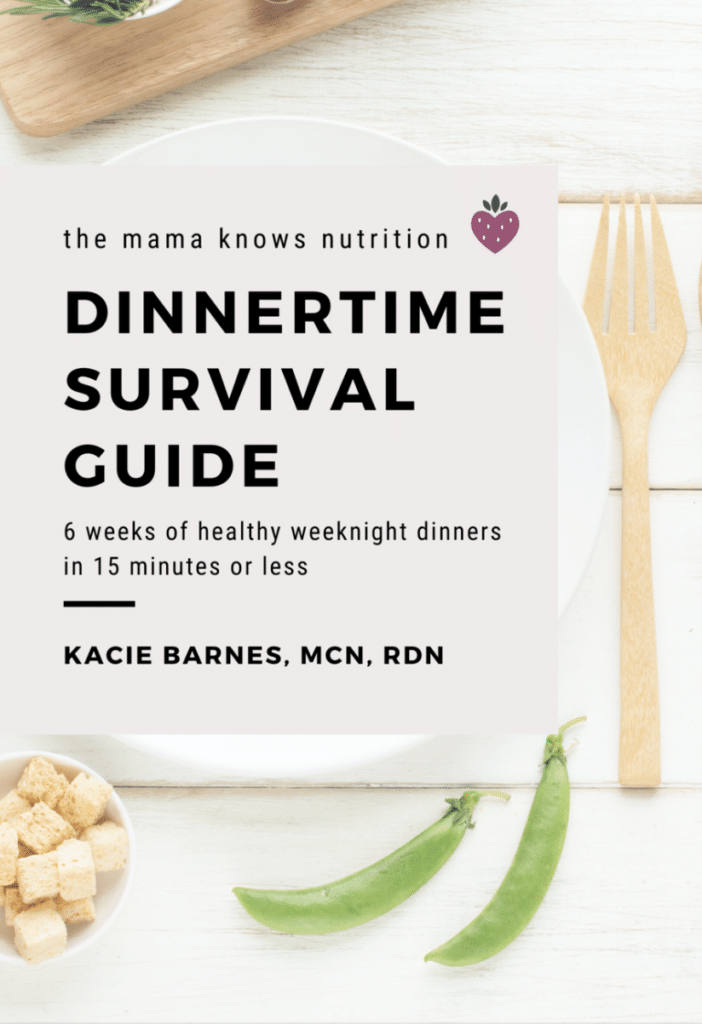 Each week has a visual meal plan, including images of the ingredients to buy (so you can easily use it as a grocery list) with the recipes. There’s also product recommends of her favorite top choices for convenience foods. We’ve gotten a bunch of great meal ideas from it. It’s definitely worth checking out if you have kids and want to make meal time easier!

Start your macro journey now with my Getting Started with Macros Guide and 40-30-30 Weight Loss Meal Plan.

Join my Macro Bootcamp for 5 days of FREE macro education! 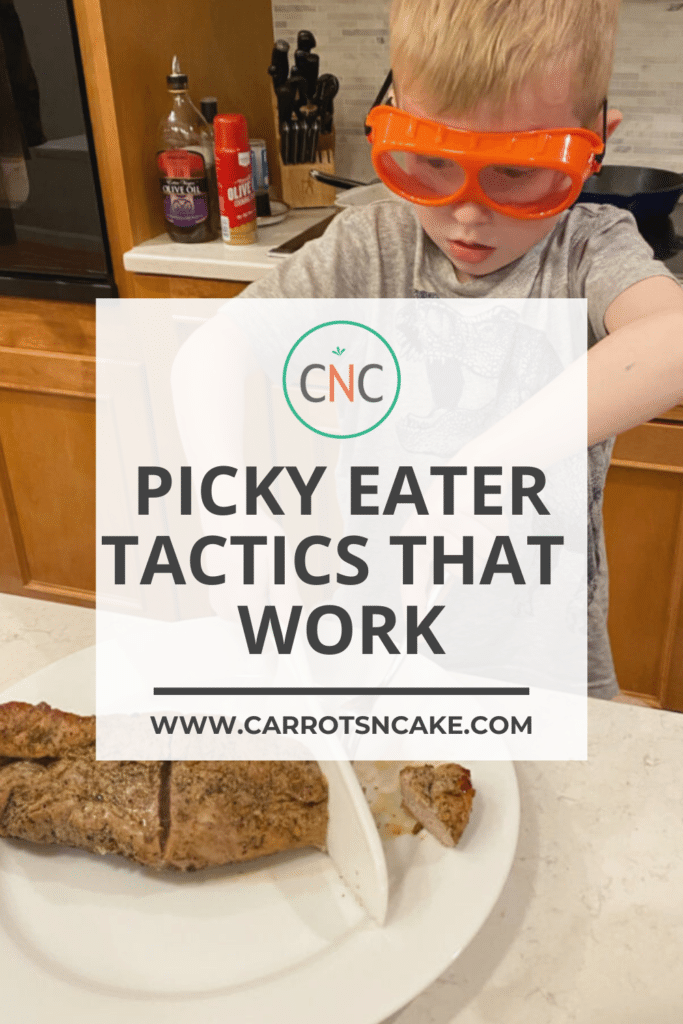