Photos I Send to People II 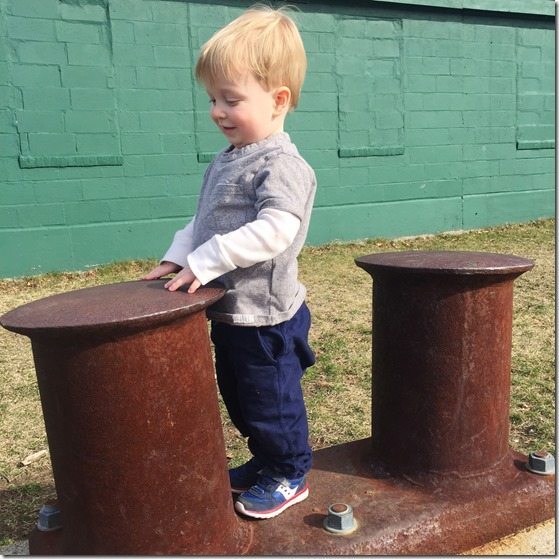 I’m so glad you guys liked my first edition of Photos I Send to People! It was a fun blog post to write, and I know there will be plenty more in the future. That said, here’s the second post of the series! To: Mal
What: A photo of Quinn playing at Bare Cove Park.
Why: He was being so adorable, I just had to share the pic with Mal. To: Marisa
What: A photo of the Stil Studio schedule… from 2015, which I didn’t realize until after I sent it to her.
Why: I recently received a few free passes, so I asked her if she wanted to go to a class soon. To: Mal
What: A photo of Quinn and me during our first stroller run of the year.
Why: He asked for a #quinnpic while we were running, and I definitely needed a break, so I stopped a snapped one. Stroller running is no joke, people!! (FYI: We have the Chicco TRE and love it!) To: Mal
What: A photo of Quinn opening our fridge!
Why: Because how did our baby get so tall?! To: Monica
What: A photo of a hand towel that I saw at a local coffeeshop.
Why: She appreciates a good food pun as much as I do! To: Mal
What: A photo of my gel manicure.
Why: After my mani date with Marisa, I texted Mal to see if he wanted an iced coffee or donut from the nearby coffeeshop. He asked how my nails turned out, so I sent him this pic. To: My sister
What: A picture of our new Little Green Pouches.
Why: The company recent gave me some to try out, so I sent a photo to say that we really liked them and she should get some too! To: Mal
What: A photo of the Panzanella recipe from our Eating Clean cookbook.
Why: He asked what was for dinner, so I sent him this photo. (FYI: The Panzanella was sooooo good! The croutons were especially incredible!) To: Mal
What: A photo of some “last call” Lost & Found shakers at Salt Shack.
Why: I thought I recognized his shaker, so I sent him a pic and asked him if it was his. (It was!) To: My sister
What: A screenshot of a re-purposed Pack ‘N’ Play on Facebook.
Why: I thought it was such a great idea and thought she would think so too! To: Mal
What: A photo of Quinn pointing at birds.
Why: We went to visit the cows at Hornstra Farm, but, not surprisingly, Quinn was way more into the birds, so I sent a photo to show Mal. To: Monica
What: A photo of Murphy and me.
Why: She sent me a selfie, so I sent her one back. To: Marisa
What: A recipe for my 4-Ingredient Blondie for One.
Why: We were talking about healthy-ish desserts recently, so I sent her this one to try. To: Mal
What: A photo of Quinn playing with Murphy’s leash and a random toy that I found in my bag. #momwin
Why: Murphy recently hurt his tail (we have no idea how, but he’s lost his curl and it’s really sad), and we were waiting for the vet to come examine him. To: Mal
What: Quinn shuffling around the house in his Nanos.
Why: It was really cute!

Your turn! What’s the last photo that you sent to someone?