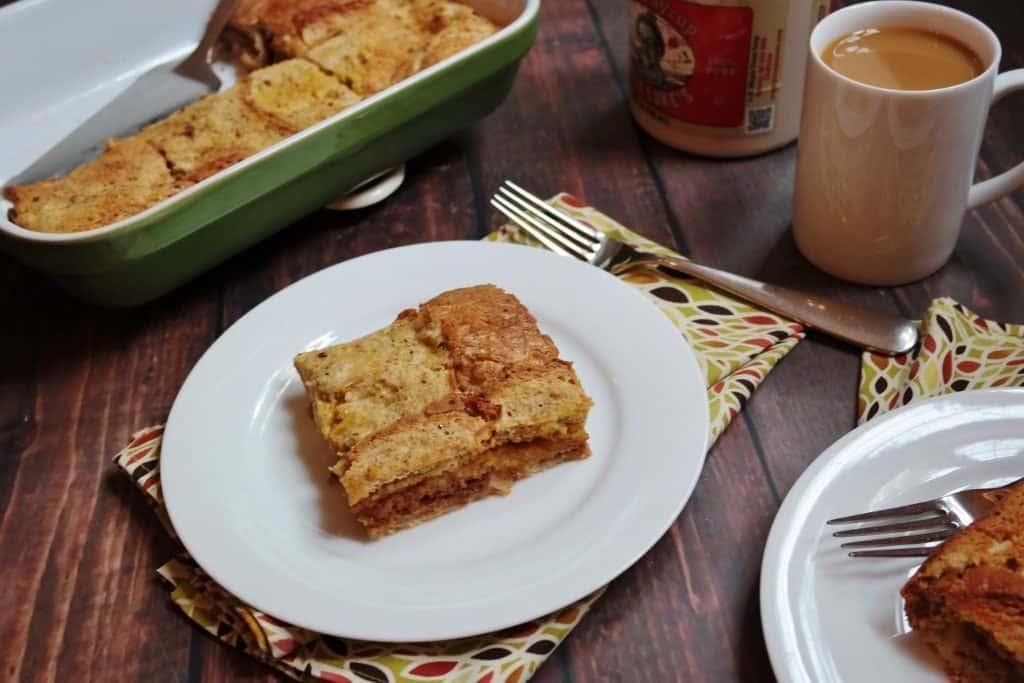 Oh, boy, do I have a delicious Fall brunch recipe for you guys. Definitely put it on your “must make” list for the season! But, first, some awesome news: I am now an ambassador for Dave’s Killer Bread, and I couldn’t be more excited about this partnership! I first tried Dave’s Killer Bread back in 2011 when Mal and I visited his sister in Seattle. It was love at first bite, but, sadly, the brand wasn’t yet available on the East coast. We looked into ordering it online, but, at the time, we didn’t have freezer space to store loaves of bread to make it worth it, especially with shipping costs. Long story short, every time we visited the West coast, we loaded up on Dave’s Killer Bread and hoped it would make it’s way to Massachusetts.

When we were in Oregon this past summer, we learned that Dave’s Killer Bread is available at Costco (and Sam’s) stores, so now we can get it whenever we want. (You can check here to see if Dave’s Killer Bread is available in your area.) And, of course, when the brand reached out about working together, I said “yes” immediately. It was a no-brainer. I love Dave’s bread because it’s just plain delicious, but also because it’s packed with fiber, protein, and whole grains. (I especially like the Powerseed variety, which is thin-sliced and just 60 calories.) Additionally, it’s USDA Organic, Non-GMO Project Verified, and free of the additives, preservatives, and fillers common in other breads, even the “healthy” ones. Now that October is here, I wanted to create an autumn-inspired recipe, one that included all of the wonderful flavors of the season– pumpkin, maple, cinnamon– and it wasn’t long before I came up with this recipe for Peanut Butter & Pumpkin-Stuffed French Toast. Dave’s recently launched White Bread Done Right, which has a classic taste and texture (and packs 10 grams of whole grains), so I knew it would be perfect for this recipe– and it was! Guys, I can’t even explain how amazing this stuffed French toast turned out. The bread was perfectly browned and slightly crisp on the outside and sooooo soft and gooey on the inside– thanks to peanut and pumpkin butter. Each bite was thick, soft, chewy, and rich in flavor and satiety. This recipe could easily hold its own at brunch with a simple fruit side and coffee. Perhaps for Thanksgiving morning? It’s best if you make it the night before you want to serve it, so all you need to do in the morning is pop it in the oven, which means you can sit, relax, and enjoy a leisurely breakfast with family and friends. Preheat oven to 350 degrees F. Spread peanut butter on four slices of bread and pumpkin butter on the other four slices. I used almost a tablespoon on each slice of bread, but use as much or as little as you’d like. For a richer stuffed-French toast, use more peanut and pumpkin butter per slice; use less for a lighter dish. (FYI: This recipe works great with end pieces!) Spray a rectangle baking dish with non-stick cooking spray and then layer peanut and pumpkin butter slices face up. It’s okay if the slices overlap. It’s actually great if they do because you’ll get peanut + pumpkin in each bite! Then, take the remaining four slices and place them face down on top of the other slices. Basically, you’re creating the “stuffed” part of the French toast. Next, combine the eggs, milk, cinnamon, and vanilla extract in a mixing bowl and whisk. Pour the entire mixture all over the bread as evenly as possible. Use a spatula to press down the slices, so they further soak up the liquid. This also helps combine the peanut and pumpkin butter inside. And using the spatula evens out the bread layers, so it comes out of the oven looking nice and pretty! Finally, cover the baking pan and refrigerate overnight. If you don’t have that much time, a few hours will work too. You just want to make sure the bread soaks up the liquid as much as possible. Bake for 45 minutes until the top is lightly browned and puffy. Allow to cool slightly and then cut into 6 pieces and serve alone or with maple syrup.