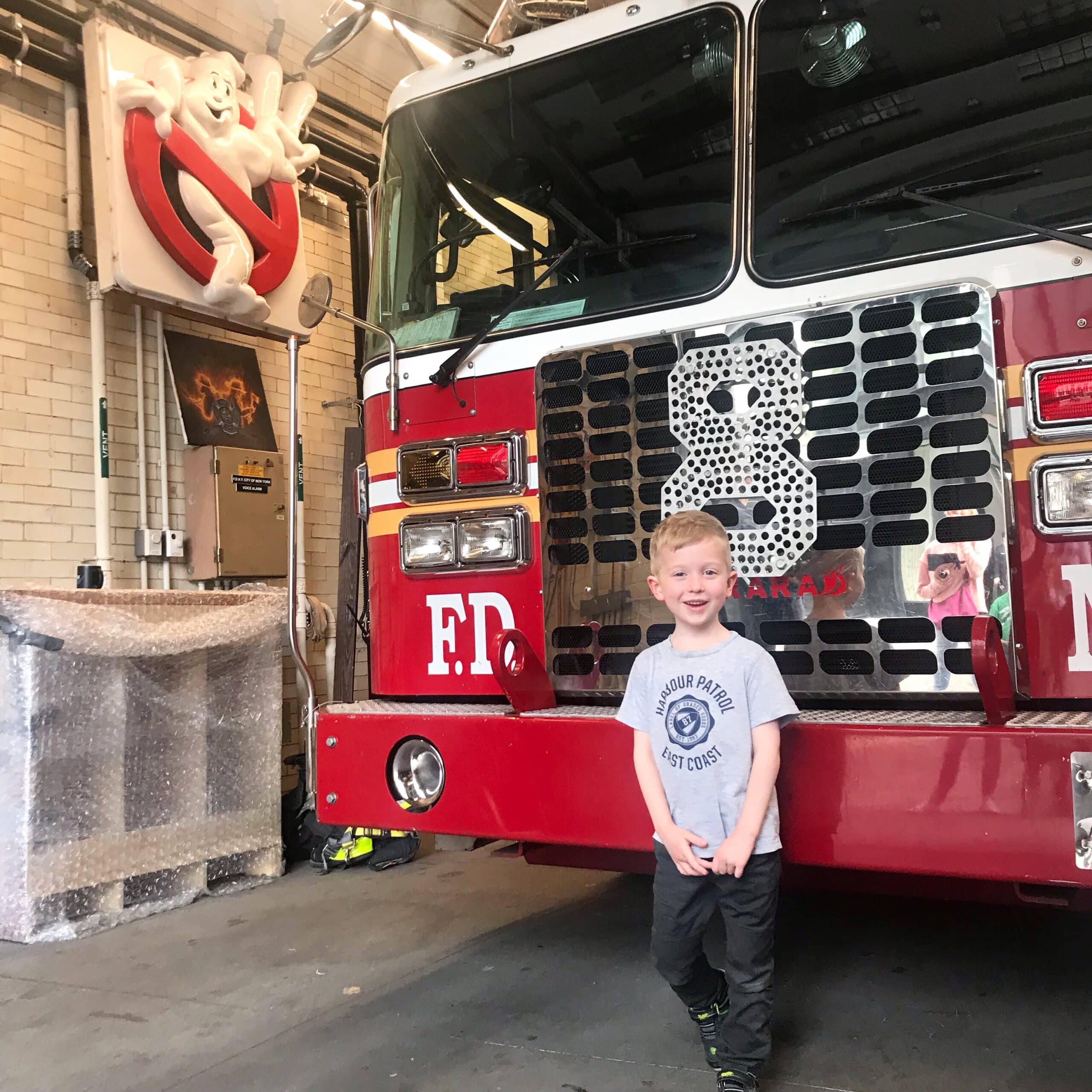 We had THE BEST time in New York City! It was our first family trip to the Big Apple. It was also Quinn’s first train ride, which was a huge hit (despite his expression below)! 🙂 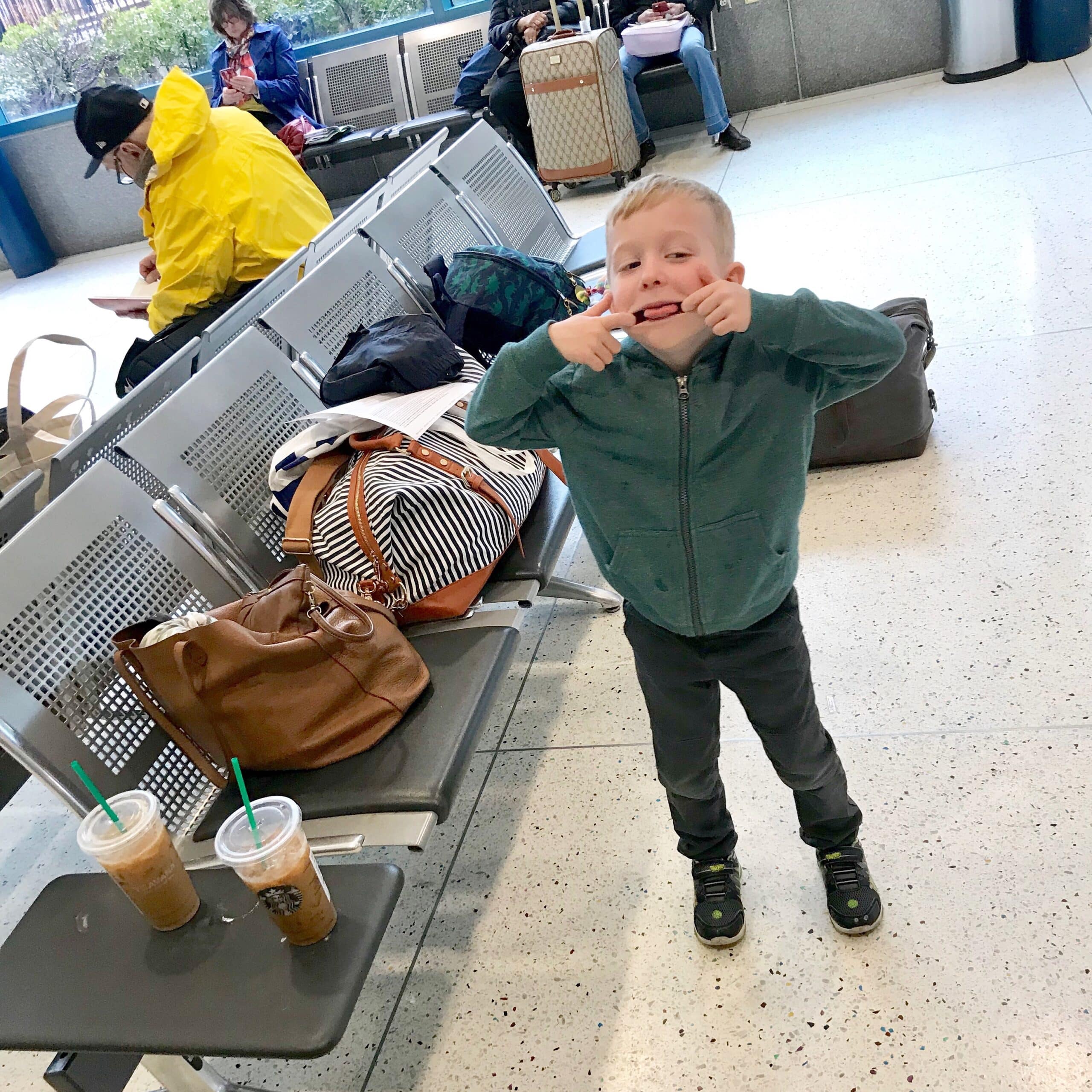 On Saturday morning, we took the train from Westwood/Route 128 to Penn Station, so it was about 4 hours from station to station. We opted for the Northeast Regional instead of the Acela to save some money, but the trip actually flew by! 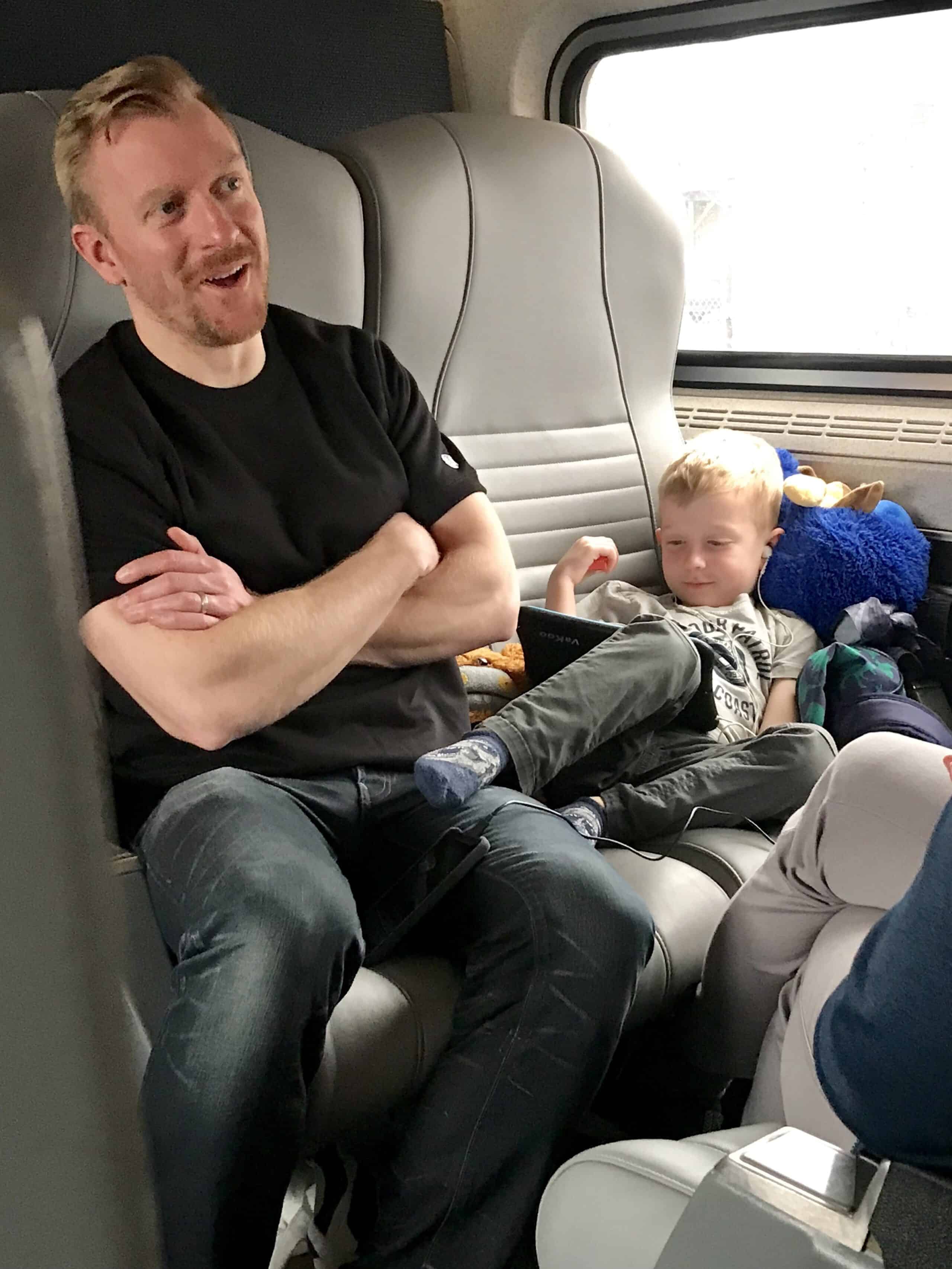 When we arrived at Penn Station, we hopped in a taxi to my friend’s apartment in the Village. We dropped off our bags and then headed out to City Vineyard for some lunch and drinks. It was a gorgeous day, so we took advantage of the weather and snagged a table outside, right on the water. It was quite lovely!

After that, we did some exploring, which included a visit to the Ghostbuster’s firehouse. Quinn was so psyched to see it. He loves the Ghostbuster movies!

Then, we stopped by Murray’s Cheese Bar to pick up some goodies for the evening. We got some seriously incredible cheeses – Romano, Gruyere, and Brie. Mmm! I actually don’t think I’ve eaten so much delicious cheese in one sitting! 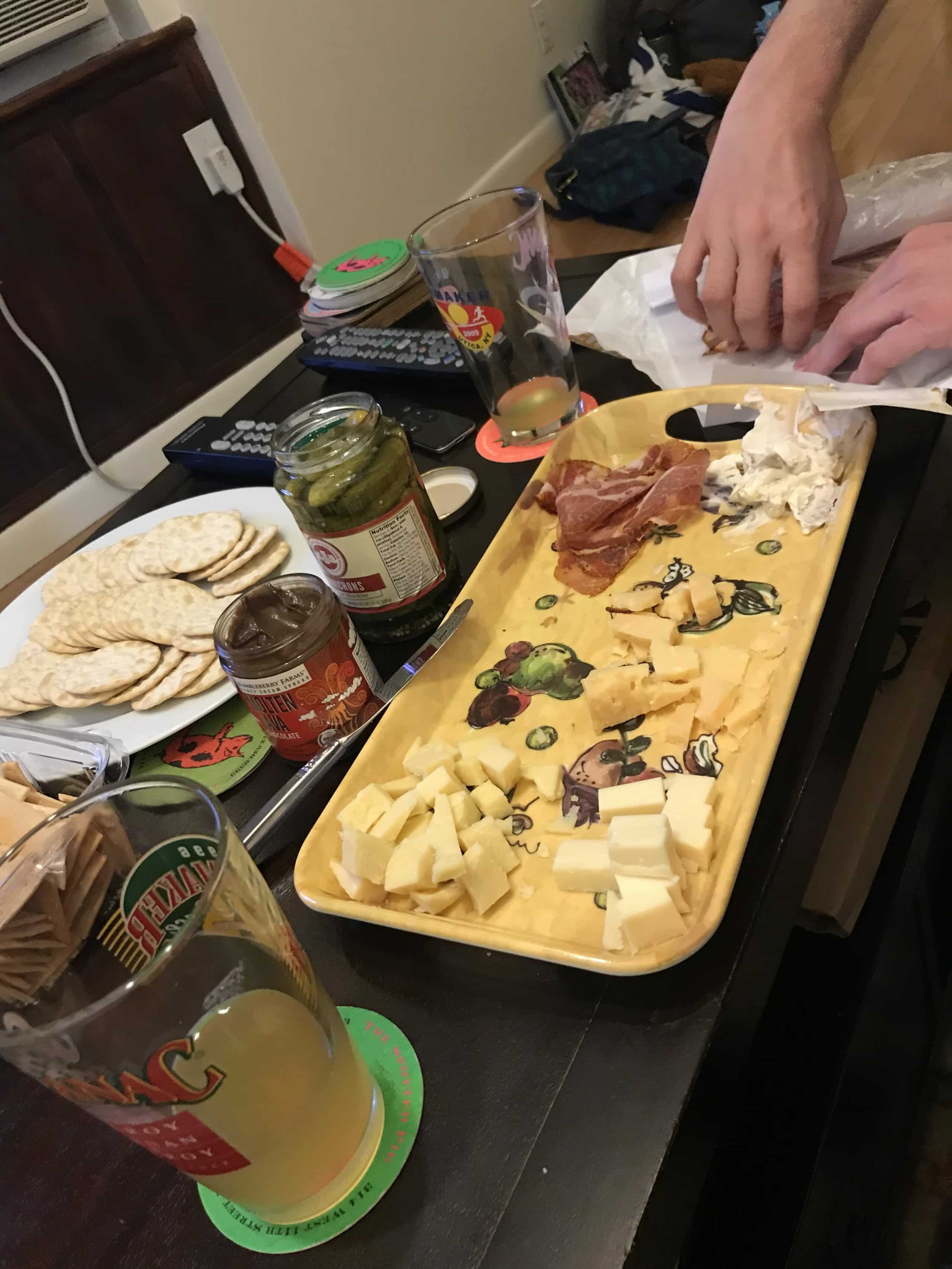 The next morning, we were up and at ’em with the sunrise, so our first order of business was iced coffee. We stopped into Partners Coffee for coffee and a delicious dount that we all shared. (How cute are Quinn’s little hands in the photo below?) 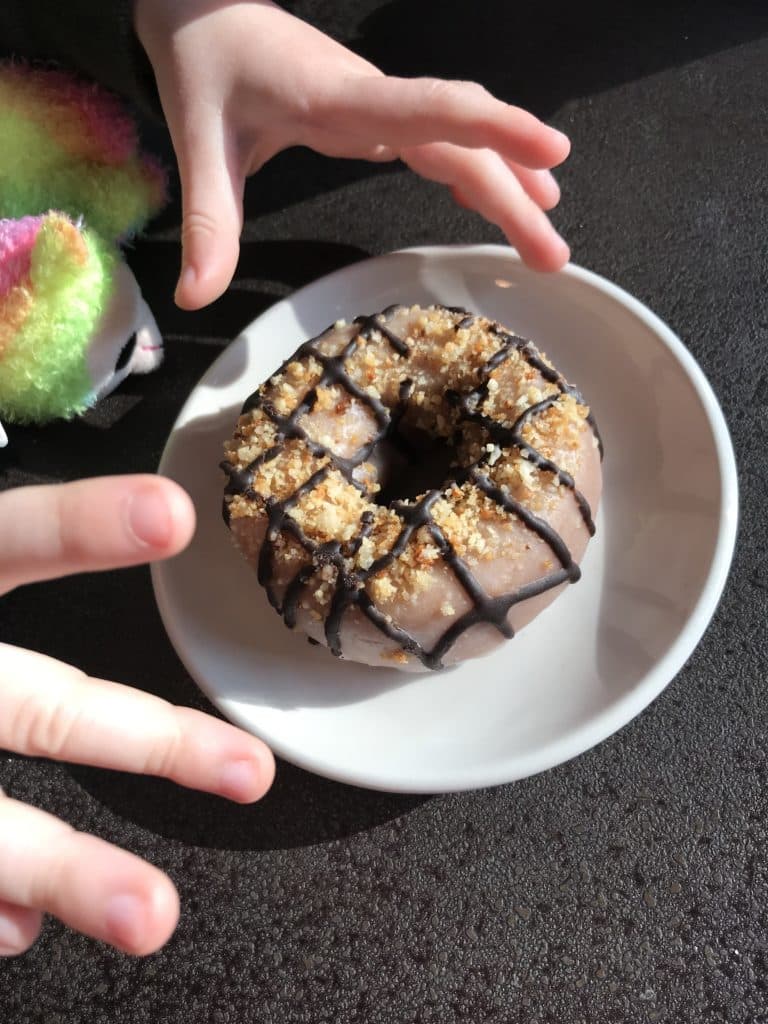 After that, we headed back to our friend’s apartment to get ready for the day. Once we were good to go, we walked to breakfast at Cafe Cluny, which was an absolutely adorable restaurant. 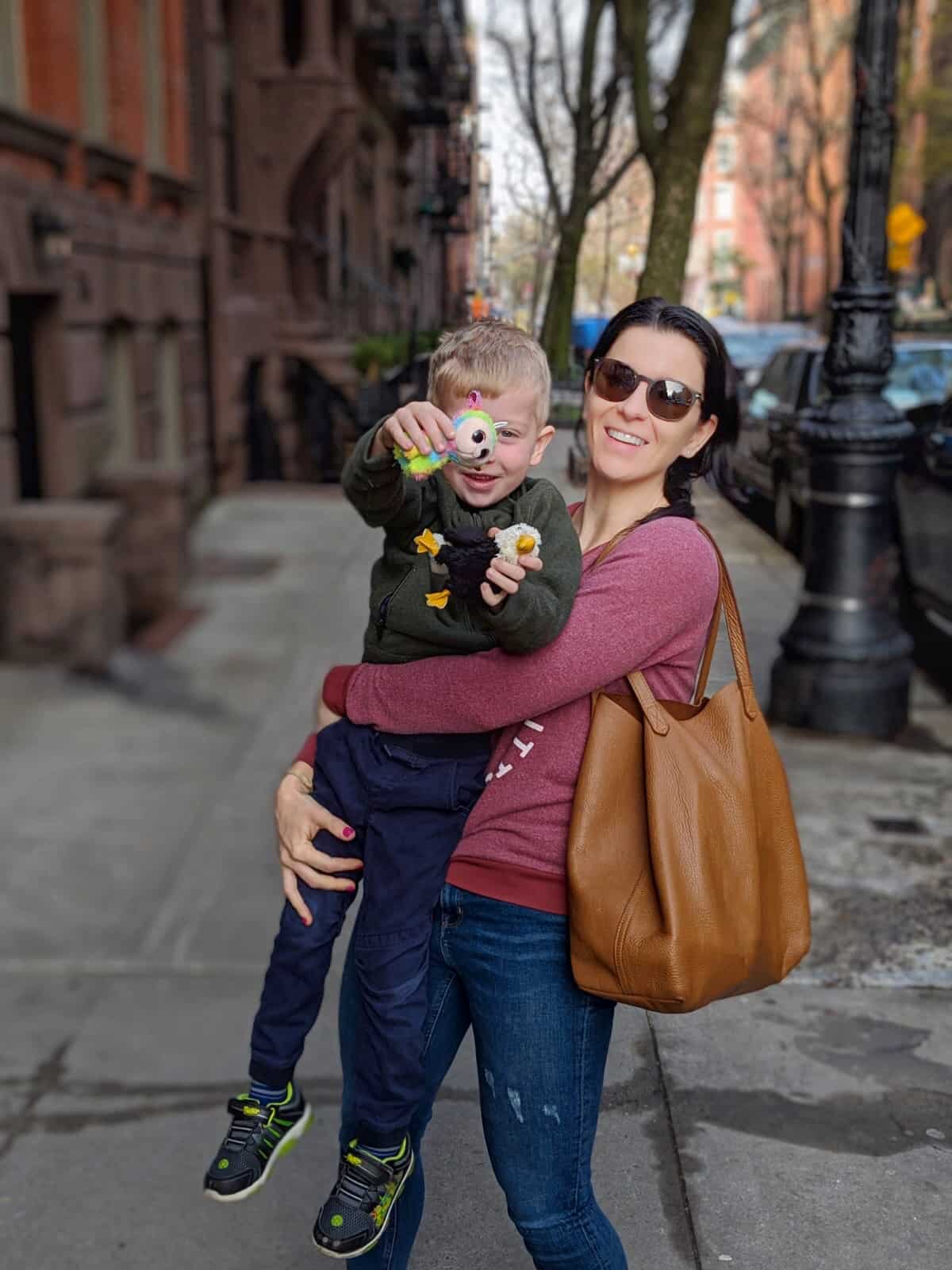 The menu at Cafe Cluny was a little pricey, but the food, service, and atmosphere were all excellent! #worthit 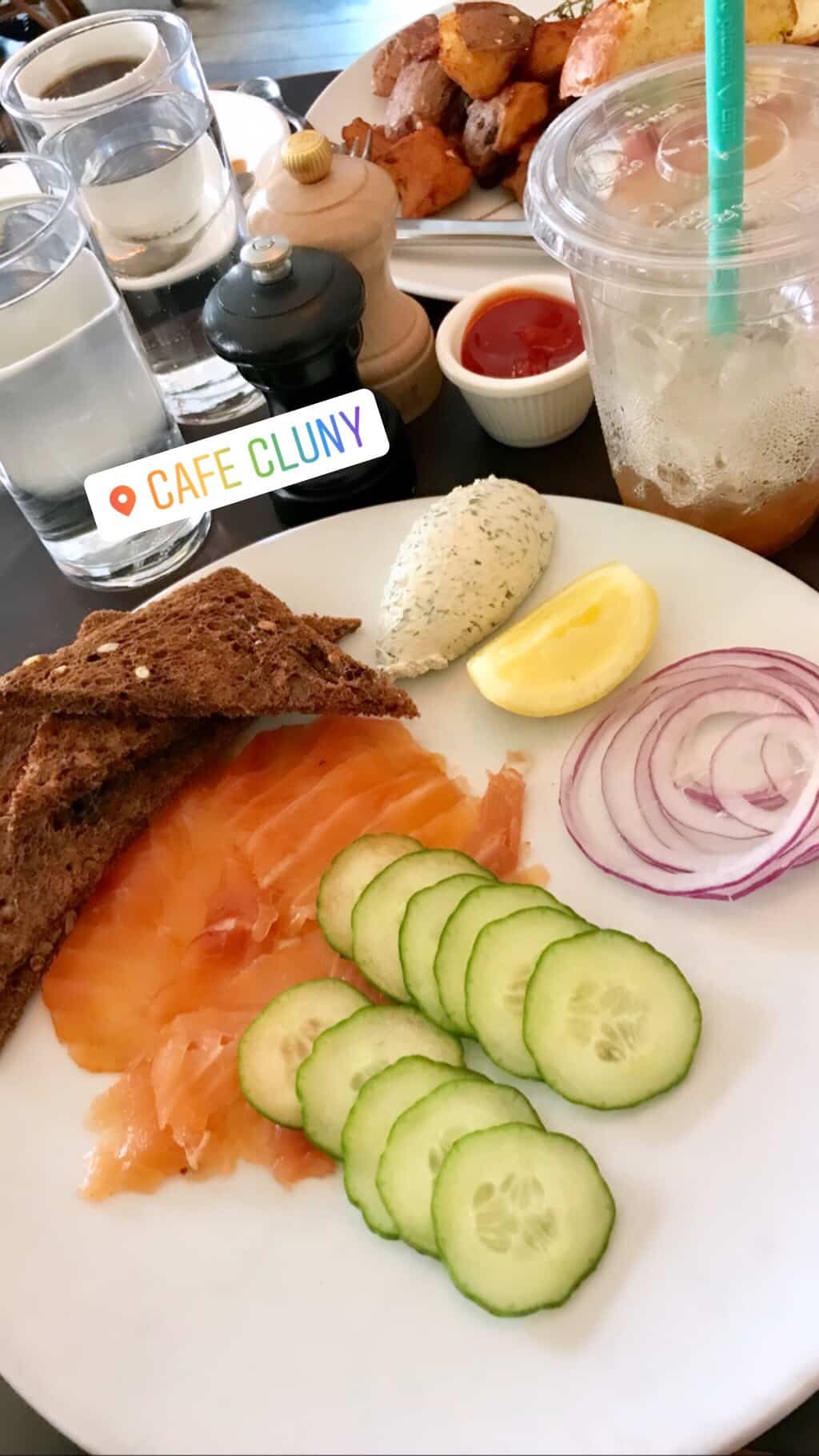 After breakfast, we took at taxi to FAO Schwarz and did a little shopping. Quinn had such a fun time checking out all of the different toys and picking a “tiny prize” as a souvenir from New York City. We also stopped into the nearby LEGO store. It was cool, but there wasn’t all that much to it. 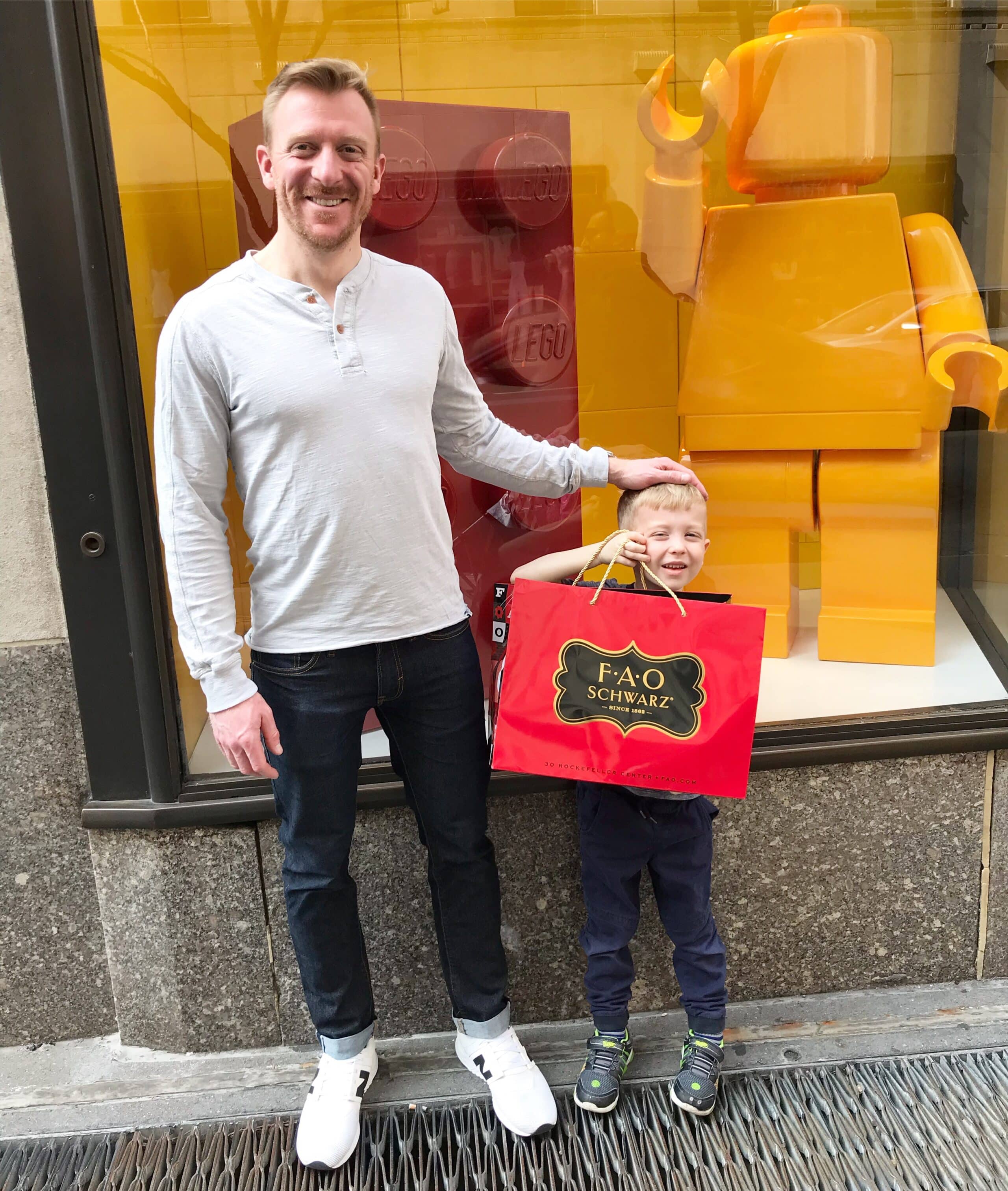 We were basically in and out of the LEGO store before taking a stroll up to Central Park. 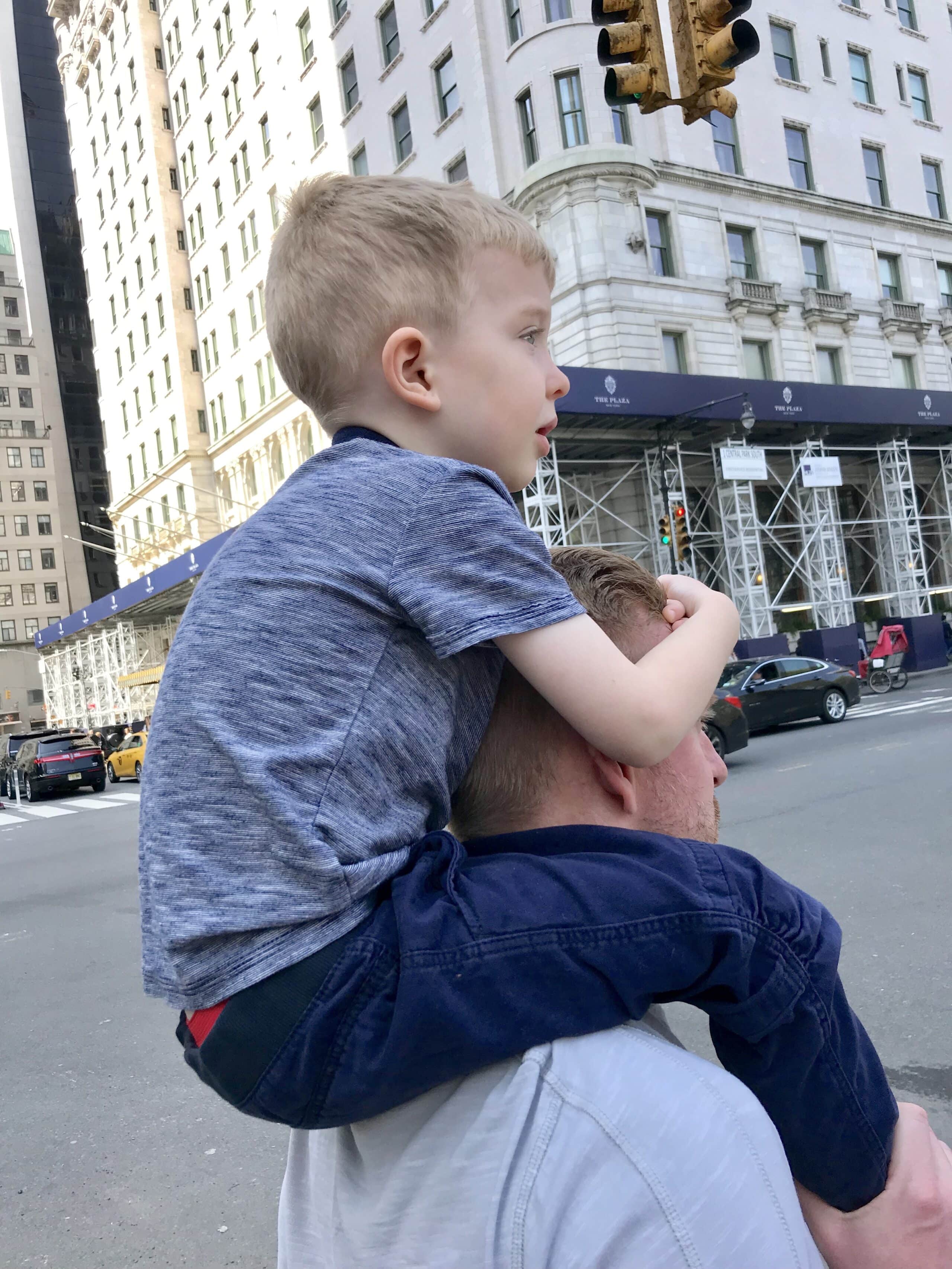 We walked around the park and eventually found a really great playground where we stayed for quite awhile before getting hungry for lunch. 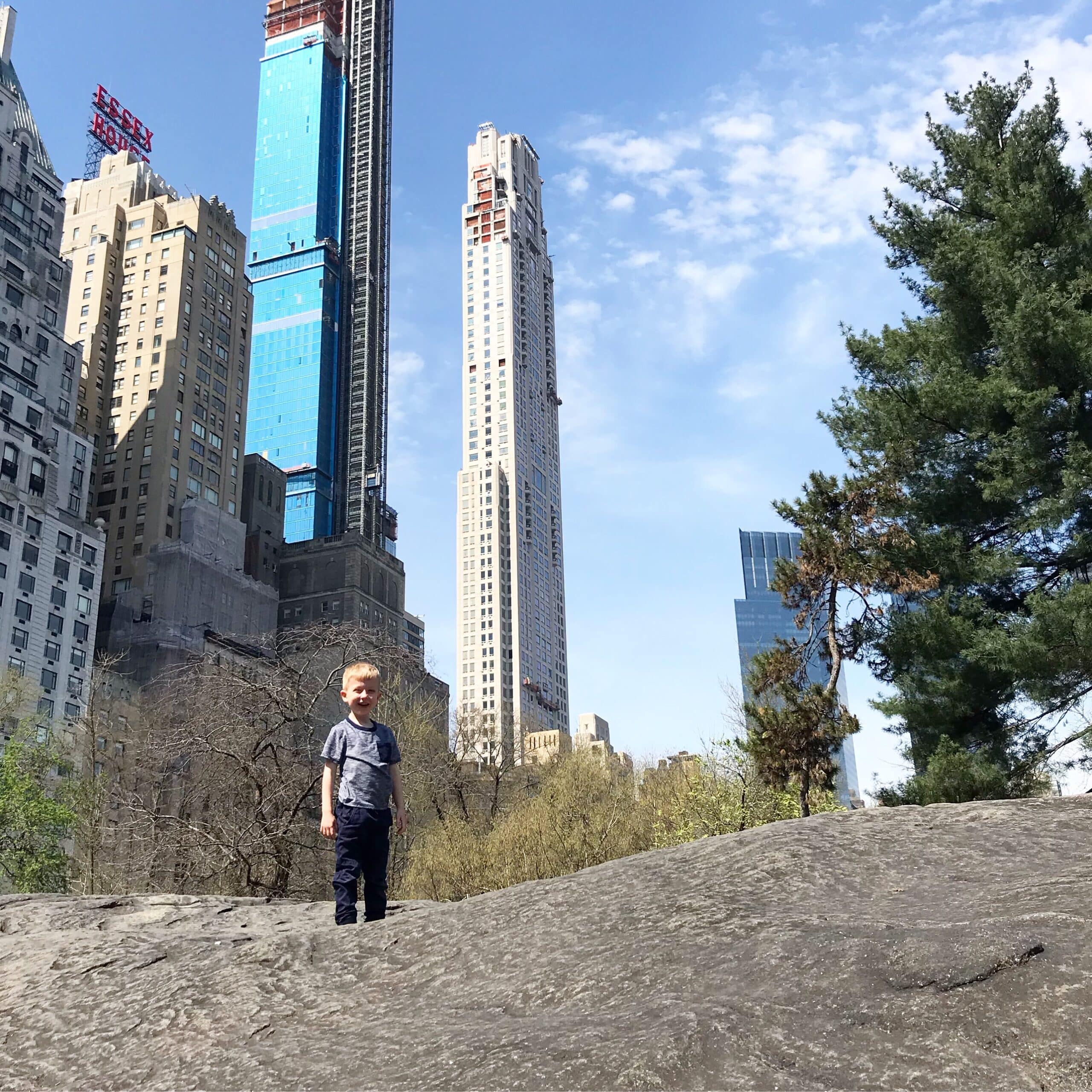 Before we got into a taxi to meet our friends, we stopped by The Doughnut Project. I heard they had the best doughnuts in the city, and the glazed doughnut was indeed amazing! 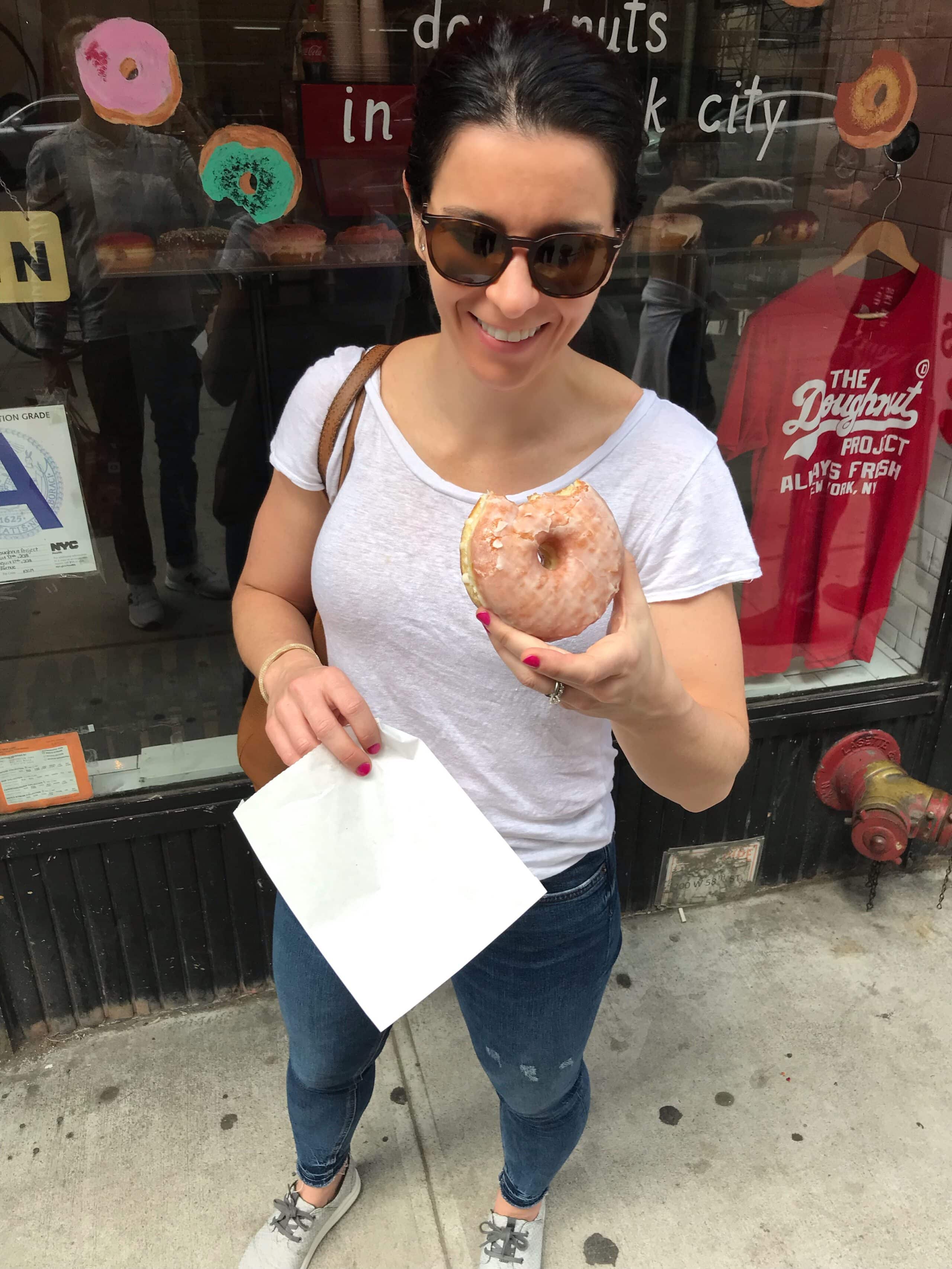 We met our friends at Upright Brew House for lunch and drinks. I drank a ton of wine, ate one million French fries, and then finished off the afternoon with some banana pudding from Magnolia Bakery. It was quite the epic afternoon! 🙂 We also did some shopping in the area and then stopped by the Sex and the City apartment, which was so cool to see. I was such a super fan when the series was on TV… and for many years afterward! 🙂 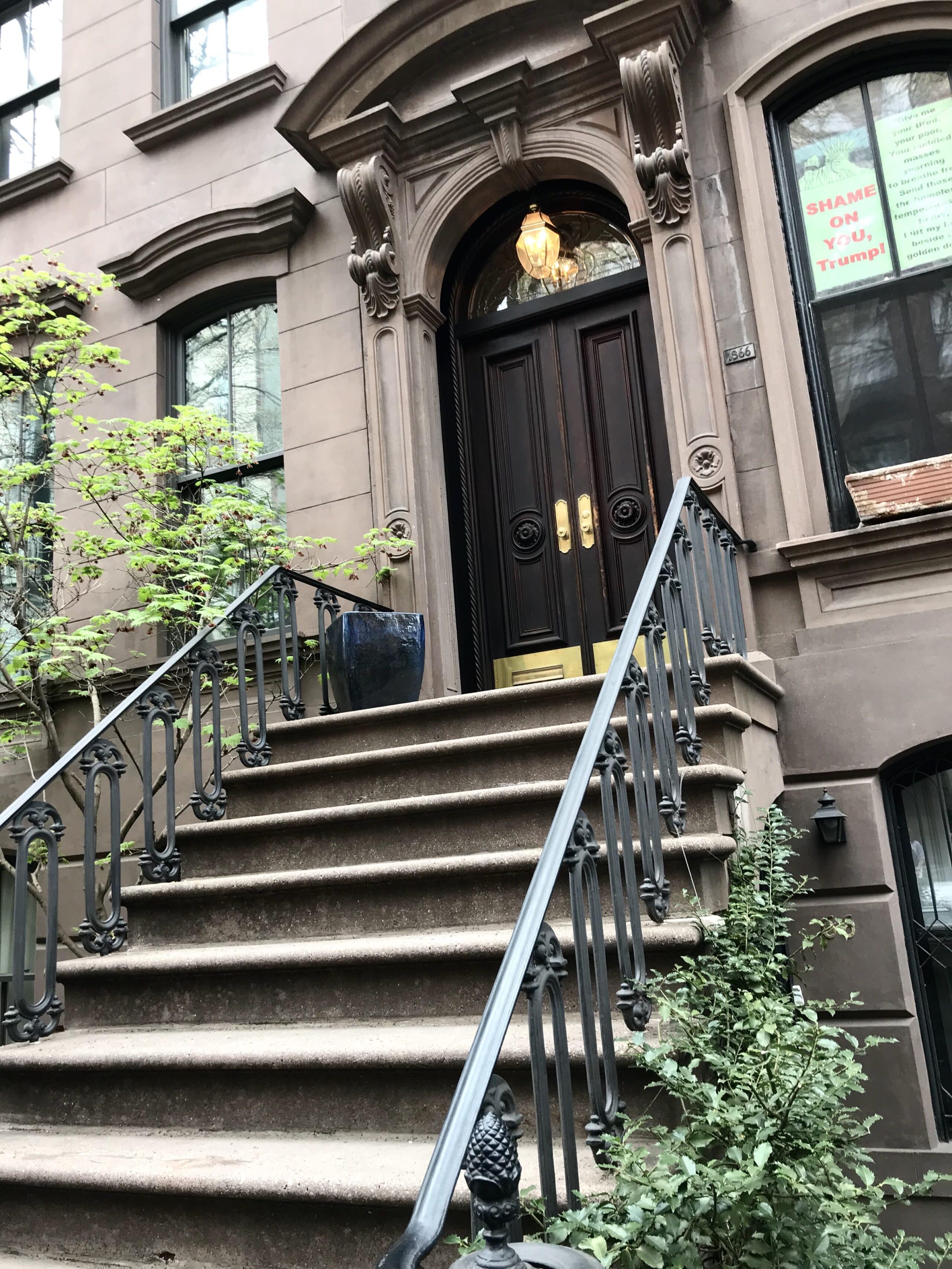 Sunday night was low-key. It included another amazing cheese plate and Game of Thrones at our friend’s apartment. I’m not currently a fan of the series, but Mal and our friends might have finally convinced me to watch it from the beginning. For the record, I fell asleep the first time I tried to watch the series and then fell asleep during the episode on Sunday night. Sooooo, we’ll see how things go. I know so many people love Game of Thrones, so I’m going to give it another chance.

On Monday, we grabbed a leisurely breakfast at Rosemary’s (another adorable restaurant) and then headed to Penn Station to take the train home. All in all, it was a wonderful trip to New York City. Quinn actually said he wants to visit again soon and stay for “10 days” next time! 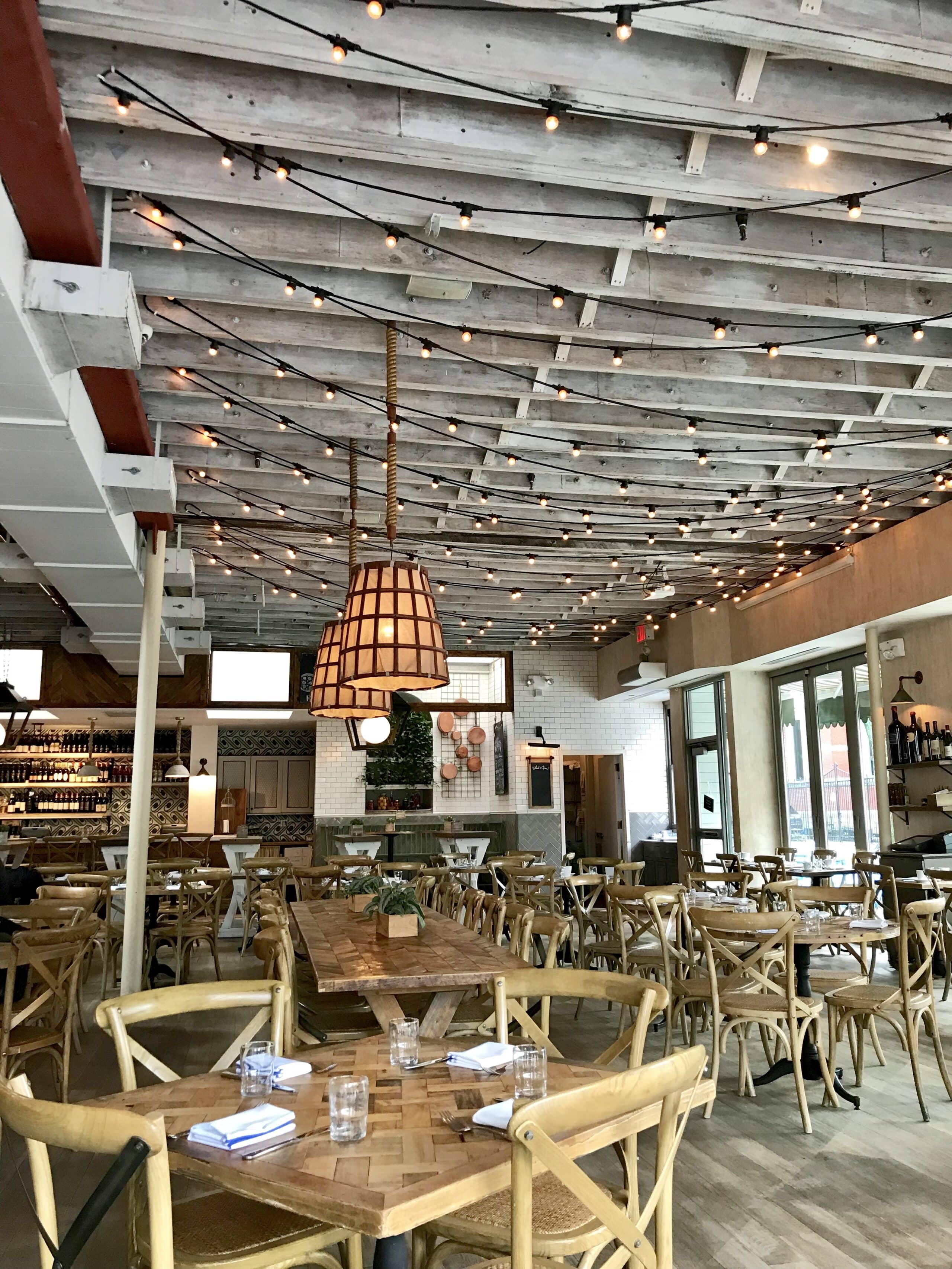 Are you a fan of Game of Thrones? If so, why do people like it so much?