Napping the Day Away

So, guys, I’m back home in Beantown.

A huge snow storm was supposed to hit New York City late yesterday and early this morning, so I took an earlier flight back to Boston to avoid the bad weather. My original flight was scheduled for this afternoon, but it was likely to get canceled due to snow, so I flew back late last night. I wish my NYC trip didn’t have to end so abruptly, but I wanted to make sure that I got home to see my boys sooner than later.

Mal picked me up from the airport at almost midnight last night, so I thanked him by making breakfast for him before school this morning. Plus, it wouldn’t have been fair to sleep-in when he stayed up so late to do me a favor, ya know? I’m happy to make him breakfast anyway! 😉

I made us some stovetop oatmeal with cinnamon, brown sugar, vanilla extract, and ground flaxseed meal. Mal and I both thought this batch tasted like French toast! I topped our bowls of oatmeal with Wild Berry Mix from Eden Organic that the company recently sent me to sample. I also tried their Carob Soymilk in my iced coffee. The Carob Soymilk wasn’t super chocolaty like chocolate soymilk, but it was still a nice addition to my iced coffee. It added a much more mild sweetness than soymilk. 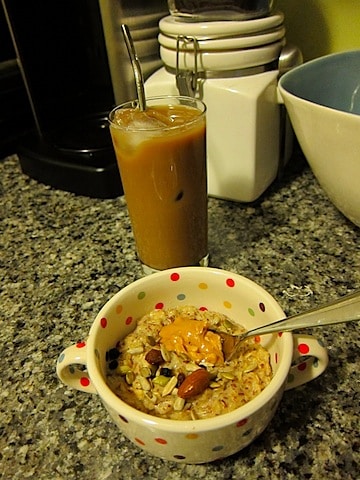 I really liked my lunch today!

I had a container of Chobani pomegranate Greek yogurt mixed with sliced kiwi and some Wild Berry Mix. Mmm! I loved all of the fruity flavors. It was sooooo good! 😀 After lunch, I totally crashed. I woke up bright and early with Mal at 6:00 am, but by 1:00 pm, I was exhausted. I slept on the couch with Murphy for almost 3 hours straight without waking up once. I guess I needed the sleep, but I’m sort of bummed that I wasted those hours. 😕

As an afternoon snack, I ate a whole wheat pretzel with a scoop of Barney Butter and a mug of Sugar Cookie Sleigh Ride tea on the side. I also snacked on a bunch of pistachios when Mal broke out the bag. I can’t say no to those things! We have zero food in our house, so I think we’re getting take-out for dinner. I’m kind of in the mood for sushi… maybe Mexican?

My One Second of Fame

If you watched Live! with Regis and Kelly yesterday morning, you may have caught a glimpse of me in the audience.

Check out this photo that Sabrina sent to me. Do you see me in the second row? I’m in the middle left of the photo next to Megan. You can also see Megan and me around the 0:20 mark in the online video of the show. So fun!

PrevPreviousKelly’s Cake Off for a Cause
NextSnowed In = Take OutNext