My Friends (and Me) In Magazines 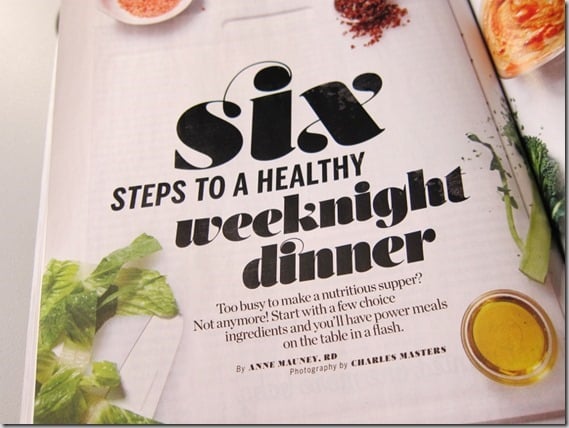 Thank you for all of your wonderful comments and suggestions on my post yesterday. I spent the majority of last night pouring over them and making adjustments to our baby registry, so now I am feeling really good about things. You guys had so many great recommendations! Thanks, again! I’m lucky to have such awesome readers!

So, I had a nice little Tuesday.

I cashed in my Valentine’s Day gift certificate from Mal for an amazingly relaxing prenatal massage. Between pregnancy, CrossFit, and sitting at a desk all day, I definitely needed it! After my massage, I hit up Trader Joe’s for this week’s grocery shopping.

Murphy is totally saying: Mom, you always go overboard at Trader Joe’s! It’s true, I did, but it’s all part of my plan! (Grocery budget post for this week coming soon!) Then, I headed home for lunch, which took just a matter of minutes to throw together, thanks to some tasty leftovers: mashed sweet potatoes with chicken breast, chopped steamed kale, and crumbled feta. Delicious! So on my flight to Savannah a couple of weeks ago, I packed a bunch of magazines. It was only a little more than 2 hours from Boston, so it was the perfect amount of time to catch up on my reading.

As I perused the magazines, I stumbled upon a number of pieces that featured some of my friends who I’ve met through blogging. I always get so excited when I see a name of someone I know in print. Also in Runner’s World, Laura Beachy, who works with us bloggers on fun RW’s stuff. Also in Health, Maria from Two Peas & Their Pod with a quote about her favorite juicer. And, in the same article, a quote from ME about my beloved BELLA NutriPro juicer! So cool! If you could only read ONE magazine for the rest of your life, which one would it be?