My Buddy and Me 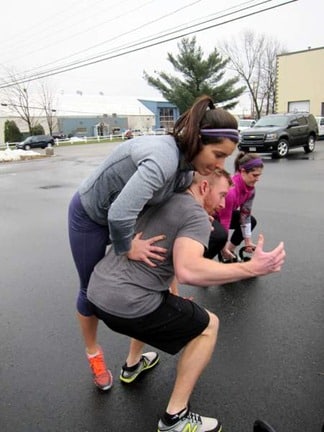 After breakfast, Mal and I headed to CrossFit for a (FUN) partner workout.

Our coaches wanted us to match up with someone of a different athletic ability (i.e. guy + girl), so Mal and I teamed up for our second ever partner WOD. (Remember our first one together? It was so fun and we killed it!)

In teams of two:

A) In teams of two, take 15 minutes to work up to max push jerk, for combined weight.

B) With a clock running for 10 minutes, complete:

400m Buddy Carry
*Carrying a buddy AND a kettlebell

With remaining time, AMRAP unbroken KB swings
*If you break KB swings, your partner starts their set of swings, and so on.

For the first part of the workout, I worked with another gal, who partnered up with her husband. Instead of adding and stripping the weights when we lifted with our husbands, we worked together since we were of similar strength. We started at 65 pounds for the Jerks and worked our way up to 115, which was a 1RM max for me!

Then, it was time for the 400 meter Buddy Carry, which was hilarious. I don’t know why I think Buddy Carries are so funny””maybe it’s because I’m so awkward and clearly have no idea what I’m doing””but I laughed almost the entire time. Mal did the first 200 meters with me on his back. I forgot to add that we had to hold a kettle bell while carrying our partner. Hahaha! I have no idea what he’s saying”¦ And then it was my turn”¦ Tip: Pick up the kettle bell before you pick up your partner. It’s a lot easier! After the Buddy Carry, Mal and I busted out 131 kettle bell swings. We alternated unbroken swings until we ran out of time. I know I’ve said this before, but CrossFit is like playtime. I felt like a big kid doing half the stuff we did today. So fun!

A huge THANKS to Kerrie for snapping these pics!

After CrossFit, I refueled with a vanilla-coffee protein shake made with vanilla fitmixer protein powder, decaf iced coffee, almond milk, and ice. A little while later, I broke out some leftovers from last night’s dinner at Stockholders. They were quite tasty reheated! After lunch, I enjoyed an amazingly delicious brownie in a mug that my friend Kerrie blogged about the other day. I didn’t have almond butter or baking soda, so I used peanut butter and baking powder instead, which worked out well. Here are the measurements I used:

Do you ever work out with your significant other?