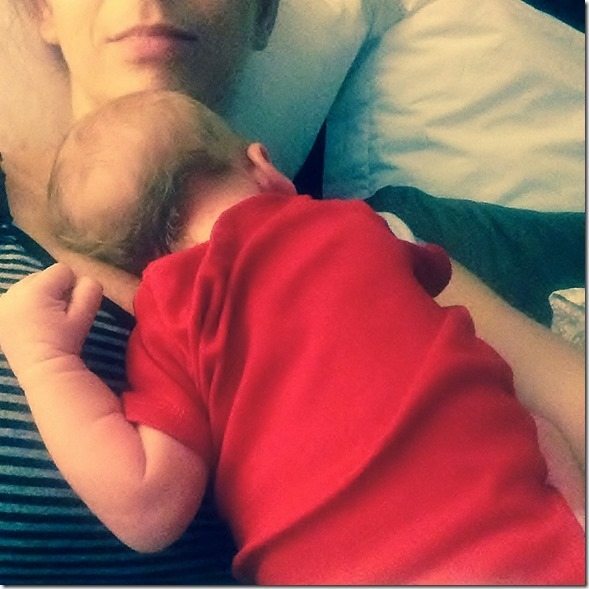 I celebrated my 34th birthday yesterday! The day ended up being pretty low-key, but it was exactly what I wanted. I started my day with a delicious glass of Marylou’s white chocolate chip iced coffee with iced coffee cubes and chocolate almond milk in the mix. This flavor combo = AMAZING. Mal, Q, and Murphy were all sound asleep when I woke up, so I snuck into my office to do some work. A couple of hours later, everyone woke up and my birthday celebration began. Woohoo! (Llama = Napoleon Dynamite) The celebration started with presents. Mal bought me a gift certificate to a local spa. (Best husband ever!) And then he said he had something else for me and kept saying: “I hope you have a cool birthday” over and over again like a weirdo. I eventually caught on and opened the refrigerator to find present #2.

Honest Tea Half & Half!

Ever since I tried it last week (the folks from Honest Tea recently sent me a bottle to sample), I’ve been obsessed with it. It’s so frickin’ good. It was also on sale at Whole Foods this week, which is why Mal picked up a couple more bottles for me. What a guy. While I opened my presents, Mal (and Murphy) cooked breakfast for me. Murphy and I played a quick game of “Pac Pug” while we waited.

Mal made a batch of his special blueberry pancakes for my birthday breakfast and, boy, were they delicious! I’ll share the recipe with you guys soon. It’s incredible! Mal’s pancakes are so light, fluffy, and cake-y. After breakfast, I hung out around the house””chilling with my boys and doing some chores. I ended up getting really tired in the early afternoon, so Mal encouraged me to take a nap. Hey, it was my birthday and all, so he took over the baby duties while I snoozed for about an hour or so with my favorite pug. It’s crazy how a nap is now a highlight of my birthday celebration. Haha! I felt a lot more energized when I woke up from my nap, so Mal and I headed out with Q and Murphy for a walk around the neighborhood. It felt great to get moving and soak in the sunshine! Murphy was pooped after our walk! That face! Haha! It was almost dinnertime when we got home from our walk, so Mal suggested that we order sushi, which, of course, was the best idea ever. I haven’t had “real” sushi since before I was pregnant (just California rolls), so I was especially pumped. And it tasted as wonderful as I remember! After dinner, there was singing and birthday cake. We didn’t have birthday candles, so Mal improvised with a long Duraflame match. Haha! He’s so resourceful! The cake flavor was a dark, fudge-y chocolate with a cheesecake layer on the inside. Holy yum! And, finally, my birthday ended with baby snuggles in bed. Best birthday ever. P.S. Be sure to enter my giveaway to win a Fitbit Flex along with some other health-inspired goodies! I’ll pick a winner on Monday!